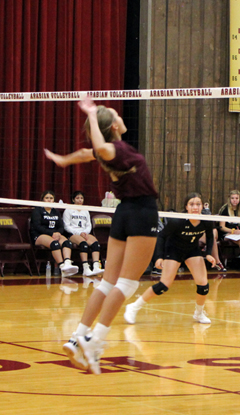 The Arabians may be done with the tournaments but their season is far from over. Now at 15-10, added a win and a loss to their record after facing La Vernia on Tuesday and Marion on Friday. Next week they will take on Crystal City and Fredericksburg. Then their last non-district game will be against SA Feast on September 21st. On October 1st they will face Young Women’s Leadership Academy to open district.
On August 31st, the Arabians fell to La Vernia at 25-14, 25-14, and 25-23. They fought hard in the last set to stay in the game but it wasn’t enough. “We really struggled all around tonight. Our passes were not where they usually are and then that affects the flow of the offense. We did pick up our intensity during the third set and played more at the level we should be playing at. We are coming off four straight weekends of games and tournaments so we are going through some physical and mental exhaustion. This is something we see every year and we are always able to overcome and be successful the rest of the year,” said Coach Leigh Anne McIver.
Zoe Gonzales 2 kills, 1 dig. Avery Cruz 13 digs. Rylee Esquibel 8 kills, 1 block, 13 digs, 1 assist. Kristina Moralez 2 aces, 11 digs. Bailey Oropeza 1 dig, 1 assist. Darian Alvarez 3 kills, 1 dig. Brooklyn Miller 2 kills, 3 digs. Macey Hein 3 kills, 2 blocks, 12 digs, 20 assists. Aleyna Gerlach 4 kills, 2 digs, 1 assist. Skylar Blanton 2 kills. Cece Martinez 6 digs.
Friday night against Marion was a different story that ended in a win for Devine. “We started the night off really well. We looked a lot better on offense, really controlling our swings, being aggressive and limiting our errors. We hit a snag in the third set, lost our focus for a little while and made too many errors that let Marion back into the game. But we kept our cool and we were able to finish the game,” said Coach McIver. Devine pulled out the win at 25-14, 25-13, and 32-30.
Gonzales 2 kills, 1 dig. Cruz 15 digs. Esquibel 12 kills, 15 digs. Moralez 1 ace, 3 digs. Oropeza 3 digs. Alvarez 4 kills, 1 block, 3 dogs. Miller 2 kills. Hein 1 kill, 3 aces, 2 blocks, 3 digs, 30 assists. Brianna Torres 1kill. Gerlach 7 kills. Blanton 1 kill, 2 digs. Martinez 2 aces, 6 digs.
By Dicy Chambers
Sports Writer