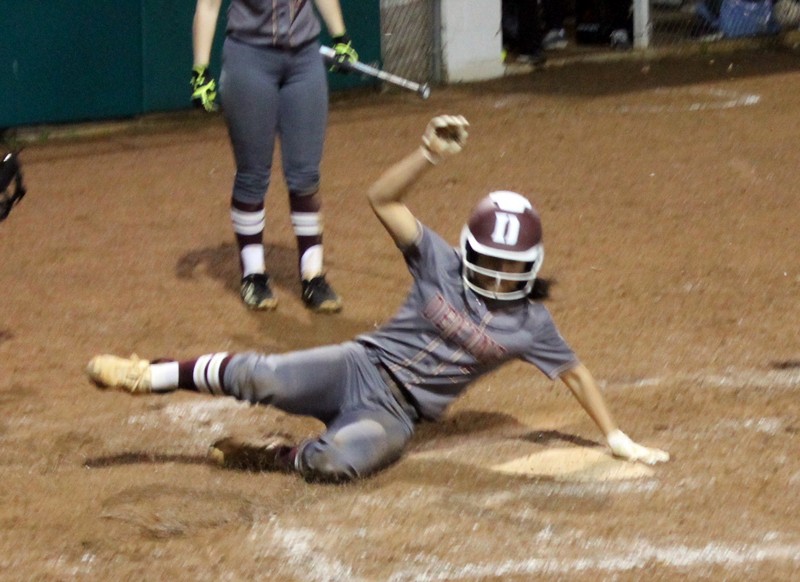 Last weekend the Arabians traveled to Huber Ranch in Seguin for the Navarro Softball Tournament. Facing six teams over three days, the Arabians had to work hard to earn their runs. They ended the tournament 2-4 but played aggressively and worked on their skills every game.
Karnes City
In their first game of the tournament last Thursday, the Arabians faced Karnes City and lost in the final inning when Karnes City scored 4 runs to Devine’s single run. The final score was 5-4 Karnes City.
“We played a great game up until the 4th where we had two costly errors that allowed Karnes City to take the lead. We have to be able to handle tough situations mentally and stay in control and aware of the game,” said Coach Juan Gonzalez.
Jeanette Rios 1 run, 1 walk, 1 strike out. Julie Ortiz 1 run, 1 hit, 1 strike out. Kendall Arche 1 walk, 1 strike out. Jessie Ramirez 2 hits. Mackenzie Schneider 1 run, 1 walk. Halle Hagdorn 1 walk, 1 strike out. Isabella Gutierrez 2 hits. Mackenzie McClellen 1 walk, 1 strike out. Aaliyah Terrazas 1 run. Gutierrez pitched 84 pitches with 4 strike outs, 5 walks, allowed 5 hits. McClellen threw 8 pitches, 2 strike outs and 1 walk.
Jourdanton
Their second game on Thursday was against the Jourdanton Squaws and Jourdanton took the lead in the bottom of the first but Devine answered with 2 runs in the second, 1 in the third, 2 in the fourth, and 2 in the fifth before Jourdanton could score again. The Arabians won 7-2.
“We played a great game vs. a good Jourdanton ball club. We scored 7 runs on 11 hits, 7 stolen bases and a solo Home Run by DP Hagdorn. Ortiz, Coronado, and Ramirez all had multiple hits for us. We played solid defense committing zero errors behind our pitching,” said Coach Gonzalez.
Ortiz 2 runs, 3 hits, 2 RBIs, 1 walk. Dasslyn Coronado 2 runs, 3 hits. Arche 1 hit, 1 RBI. Arieana Ramirez 1 run, 1 hit, 1 RBI, 1 walk. Hagdorn 1 run, 1 hit, 1 RBI, 1 walk. McClellen 1 run, 1 strike out. Gutierrez 1 run, 1 walk. Lindsey Herrera 1 strike out. Dawn Morris 1 hit. Schneider had 43 pitches with 3 hits against and 2 walks. McClellen had 36 pitches with 4 hits against, 1 strike out, and 1 walk.
Eagle Pass
On Friday, the Arabians faced Eagle Pass and lost 4-8. “Overall both teams played a good game. Where Eagle Pass got us is their timely hitting. We had 9 hits to their 11 hits of the game; the big difference is when the hits came. Eagle Pass ended the game with 8 RBI’s to our 1 RBI of the game. Tells me that our hitting was sporadic and did not come with runners in scoring positions, but none the less we’re still hitting the ball so that’s good. Another good game defensively committing no errors,” stated Coach Gonzalez.
Rios 1 run, 1 hit, 1 strike out. Ortiz 1 hit, 1 strike out. Arche 1 run, 1 hit, 1 RBI. J. Ramirez 1 run, 1 hit. A. Ramirez 1 strike out. Schneider 1 hit. Hagdorn 1 hit, 1 strike out. Gutierrez 1 run, 2 hits. McClellen 1 strike out. McClellen threw 74 total pitches with 8 hits allowed, 5 strike outs, and 1 walk. Gutierrez had 15 pitches with 3 hits allowed and 1 walk.
Poth
Devine held the lead against Poth until the bottom of the third when Poth scored 5 runs in one inning to tie the game up. After 6 innings, Poth would win 9-7. “We lost in a tie breaker to a fast Poth team. We had an early lead getting up on Poth 5-0 into the 3rd inning which is where things started to unravel. We committed 6 defensive errors in the game. The girls kept battling, but we couldn’t overcome the impact the errors had on us,” said Coach Gonzalez.
Rios 1 run, 2 hits, 1 RBI. Ortiz 1 hit, 1 walk. Arche 1 RBI. J. Ramirez 1 run, 2 hits, 1 RBI. Schneider 2 runs, 1 hit, 1 walk. Hagdorn 1 run, 1 hit, 1 walk. Gutierrez 1 run, 1 walk. McClellen 1 run, 1 hit, 2 RBIs, 1 walk. Gutierrez had 58 total pitches with 4 hits against, 3 strike outs, and 3 walks. McClellen had 50 total pitches with 2 hits against, 4 strike outs, 2 walks.
Navarro
Their third game on Friday was against Navarro and Devine couldn’t score a run until the top of the fourth but Navarro was ahead by 5. Devine fell to Navarro 1-5. “Again I think it was a case of getting those timely hits, and Navarro got them collecting 6 RBI’s on 8 hits, 7 stolen bases. We had 5 hits with 1 RBI,” stated Coach Gonzales.
Ortiz 1 hit. A. Ramirez 1 run, 1 hit. Schneider 1 hit. Hagdorn 1 hit, 1 RBI, 1 walk. Gutierrez 1 hit. Schneider threw 68 pitches with 8 hits against, 2 strike out, 3 walks. Gutierrez had 8 pitches with 1 strike out.
Marion
In their final game on Saturday, the Arabians had some players back from the Varsity basketball team and won against Marion 8-5. “We got off to a rocky start walking 4 batters in the 1st inning, but managed to pick it up as the game went on. We scored 8 runs on 9 hits, and committed no errors. Arieana Ramirez and Kendall Arche both had multiple hits for us, and Jr. Halle Hagdorn led the team with 3 RBI’s on a hard hit ball to left field,” said Coach Gonzalez.
Ortiz 1 hit, 1 RBI. Allison Taylor 1 hit, 1 strike out. Arche 2 runs, 2 his, 1 walk. A. Ramirez 1 run, 2 hits. Gutierrez 1 run, 1 RBI, 2 walks. Megan Runyan 1 run, 1 RBI. Morris 1 run. Hagdorn 1 hit, 3 RBIs, 1 walk. McClellen 1 run, 2 hits, 1 RBI. Herrera 1 run. Gutierrez threw 97 total pitches with 6 hits against, 3 strike outs, 6 walks. McClellen 12 pitches with 1 walk.
“This tournament was very interesting and challenging for us. We had multiple girls missing games due to other sports that they compete in, but it did give some younger girls the chance to step up and show what they can do, and for the most part they did a good job. I had girls playing multiple positions throughout the tournament, and I am very proud of their willingness and positive attitude to play wherever the team needed them to play throughout the tournament. We will take every win and loss and learn from each game to get better,” commented Coach Gonzalez.
The Arabians will compete in the Jourdanton Softball Tournament starting on Thursday through Saturday, face Fredericksburg at home, and then play in the Seguin Tournament at Huber Ranch February 28th March 2nd.
By Dicy Chambers
Sports Writer