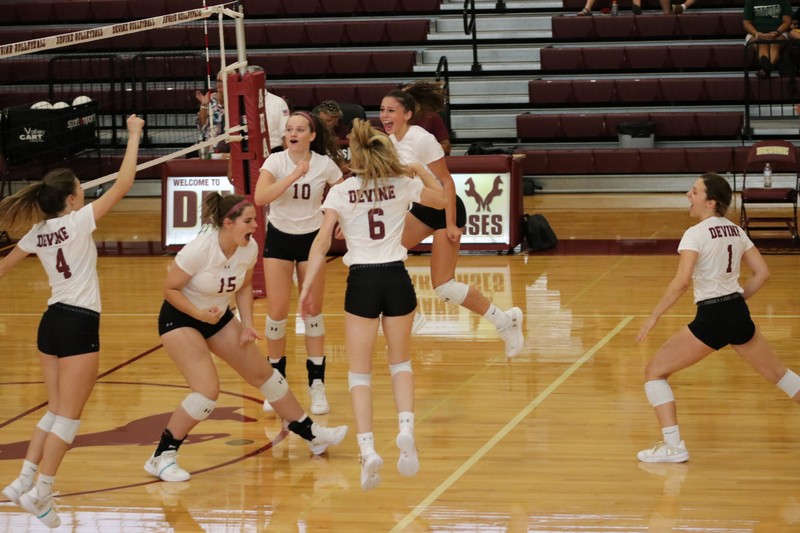 Wimberley proved to be a tough opponent for the Varsity Arabians last Tuesday. It was a quick 3 losses for the Arabians with match scores of 14-25, 13-25, and 21-25. “We were reading the ball well on defense and blocking, but we couldn’t make the play. We stepped it up in set 3 and made it a little bit harder on Wimberley to run in system plays. But we just made too many mistakes at the end of the match,” said Coach Leigh Anne McIver.
Alissa Stehle, Sara Moreno, and Macey Hein each had an ace. Sierra Pompa had 5 kills, Stehle 1, Megan Runyan 4 kills. Hein 10 assists and Gabby Rodriguez 1 assist. Pompa had 7 digs, Dana Aaron 3, Stehle 10, Moreno 7, Kaylee Howard 2, Rodriguez 9, Hein 7, and Runyan 2 digs.
Friday night was a much different story for the Arabians against Marion, coming out fired up, the Arabians played a strong aggressive game. Ending the first match quickly at 25-14, the intensity continued into the second match with 25-21 score. Stehle ended the game with a spike into a large hole in Marion’s defense.
Set 3 was a tough game for the Arabians with Marion capitalizing on mistakes. Devine lost 19-25 but fought back in the fourth for the win, 25-21. The Arabians were able to come from behind and win in a game that had great communication and a team that fought hard to not let the ball touch the ground.
“The girls were aggressive and put up big blocks. We started off the 4th set slow and dug ourselves a hole. We fought back to even it up but then got behind a few points. But the girls pulled together and got that fire back they had in set 1 and took control of set 3 to secure the victory,” stated Coach McIver.
Pompa and Moreno each had 4 aces, and Kaylee Howard and Rodriguez each had 2 aces. Hein had 34 assists. Pompa had 21 kills, Aaron 1, Stehle 7, Hein 1, Runyan 4, Madison Pike 4 kills. Pike 5 blocks and Pompa 1 block. Runyan 1 dig, Hein 7, Rodriguez 22, Howard 6, Moreno 12, Stehle 10, Aaron 1 and Pompa 17 digs.
By Dicy Chambers
Sports Writer