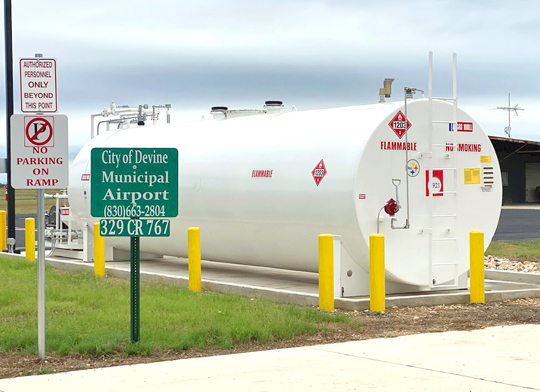 Sales of 100 low-lead fuel are set to begin soon at the Devine Municipal Airport after the City Council gave Airport Manager Vickie Pumphrey the green light to have the fuel farm recertified during the Regular meeting held on April 20.

Pumphrey said the 12,000 gallon fuel farm would be recertified as soon as she could get the quality control director with Titan Fuels, the City’s fuel provider, to send out an independent inspector.
Once the inspection is completed and approved, which Pumphrey pegged between $3,400 and $4,400, the City will be certified for six months or until all the fuel has been sold.
“So we have to have it recertified every six months if we don’t sell all the fuel that we have?” District 4 Councilwoman Kathy Lawler asked.
Pumphrey said that if the City purchases 6,000 gallons of gas, at least 3,500 gallons need to be sold to avoid having to go through the recertification process again.
“We’re starting with a half-load so it won’t be such a burden until we establish ourselves in the market,” Pumphrey said, “and then we’ll start increasing as demand increases.”
The Castroville and Pleasanton airports currently offer self-service 100 LL fuel for $4.10 a gallon, while the Hondo airport has self-service for $4.24 a gallon and full-service for $4.44 a gallon.
Devine plans to undercut those prices by selling self-service 100 LL fuel for $3.50 a gallon.
According to Pumphrey, once word of Devine’s fuel prices get out, it will spread quickly.
“Because [pilots] will fly to save a penny,” Pumphrey said.
Audience member Tom Scott addressed Council and said that if the City wants to sell fuel, it has to cut the price. Scott suggested that if the City pays $2.60 for a gallon of fuel and figures in 10 cents for expenses, the selling price should be anywhere from $2.75 to $3.00.
“If you make 20 cents a gallon, you’ll make a freaking killing on it,” Scott said. “And you’ll have eight to 10 planes stacked up at a time in order to buy fuel, and it won’t take you 60 to 90 days for word to get around.”
Scott emphasized thinking in terms of the volume of fuel sold.

“If it’s 10 cents a gallon less or a quarter a gallon less than everybody else, you’re not going to sell anything,” Scott said. “You’re going to be doing the same thing they’re selling, a few hundred gallons, maybe a thousand a month.
“If you drop the price, you’ll take a thousand a month from this [airport], a thousand from there, a thousand from there, and you’ll be having the truck driver here about every second to third day to top the tank off, and you’ll make money, and make more money from the gas than you do from the golf course.”
A motion from District 2 Councilman Steve Lopez and District 5 Councilwoman Debra Randall to move forward with the fuel farm recertification and amend the budget for its cost passed unanimously with support from Lawler, District 1 Councilman Rufino “Flipper” Vega, and District 3 Councilman David Espinosa.
The next Regular Council meeting is scheduled for Tuesday, May 18.
By Marly Davis
Staff Writer