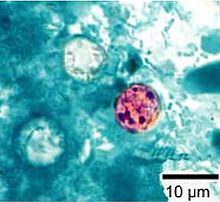 UPDATE – Sept. 17, 2018–DSHS and local health departments around the state are investigating an increase in the number of reported cases of the Cyclospora parasite beginning in early May. Long-lasting illnesses caused by the parasite, with symptoms like watery diarrhea, loss of appetite and fatigue, have been seen in various parts of the state and have prompted public health experts to advise health care providers and the public to be aware of the symptoms and pursue testing when needed.

Past outbreaks have been associated with imported fresh produce, and disease investigators are busy gathering information about the current illnesses as they attempt to determine whether there is a common source for the current outbreak. DSHS will update the 2018 count of Cyclospora cases here on Mondays during the outbreak.

More information is available in the DSHS news release:

State health officials are investigating 56 cases of illness due to the parasite Cyclospora since the beginning of May. DSHS is working with local health departments around the state and health departments in other states seeing an outbreak to gather information about the cases and determine whether there is a common source for the infections.

Cyclosporiasis is an intestinal illness caused by consuming food or water contaminated with the microscopic Cyclospora parasite. The main symptom is watery diarrhea lasting a few days to a few months. Additional symptoms may include loss of appetite, fatigue, weight loss, abdominal cramps, bloating, increased gas, nausea, vomiting and a low fever. Symptoms may come and go multiple times over a period of weeks or months.

People with symptoms that could be related to Cyclospora should contact their health care provider for treatment. A recent health advisory asks providers to test patients who have diarrhea lasting more than a few days or diarrhea accompanied by severe loss of appetite or fatigue. Health care providers should promptly report cases so that public health can investigate them and attempt to determine the source in order to head off future cases.

Past outbreaks in the U.S. have been associated with consumption of imported fresh produce, including fresh pre-packaged salad mix, raspberries, basil, snow peas, and mesclun greens. Texas has had multiple outbreaks linked to cilantro.

DSHS recommends thoroughly washing all fresh produce, but that may not entirely eliminate the risk because Cyclospora can be very difficult to wash off. Cooking will kill the parasite. Infection is generally not transmitted directly from person-to-person. There were 319 cases of cyclosporiasis in Texas reported last year.