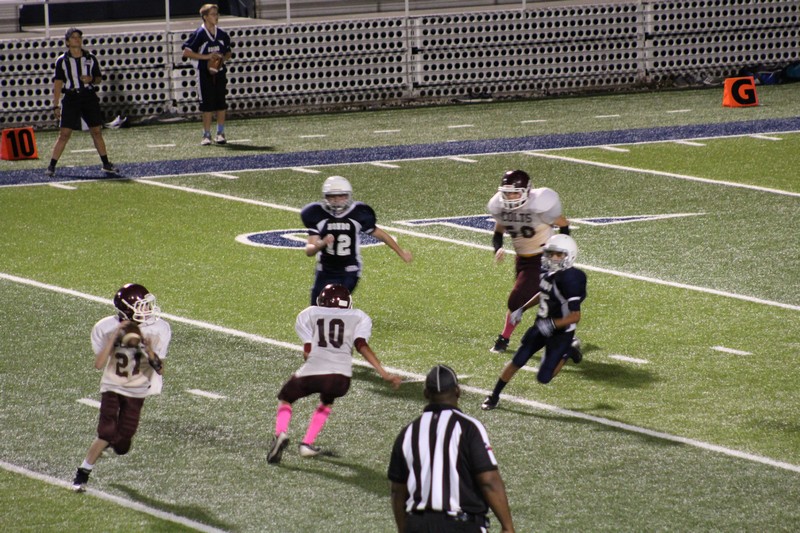 Click here for more photos of the 8th grade Colts vs Hondo!

It was an impressive junior high football game last Thursday night between the 8th Grade Gold Colts and Hondo Owls. Both teams played their best games of the year but Hondo unfortunately came out on top in the 22-30 game. Gabriel Lopez found the end zone three times with a 65, a 50, and a 45 yard drives. Quarterback Caden Hanson was able to get the ball to Johnathon Gelinas and Jack Schneider for two separate 2-point conversions.
“Hanson had an awesome game passing. He found Noah Macias in the last seconds of the game to get us down to the 7 yard line. The next pass was incomplete in the back of the end zone. I don’t want to say we lost, we just ran out of time!” – Coach Lon Cozby
Maroon Colts
In the final game of the night, the 8th Grade Maroon Colts beat the Owls 30-22. The Colts controlled the field much of the game but the determined Owls were able to break though and score a couple of times.
Opening kickoff was an on-sides kick by Aaron Saenz and recovered by Marcus Rodriguez that put the fire back under the Colts. A few plays later, Quarterback Jaiden Burford found a wide open Aiden Zapata for a 20 yard touchdown. Rodriguez was able to complete the 2-point conversion.
“Burford ran a read play that he kept the ball, fooling everyone in the stadium and jogged in from 23 yards out. It was a great fake that confused everyone. Rodriguez again added the 2-points,” reported Coach Lon Cozby.
Aiden Zapata made an incredible play after he punted the ball away, it was fumbled by the Owls, and Zapata recovered his own punt! Rodriguez and Zapata would keep moving the ball down field with Burford until Rodriguez would run it in from the three yard line. Saenz was open in the corner to make the 2-point conversion catch.
With the score now 22-14, Rodriguez found a hole in the Owls’ defense and ran in a touchdown from 59 yards out. Out-maneuvering every Owl that tried to catch him. He also added the 2 point conversion.
“We were going to run out the clock but Rodriguez ended up scoring on the 1st play! Tracen Rice had great coverage, he even got a hand on the ball. Jathan Razo fielded the onside kick and we were able to run victory and run out the clock.” – Coach Cozby
The final score was 30-22 in favor of the Colts. Up next for the Colts is a home game against Crystal City tomorrow night!
By Dicy Chambers
Sports Writer