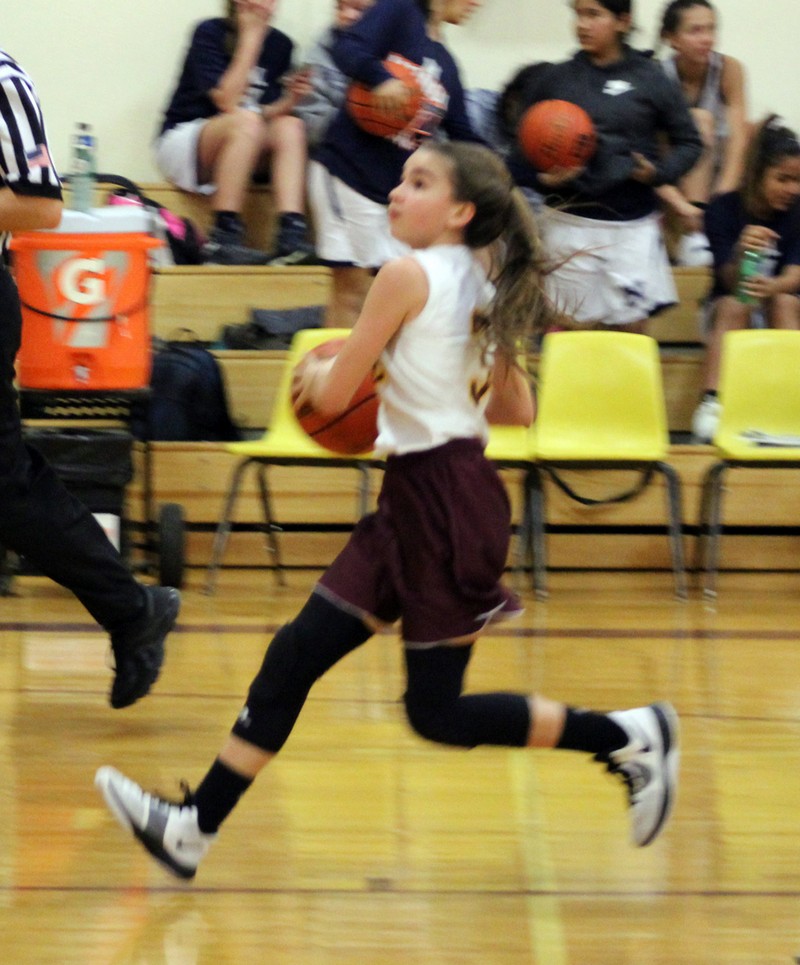 Gold FIllys
In their last game before the holiday break, the 7th Grade Gold Fillys beat Poteet 26-11. It was a great win to end the first half of the season with every player getting onto the court for a fun game. They controlled the game from tip off with a first quarter score of 12-3. The second half was a little slower but they still outscored Poteet 4-2 to end the half 16-5. They came out strong again in the second half and ended the third 24-7 and fourth 26-11.
“It’s really great to see how much these girls have improved since the beginning of the season. They are starting to show some “chemistry” out there on the court. These girls still struggle somewhat with remembering all of the plays but they are smart enough to figure it out. They played hard and supported each other on and off the bench. I could not ask for anything more. Great job girls!” said Coach Shana Beaty.
Yaretzi Mercado scored 8 points, Liah Romero 6, Janelle Coronado 4, Austin Little 4, Iris Stricker 2, and Jazlynn Briseno 2. Romero had 11 steals, Kiara Yrachta 4, Stricker 3, Emiley Mares 3, Alanna Monreal 3, Camryn Darby 1, Maya Hernandez 1, Mercado 1, Skyla Sockwell 1, and Little 1. Mercado and Little each had 1 assist. Romero had 5 rebounds,
The Fillys will play again on January 10th in Crystal City. They are currently 4-2 in district.
Maroon Fillys
It was a blow out game on December 17th when the Maroon Fillys beat the Lady Aggies 52-10. In their 4th district win of the season, the Fillys opened the game strong and finished stronger. They were able to slow down when they needed to and run their offense for the points. Leading 17-4 at the end of the first, Poteet never had a chance to catch up. The Fillys ended the half 30-7. Coach Shana Beaty’s team continued to play hard in the second half and only allowed Poteet to score three points in the third quarter. The Fillys had a great last game before their winter break.
“I was very pleased with these girls tonight.  They are so coachable!  They do a great job when I ask them to slow down and make a strong effort to run the offense. Every player made a positive contribution to our win tonight; and I couldn’t be more proud of them,” said Coach Beaty.
Makayla Rivera scored 12 points, Kelsey Dishman 10, Denise Contreras 9, Lizbeth De Los Santos 8, Avery Mobley 5, Zoe Ortiz 4, and Pamela Cardona 4. Contreras had 2 steals, Rivera 2, Dishman 1, Cardona 1, Ortiz 1, De Los Santos 1. Dishman earned 3 assists and Contreras earned 2. De Los Santos, Dishman, and Contreras each had 5 rebounds, Rivera 4, Mackayla Schnautz 4, Ortiz 3, Cardona 2, and Mobley 2. Cardona had a blocked shot.
The Maroon Fillys are now 4-1 in district and will face Crystal City on January 10th.