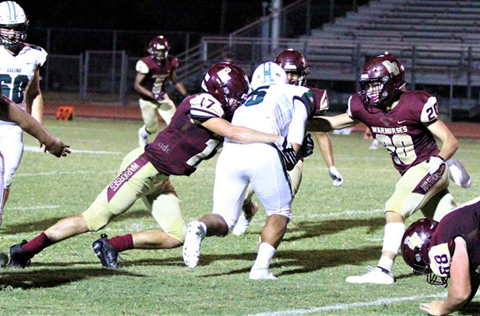 Devine begins its annual quest for a district championship on October 8 against an undefeated Carrizo Springs team. While other teams such as Crystal City and Pearsall have yet to find the win column, Carrizo and Bandera along with an always tough Hondo are putting their names in the hat for a state playoff #1 seed out of District 15-4A DII.
The Wildcats have outscored five opponents by a combined 192-24. Most impressive is the four shutouts Carrizo Springs put together in their first four victories.
Carrizo beat Uvalde 30-0, defeated St. Anthony 47-0, lit up Manor Tech 54-0, and stopped Cotulla 21-0 before giving up their first touchdowns of the year in their 40-24 win over Zapata in Week 5.
Expect the atmosphere in Carrizo Springs to be wild. Warhorse Nation needs to travel in droves to not only show their support but to help drown out some of the noise coming from the opposite side of the stadium.

Gomez’s take
Devine Head Coach Paul Gomez shared his thoughts on the Wildcats, and what his team needs to do in order to start district off on the right foot with a victory in what should be hostile territory.
“We start district play with a very good and much improved Carrizo Springs team. They are coming into district undefeated with a 5-0 record and a very impressive win over a good Zapata team. These guys have been blowing everyone out with tough hardnosed play and big play speed. Coach Gonzalez and his staff have done a great job getting the Wildcats to play at a very high level. We found out last year that there is a lot of talent over there so it’s going to be a great game to be a part of. Like I told our boys, I’m going to be disappointed if Carrizo is hungrier than we are. We didn’t get a gold ball last year and felt like we deserved one. We worked extremely hard all spring and summer to get stronger and faster. We worked on offensive and defensive skills all summer so that we can prepare our minds and bodies for the opportunity to win a Gold Ball. Well it starts next week and so now we have to get in the right frame of mind. I’m excited to get better this week. I’m excited to see our hard work pay off.”
By Jerel Beaty
Staff Writer