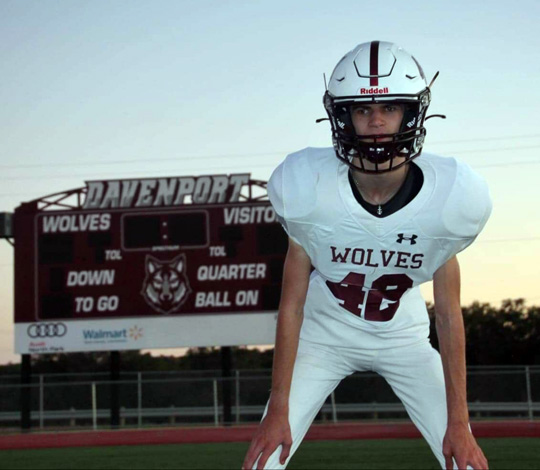 October 16th, 2020 was just like most Friday nights at high schools across the state of Texas, with teams playing football games; except it wasn’t just another Friday night football game at the new Davenport High School in New Braunfels. This night was Special.
In fact, this whole school year has been special for the Davenport Wolves and Coach J.D. Zimmerhanzel. This brand-new high school just opened, without any seniors, so their first football team consists of a handful of juniors, but mostly sophomores and freshmen. Coach Z and his staff are not only building a team from scratch but are taking this opportunity to start new traditions and create an inclusive culture for all of the students, which includes a Special freshman player, #42 Gage Dunivan.
Gage, like many freshmen boys, loves sports and especially loves football! His Mom says he “lives & breathes” football and can’t wait to practice each day with his fellow teammates. This may not seem very special but playing the game of football and having Cerebral Palsy is pretty Special.
And what makes this even more incredibly Special, is that at the age of 1 Gage’s parents were told that he would likely never walk, talk, or have a “normal” life. But his parents saw much more in their young son and were determined to give him all the opportunities available to him. So they began extensive physical therapy sessions, up to 36 hours a week for several years! As hard as they worked, they probably never imagined that at the age of 15 Gage would be on a high school football team, much less running a play called the “Gage Special”!
The Davenport Wolves had been practicing this special play for weeks, and the opportunity arose for Coach Z to call Gage’s number on October 16th during their first ever Homecoming game. They were playing against Austin Liberal Arts & Science Academy, whose coaches and players had agreed to be ready for that play. But I don’t think anyone realized how Special that play would be, not just for one player, but for everyone in the stadium!

When the “Gage Special” was called, the quarterback handed off the ball to #42 Gage Dunivan, who sprinted 46 yards for a touchdown! Sprinted!! Videos of the play showed the frenzied atmosphere of the players on the sidelines and of the fans in the stands! They were all screaming and cheering on this young freshman boy, this dedicated special-needs player with Cerebral Palsy, as he ran 46 yards!! The players mobbed the end-zone and lifted #42 in the air!
The fans in the stands were still screaming and shedding a few tears of joy for not only this young man, but for all the other Special players and coaches on the field. As Gage’s mom said, “In that moment, I am looking around and what I feel and what I see is not a child with special-needs that just made a touchdown- I see a complete team and stadium full of unity!” His mom gives all the credit to the special friends & teammates, and their parents, and coaches who are raising and guiding such Special young people who care about each other, help each other, and support each other each day.
And especially in these crazy pandemic days, we need more times like Oct. 28th, when people come together to make some thing or some time just a little more Special.
*What makes this even more Special is that Gage has a Devine Connection! He is the son of former Devine HS ’95 grad & her husband, Devin (Ehlinger) & Ryan Dunivan and brother of Skyler, McKenzie, & Hannah Dunivan, all of New Braunfels; the grandson of Russell & Myra Ehlinger, great-grandson of June & the late Arthur Ehlinger, and great-nephew of Stanley & Rhonda Ehlinger and Nancy & Gary Saathoff, all of Devine. *Poppie Russell & Uncle Gary Saathoff were both at the game to witness the “Gage Special”!
There is also another connection: Gage’s favorite college football player is his cousin Sam Ehlinger, who is the quarterback of the Texas Longhorns. Sam’s grandfather, Herb Ehlinger, & Gage’s great-grandfather, Arthur Ehlinger, were brothers & raised in Devine! Even though Gage has not yet met Sam, he follows him closely at UT, and says he likes to “run fast like Sam”! Now that is one Special young man!
*Gage’s touchdown story was told and shown on local KENS5 & other San Antonio news stations, on websites for the ESC Region 20, Comal ISD, & Oct. 21st Bulverde Spring Branch Area Chamber of Commerce, in articles of the Nov. 9th New Braunfels Herald-Zeitung & Oct. 30th Bulverde Spring Branch Back Porch News, on numerous Facebook sites, and even on a Twitter account for a Canadian International Journalist!
By Nancy Saathoff