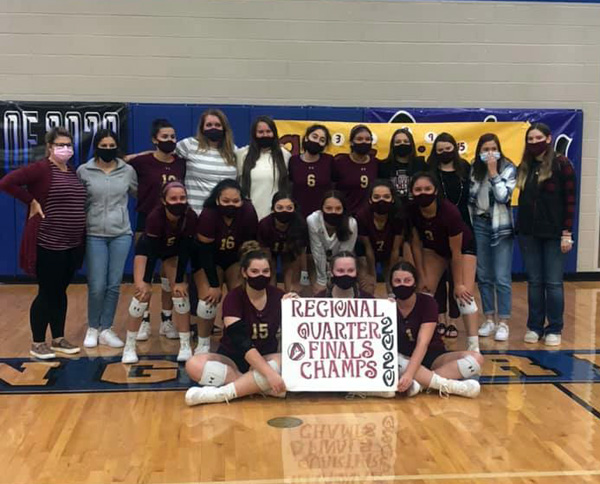 The Arabian volleyball team faced Needville in the Regional Semifinals Monday night. The Blue Jays traveled from just west of Houston to face the Arabians in Goliad. They were undefeated in district and showed up with a 32-0 record. Needville beat West Oso 3-0, Boerne 3-0, and Sinton 3-0 to get to the Regional Semifinals.
The Arabians fell in three sets but showed great leadership from their seniors,Allison Stevens, Megan Runyan, Darian Alvarez, and Madison Pike. They never got frustrated or upset by the score and played their hardest to deep up with the Blue Jays. Devine fought hard for every point but lost 25-12, 25-13, and 25-5. Needville moves on to face Wimberly or Tuloso-Midway. The Arabians have finished their season as the Regional Quarterfinal Champs and 21-1 overall.
In the Area playoff game against Robstown on November 3rd, the Arabians took them down 3-1. Robstown had beaten Hidalgo 3-2 to advance. Devine won the first set but stumbled it the second. Not letting the Cotton Pickers take control again, Devine won the third and froth sets to take the game. 25-17, 22-25, 25-18, and 25-18. “The girls did some great things tonight! It took us a while to get on a roll in the first set but we finally shook off the nerves and took control. We started off strong in the second set but then some calls got us out of our game and we just couldn’t finish out the set. In the third we came back strong and finished it out in the fourth. We did a great job on serve receive and everyone contributed on defense. Our offensive players really stepped up tonight and were real aggressive!” Coach McIver