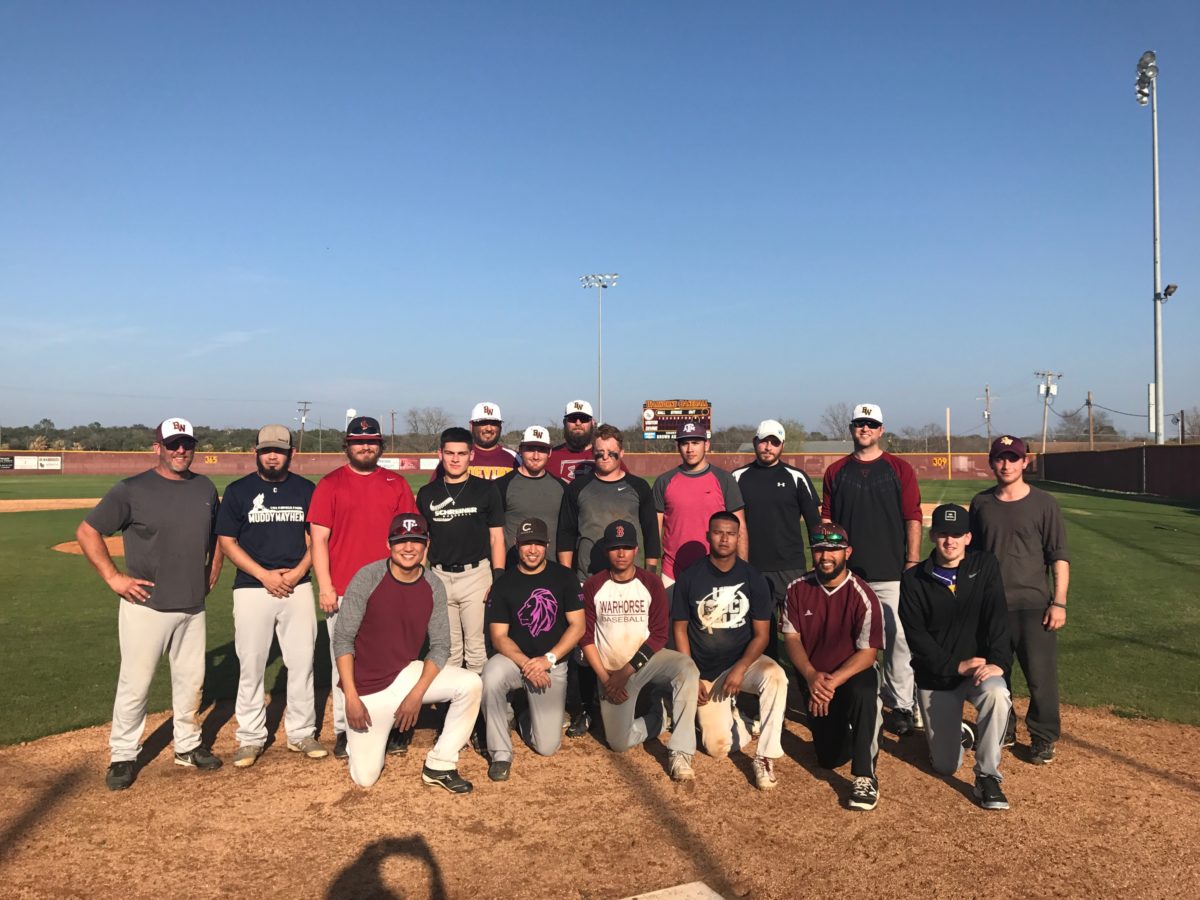 The 2017 Warhorses defeated the Alumni Warhorses 11-5 in what has become a Devine baseball tradition.
“This game is another opportunity for us to get better, but it is more for the alumni to come out and show us they still have some ability to play,” Head Coach George Villa said. “It’s a great time for us to catch up with our former players and for them to catch up with each other.”
The 2017 Warhorses pounced at their first opportunity, putting seven runs on the board in the bottom of the first inning. Dillon Ricord drew a walk to start things off, and advanced to third on a single by Newt Crouch. Jack Zimmerle walked to load the bases, and after a strikeout, Corben Boggs’ sacrifice fly to shortstop allowed Ricord to score and moved the other runners up a base.
An error on Isaac Solis’s shot to shortstop allowed Crouch to score and Zimmerle to move to third. Solis took second on the miscue, and after Matt Ornelas walked to load the bases again, Kyler Brown singled past second to drive in Zimmerle and Solis for a 4-0 lead. Ornelas scored on Ralph Rios’s single to right. Brown stole home for the final run of the inning.
The Alumni team added three runs in the top of the third inning and another in the top of the fourth to make things interesting, but the 2017 Horses responded with two momentum-breaking runs in the bottom of the fourth.
Crouch and Zimmerle put up back-to-back one-out singles, moved up a base on an error on a bunt by Richie Long, and scored after Solis put the ball in play and drew another error from the Alumi shortstop.
Neither squad scored again until the sixth inning, when the 2017 Horses once again gave up one run to the Alumni before scoring two of their own.
Long and Boggs both drew walks to begin the inning, and Long took third on a passed ball. Boggs stole second to put two runners in scoring position for Ricord, who grounded out to second to drive in Long and move Boggs up another base. Ornelas singled to center to knock in Boggs for an 11-5 lead in what was the final run of the game.
“There are still a lot of detailed areas that we have to clean up before our first game,” Villa said. “We are hoping to get them cleaned up in these next two scrimmages.”
Hits: Crouch 2, Ornelas 2, Boggs 1, Brown 1, Rios 1, Ricord 1, Zimmerle 1. Runs: Crouch 2, Zimmerle 2, Boggs 1, Brown 1, Long 1, Ornelas 1, Oropeza 1, Ricord 1, Solis 1. RBIs: Brown 2, Ricord 2, Boggs 1, Rios 1. Walks: Boggs 1, Crouch 1, Long 1, Ornelas 1, Ricord 1, Zimmerle 1. Stolen bases: Boggs 1, Brown 1, Long 1, Ricord 1, Rios 1.
The JV and Varsity Warhorses scrimmaged Pleasanton on Feb. 14, and host SA Kennedy for another scrimmage on Friday, Feb. 17.