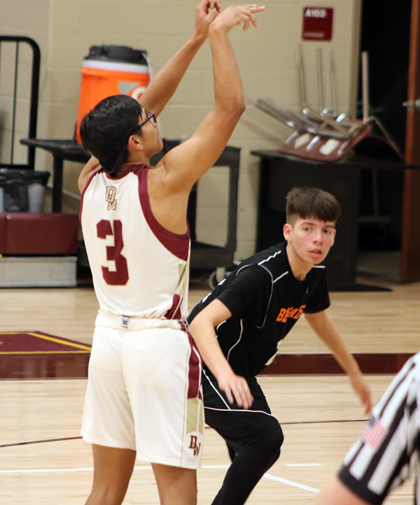 In their final game of the season, the Warhorses fell to Brooks Academy, 45-69. This was a tough rebuilding year that despite their record showed a lot of growth and development that will carry onto next season. Coach Evan Eads is proud of each and every member of the Warhorse basketball program and know next season is another chance to dominate.
Facing Brooks Academy on February 15th, the winner would move on to playoffs and the other team would end their season. Falling 45-69, Devine ended their season 6-24 overall and 1-7 in district to place 5th. “The boys played hard on defense. We struggled against the multiple pressures that Fox Tech applied to us. We adjusted after the first quarter and started to get good shots in the final three quarters. Unfortunately, we did not make enough shots to get the score close enough,” said Coach Eads.
Points: Jordan Roberts 11, Sage Cruz 1, Caden Hanson 14, Isaiah Morin 2, Eli Contreras 4, Chris Ortiz 3, Kaiveri Alverez 6, Peyton Carr 2. Q1 9-18, Q2 23-32, Q3 33-52, Q4 45-68. FTP 69%.
Coach Eads also added his final thoughts on the season, “The Warhorses had a difficult task ahead of them at the beginning of the season. They built a program the right way and the coaching staff is very appreciative of their efforts.
Xavier Contreras was selected as our captain and he did a fantastic job. He was our vocal and emotional leader. X led by example, he has played every position from 1-5 for the Warhorses. Many times during the year when we needed a stop or a bucket, X would just will it to happen.
Sage Cruz is a defensive animal. He was charged with guarding the opponent’s best offensive player and did an amazing job. Sage was a quiet leader, always available, always willing to do what needs to be done, played the game with passion and intensity He played the entire season with a nagging injury, but he refused to rest and not play.
Marcus Espinosa has made exponential growth from last year. He moved from being on the bench to earn a starting position and helped us beat Hondo at home this year. That game and most of the year Marcus was always calm and coachable. He would do anything for the team including diving on the floor for loose balls. We were devastated by his season-ending injury.
Peyton Carr does the dirty work daily. Peyton is a man of few words and fewer faults. All he did this year was work as hard as he could all the time. The example he set as a “Post” for our younger guys is much appreciated.
Isaiah Morin has been our energy guy. He brings effort, energy, and positivity to every practice and game. It didn’t matter if we asked him to come off the bench or start, he attack every job with his signature energy. He was our lifeblood on the bench.
Chris Ortiz is a determined young man. He was ready to step up for any challenge. With Covid and injuries, the team needed him to play guard sometimes and he stepped up even though he usually plays a post. Chris wanted to do anything he could to help the team be successful, even leading us in charges taken.
The underclassmen are ready to take the lessons learned this season to the off-season and improve, improve, improve.”
The Warhorses that will be back next year are will be ready to fight hard in their new district.
By Dicy Chambers
Sports Writer