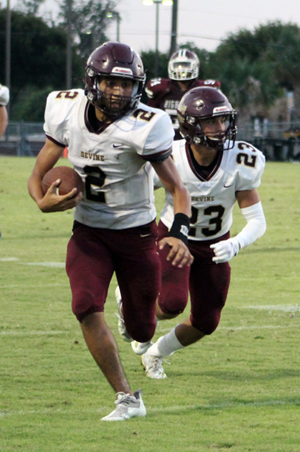 Warhorse Nation
Warhorse Nation, you did your job! It was a great site to see the stands packed once again with Warhorse Nations fans. Many may recall that capacity limits were set last season setting the stage for mostly empty stadiums wherever football games were played.
That is not the case this season as the Warhorse Stadium stands were filled with those supporting not only the Warhorse football team, but the marching band, flag core, cheerleaders, and, of course, Willie Warhorse.
The Horses have started their season with two straight dominating victories; let’s pack the stands once again Friday against YMLA!
Ball control
In their first two games, Devine has rushed 103 times for 740 yards averaging 7.18 yards per carry. Not a bad stat to start 2021.
A nice stat-line to accommodate those 103 carries is the Horses have turned the ball over once, committing their first fumble of the season Friday night.
Devine has punished its first two opponents up front, and the Warhorse running backs have found holes and seams that keeps the ball in Devine’s hands and keeps the chains moving.
First 100
Devine’s run-first, second, and third option offense has scored twelve rushing touchdowns in two ballgames and put 101 points on the scoreboard for a 50.5 average.
Brady Hackebeil, Gabriel Esquibel, and Ethan Santos have three touchdowns apiece via the running game while Xavier Contreras has two and Hayden DuBose one for a total of eleven through two games.
The Horses have 13 touchdowns in eight quarters with the other two being a Hackebeil to Peyton Carr 25-yard strike in the season opener and a Hackebeil 60-yard kickoff return to seal the deal last Friday against Memorial.
MLB package
No, this tidbit has nothing to do with major league baseball…
Middle linebacker coach Evan Eads likes what he sees from his hard-hitting band of defensive players. Pre-snap reads, post-snap reactions by the inside backers quickly determines the successes an opponent can have or cannot have.
Peyton Carr, Mason Martinez, Nick Ortiz, and Aaron Saenz man the middle for the Warhorse ‘D’, but fly around all over the field making tackles, covering inside pass routes, and plugging running holes.
Eads assessment of his players was thorough as he explained his top four’s performances.
“Peyton had four tackles and looked much more comfortable attacking reads than a week ago,” he said. “Mason Martinez had 1.5 sacks and continues to work on defeating blocks at the line of scrimmage. He is super aggressive on his blitzes, which really forces the quarterback into releasing his pass earlier than he probably wanted. Nick Ortiz had a sack and a forced fumble that cannot be overlooked in its importance to our defensive accomplishments. He definitely made the most improvement this week compared to last. We welcomed back Aaron Saenz after he sat out the opener. He played limited snaps as he is still recovering from an injury, but Aaron will be a part of the rotation.”
Memorial had forty yards rushing as their running game was shut down by Peyton, Mason, Nick, Aaron, and the rest of the Warhorse defense.
“Any of these four guys will give offenses big trouble if they continue to work and improve, which I believe they will” Eads said in closing.
What’s the rush?
Memorial’s measly 40 yards rushing on 25 attempts says a lot about Devine’s overall defensive tenacity against the run. Highlands gained 199 yards rushing in the previous ballgame, so shutting down Memorial who had what seemed to be comparable talent is a nice statement for Defensive Coordinator George Villa and the Warhorse defensive effort.
“It is obvious that we improved from last week in pretty much every stat category,” Villa said about his near defensive-shutdown of the Minutemen. “We gave up 23 points against Memorial opposed to 31 to Highlands, and even though we allowed 164 yards passing we only gave up 40 yards rushing. We got a turnover on an interception, and forced a fumble that we did not recover. So overall, very much improved!! Our kids did a very good job of learning from the previous game on why it is important to trust their keys and react to what they see. As a staff, we were very proud of our kids’ improvement. We are still making correctible mistakes that will get fixed with every rep our kids get in both practices and in games.”
Team stats
Total yards Dev 391, Mem 204 First downs Dev 20, Mem 10 Rushing Dev 48-352-7.33 Mem 25-40-1.6 Passing Dev 4-7-39-0TD-0INT Mem 12-23-164-2TD-1INT Punts Dev 2-50 Mem 6-209 Penalties Dev 10-61 Mem 4-25
Warhorse stats
Rushing Brady Hackebeil 12-109-9.1, Xavier Contreras 10-94-9.4-1TD, Ethan Santos 7-54-7.7-2TD, Nate Ramirez 4-24-6.0, Aiden Zapata 2-18-9.0, Gabriel Esquibel 5-17-3.4-2TD, Gus Puente 3-16-5.3, Marcus Rodriguez 2-11-5.5, Hayden DuBose 3-9-3.0. Passing Hackebeil 3-5-36-0TD-0INT, Samuel Guardiola 1-2-3-0TD-0INT Receiving Mason Martinez 1-22, Puente 1-11, Ramirez 1-3, Peyton Carr 1-3.
Score by quarter
MEM—0-7-0-16=23
DEV—14-14-0-16=44
Scoring summary
DEV—Ethan Santos 8-yard run (Caden Hanson PAT), 7-0, 9:11, 1st.
DEV—Gabriel Esquibel 9-yard run (Hanson PAT), 14-0, 2:56, 1st.
DEV—Santos 14-yard run (Hanson PAT), 21-0, 10:55, 2nd.
MEM—Rudy Aleman 61-yard pass from Elijah Cantu (Ariel Ramirez PAT), 21-7, 9:11, 2nd.
DEV—Esquibel 3-yard run (Hanson PAT), 28-7, 0:18, 2nd.
MEM—Safety, 28-9, 9:13, 3rd.
MEM—Alex Villarreal 32-yard run (PAT failed), 28-15, 8:42, 3rd.
DEV—Xavier Contreras 6-yard run (Peyton Carr from Brady Hackebeil 2-pt conv.), 36-15, 5:18, 4th.
MEM—Matthew Rubio 5-yard pass from Cantu (Rubio from Cantu 2-pt conv.), 36-23, 2:26, 4th.
DEV—Hackebeil 60-yard kickoff return (Esquibel 2-pt run), 44-23, 2:12, 4th.
By Jerel Beaty
Staff Writer