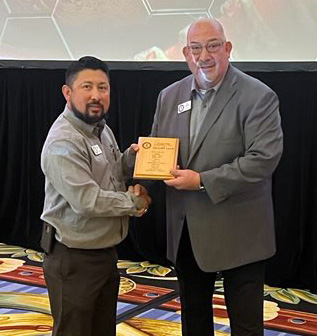 Devine Warhorse head baseball coach George Villa received his 200th career win plaque at the annual Texas High School Baseball Coaches Association conference in Grapevine last weekend. Villa is entering his 16th season at the helm of the program, boasting a 206-178-4 career record.
Villa accepted his plaque from 2022 THSBCA President Eric Forstier in front of nearly 1,800 coaches that were in attendance. High school baseball coaches across the state are awarded plaques for every 100th win in their career.
In his 15 completed seasons as head coach at Devine, Villa has made it to the state playoffs 11 times, with one of those non-qualifying seasons being 2019 when no playoffs were held due to COVID.
Villa has seven district championships, four bi-district championships, one regional quarterfinal championship, and one regional semifinal appearance.
Villa is well-respected inside the Texas coaching fraternity as he has been selected to serve various roles for different committees throughout his tenure, including a THSBA All-Star coach selection in 2016. In addition, he was on the THSBCA All-Star Selection Committee from 2016 to 2020 and is currently serving as Regional Director which he began in 2020.
For the San Antonio Association of Baseball Coaches, Villa served as its Small Schools Director from 2019-2020 and is currently in his first year as 2nd Vice President.

Congratulations Coach Villa on receiving your 200th career win plaque, and thank you for all you do in support of high school baseball throughout the state of Texas!
What is THSBCA?
The following is from the Texas High School Baseball Coaches Association website:
In 1972 an energetic group of high school coaches and scouts gathered in Waco to formulate new ideas for the promotion and improvement of high school baseball in Texas. That group founded what is now called the Texas High School Baseball Coaches Association. Over the past 49 years the association has grown in every division of baseball and is one of the fastest growing baseball associations in the country with over 3,700 members.
The THSBCA works hard to promote membership and further its members’ knowledge and awareness of baseball at all levels. The THSBCA staff handles concerns with current issues, rules changes, coach-umpire relations, recognition of players/coaches through award programs, and more.
By Jerel Beaty
Staff Writer