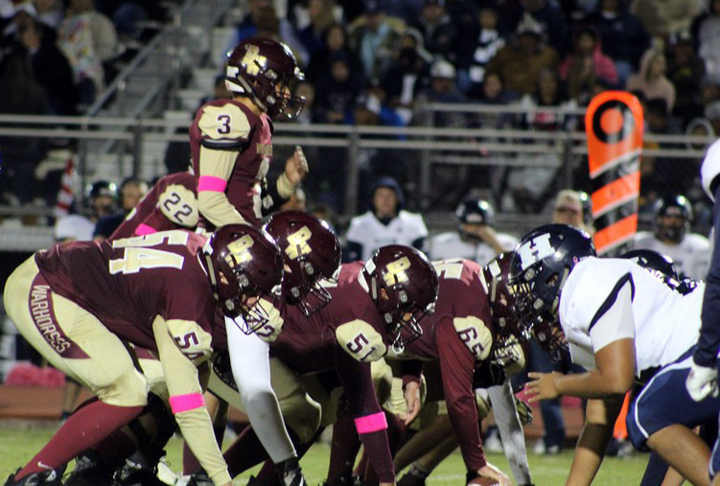 Well, folks, it has been a long time since I got to hand out any game balls. After the Horses season opening win against San Antonio Kennedy, I promised game balls to Warhorse players after victories. So, here ya go.
Game ball #1
People that look at stats from the Hondo game, Justin Contreras’ 273 yard, two-touchdown performance definitely jumps off the page. However, I am going a different direction with my first game ball nomination—excuse me, nominations…as in plural.
I know these guys could not share a single pizza and be happy with that, but them, as one unit will share game ball #1. That unit is the offensive line.
I mention these guys briefly in one of the other articles but 481 rushing yards doesn’t happen without great running lanes provided by the “phats” up front. Add in 42 yards passing and it’s a 523 yard night. O-line coach Devin Rotramel, a former Warhorse linemen himself and a 1-play middle school Colt fullback, had to be beaming with pride in witnessing what his men were doing up front Friday night.
In asking Rotramel on who he wanted to single out as having a great night, he stated “Man, you have to list them all. They all contributed.” Okay.
Kannon Ramirez, Jesus Hernandez, Tristin Kannard, Jayce Hackebeil, Kaylob Nira, Isaiah Rejino, Darrin Lafferty, Geoffrey Seal, John Schnautz, and Christian Robles—this first Game Ball is for you!
Game ball #2
Ok, Justin, game ball #2 goes to you. Two-hundred seventy-three rushing yards is a great feat by a running back under any circumstance. To gain 273 on only 19 rushes, score two touchdowns, and catch 3 passes all in a district-opening convincing win makes it that much more impressive.
To do it in the Battle of the Creek game against our neighbors 21-miles north on Hwy 173 is icing on the cake.
Knowing Justin and knowing he is a team-first player, there’s no doubt in my mind that he doesn’t mind getting the second game ball recognition after his offensive linemen.
Game ball #3
Even though Justin already gained his own personal game ball, he is also getting some additional press with the game ball #3 nominees. November 4, 2016 was the last time Warhorse running backs combined to rush for over 400 yards in a single ballgame. Almost three years (1,071 days) passed between that night and Friday night’s dominant performance.
Game ball #3 goes to Contreras, Leonard Pompa, Isaiah Oropeza, Brady Hackebeil, and Buddy Santos for not only combining for all those rushing yards but also for the manner in which they did it. Included as well is fellow offensive back Sergio Martinez who rushed zero times for zero yards but made crucial blocks to free several of those long runs.
If you were in Warhorse Stadium Friday, you witnessed some kids running the ball hard and punishing Owl defenders who were between them and where they were trying to go. Each of the Warhorse backs kept feet running after initial contact to gain even more yards and, more importantly, keep those first-down chains moving.
Game ball #4
Extra point kicking attempts have plagued the Warhorses even during some of their most glorious years. Jacob Featherly converting 6 of 6 Friday night kept Devine on scoring schedule without having to ever worry about going for two after any of their touchdowns.
By Jerel Beaty
Staff Writer