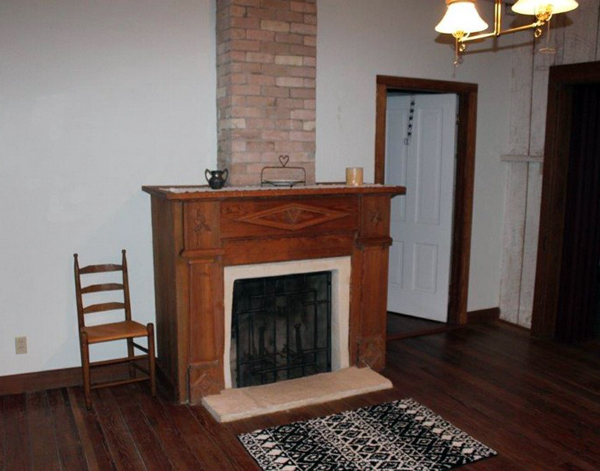 If you’re in the mood for a family vacation spot, here’s one that’s not too far away….In fact there are several vacation homes that can be rented right next door in Castroville. This home, The River House, is a beautiful, historic home, built along the Medina River.
The home was originally built sometime between 1844-47, right around the time that the community of Castroville was first established. The home is listed in the National Historic Registry, according to the owners.
“As you can see from the front facing pictures, the home has two front doors. The story goes that back in the day it was a two-family dwelling where each family could enter through separate doors,” the owner explains. “There is also a large fireplace that is accessible from both of the front rooms. The families share it for cooking and for warmth.”
The fireplace is not in operation today, but is a beautiful monument of the original house.
This piece of history was built in the mid 1800s when settlers were first coming to Medina County. The home was recently renovated with impeccable care.
“It has been beautifully restored keeping as much of the original look as possible,” the owner adds, “There are lots of wood accents and long leaf pine floors. We love it.”

The home has beautiful river access with a large grassy knoll on the banks of the river, shaded by large trees.
There is a queen bedroom downstairs, as well as a fold out couch bed. Upstairs you’ll find a sleeping loft full of historical character with two full size beds. There are two bathrooms, one with a tub and one with a stand up shower.
More history on “The Jean Ulrich Zuercher House”
One of the original Henri Castro colonists was a man named Jean Ulrich Zuercher, a farmer and baker, from Upper Alsace, France. According to the passenger list of the ship Heinrich, Zuercher, his wife, Dorothy, their daughter, Marie, and her daughter, Hortense, sailed from Amsterdam in November 1843.
As one of the first settlers, Zuercher received a “donation lot” from Castro in September 1844 and began immediately building a house on it. Zuercher was a man of some wealth who built his house of batten board with the help of the colonists’ communal labor. The house was completed sometime before March 26, 1847, because records show the house on the river lot and the 40-acre farm were sold then for $300.00. By the time of the sale, Zuercher had apparently died, his widow remarried and his daughter had married.

The original house consisted of two rooms with a half-story loft. The original kitchen was located outdoors near the 30-foot hand-dug, rock-lined well. A unique feature of the house is the back-to-back fireplaces with hand-carved mantels that still exist today. An indoor kitchen was eventually added across the back with stairs to the loft above the two main rooms replacing the outside stairs. The kitchen was built from rubble rock that was constructed with stucco. Deep-silled windows and the original cypress-shingled roof remain today.
In the 1940s the front porch was enlarged and enclosed to accommodate the family who owned the house at that time. Restoration began in 1993 by the present owners and continued for the next several years.
Owners are: Maurice and Lynn Tschirhart, Larry and Judy Tschirhart.They can be contacted at 210-415-5581.