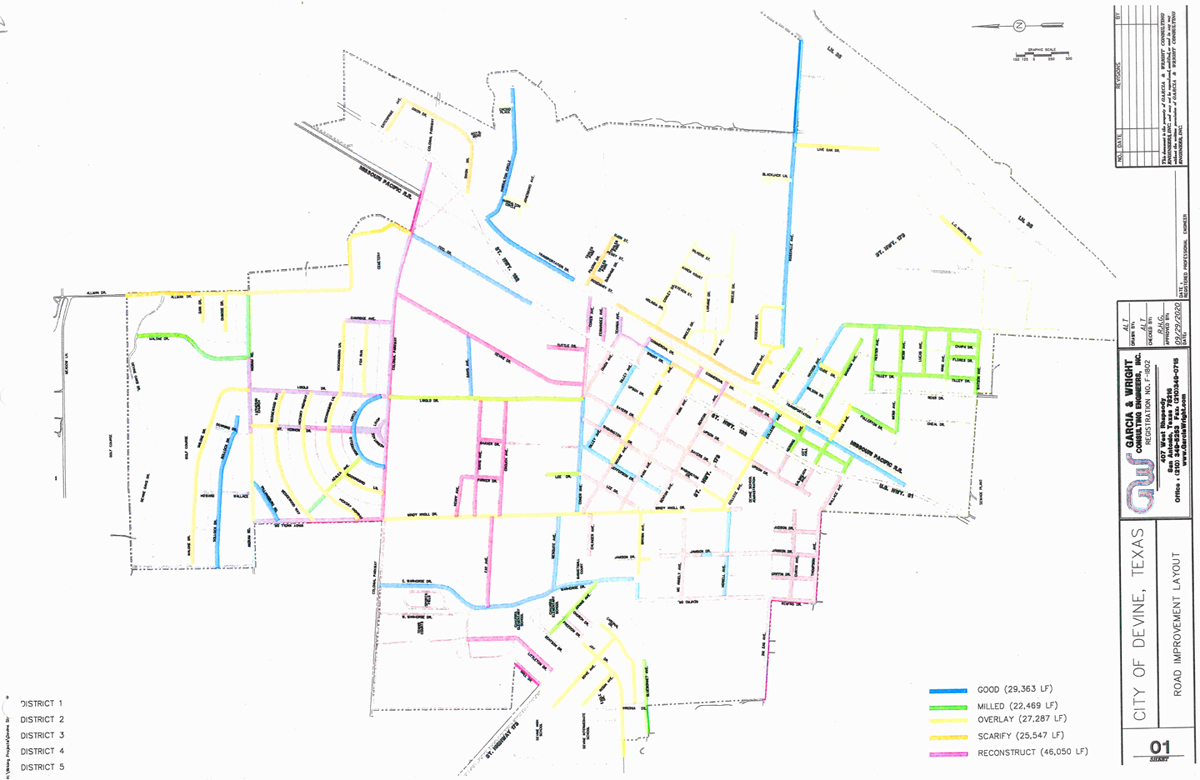 Road repair in Devine will get underway in the spring with the help Precinct 4 County Commissioner Jerry Beck and a Medina County work crew.
City Engineer Raul Garcia presented Council with a map rating the condition of most of the streets in Devine. 29,363 linear feet of roads, or approximately 5.16 miles, are in good condition and need no work, while an additional 22,469 lf. (4.26 mi.) have been milled.

“What that means is that the City has been applying a cold mix paving on those areas and so they appear to be in good shape at this time,” Garcia said. “We don’t know what’s underneath there, but at this time they look good.”
27,287 lf. (5.17 mi.) of streets need an overlay.
“Those are streets that have relatively good pavement at this time,” Garcia said, “but they need protection before they get any worse.”
25,547 lf. (4.83 mi) of roads need to be scarified.
“Scarify is where we feel the base looks in pretty good condition – and we need to verify that later on to be able to do some work on it – but the pavement is pretty well done,” Garcia said. “And what we do is scarify or remove the existing pavement, rework it, recompact it, and then put a new surface on it.”
46,050 lf. (7.6 mi.) of streets need to be completely reconstructed.
“The reconstruct is that really, they’re in pretty bad shape, and they do need to be reconstructed from scratch,” Garcia said.
Garcia estimated the cost of bidding out just the 22,287 lf./5.17 mi. of overlay work to a contractor would cost around $1,228,000. However, Beck offered to have a Medina County crew lay down a double seal coat on those streets for approximately $40,000 per mile, which is the cost of materials.
Garcia said Beck’s offer was a great deal, and that he preferred a double seal coat to overlay.
“Because when you shoot the asphalt, that asphalt gets in the cracks, it seals the cracks, and then you put in a layer of aggregate on it, and then you shoot more asphalt, then shoot another aggregate,” Garcia explained. “So then you have a real, real good surface to protect existing surfaces.”
Garcia said he didn’t recommend a double seal coat initially because the City has utilized it in the past only to receive backlash from residents who complained it wasn’t smooth enough.
Beck said that the only type of paving the County does is double layer seal coat.
“What we scarify and reclaim, we leave it there and pack it and put three inches of new base on top of that, and then we’ll seal it with a primer and then over it with a seal coat, which is the same stuff the State uses out here on the highway when they seal coat,” Beck said.
Beck said the County has projects that will take precedent over street work in both Devine and Natalia, but that it will get done.
“It’s not a problem,” Beck said. “We can do it. We’ve got the equipment and manpower, the guys know what they’re doing…they’ve been doing it for years. I’ve got some competent people who can do what you need.”

Hot lay asphalt doesn’t stick well in cold weather, which is why road repairs won’t start until spring. Beck suggested the City provide him with a list of roads to work on by Easter.
Thompson and Council noticed a few streets that Garcia missed and need to be evaluated, and Thompson told Council to double check the streets in their districts.
“Try to come up with a list of ones that you see or didn’t make it on this [map], or ones that you may disagree with,” Thompson said, “and go ahead and create that list so that when next time we talk about this, we actually have more to talk about.”
A motion by District 2 Councilman Steve Lopez and District 2 Councilman Rufino “Flipper” Vega to table the paving project for the time being passed unanimously with votes from District 4 Councilman Chuck Guzman and District 5 Councilwoman Debra Randall. District 3 Councilman David Espinosa was absent.
By Marly Davis
Staff Writer