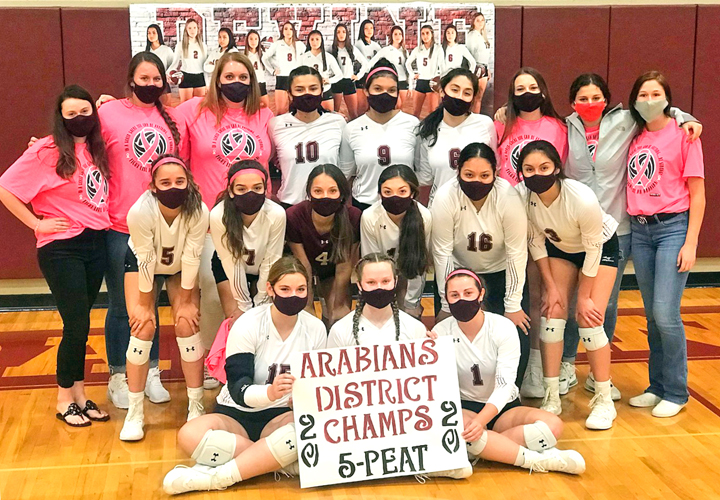 With the district season over, the Arabians have all of their attention turned to who they will face in playoffs. Their Bi-District opponent will be either Pearsall or Uvalde. The Bi-District game will be held between October 29 and October 31st according to UIL. The Arabians end their 2020 season 8-0 in district and 18-9 overall.

Last Tuesday, the Arabians faced Brooks Academy and won in three sets. Brooks had a late start to their season and were unprepared to face a team that has had a full season. Devine won 25-4, 25-13, and 25-0. “The girls did a good job for the majority of the night on keeping our focus and being aggressive. It took us a while in the second set to get a steady rhythm going, but we regained our focus and finished out the set. In the third set we had great serving and we were ready for the ball to come over and finish the point quick. We did a good job serving tough tonight and all our hitters were aggressive at the net.” Coach Leigh Anne McIver.
Kills: Megan Runyan 8, Rylee Esquibel 8, Bailey Oropeza 4, Aleyna Gerlach 2, Madison Pike 8. Aces: Allison Stevens 16, Runyan 5, Avery Cruz 3. Blocks: Esquibel 2, Pike 2. Digs: Stevens 2, Runyan 4, Esquibel 1, Kristina Moralez 1, Oropeza 1, Lacey Shook 2, Cruz 1. Assists: Stevens 17, Esquibel 8, Cruz 1.
Friday night against Fox Tech, the Arabians were delayed but that did not throw off their game. Fox Tech is another school that had a late start to their season, and Devine took advantage of the unprepared team and won in three sets at 25-7, 25-19, and 25-13. “A lot was thrown at the girls before the game started but I think they kept their focus and were determined to stay undefeated in district. They were ready for anything to come over and finish the points easily on the offense sides. I also think we had a really good serving night making it hard for Fox Tech to run their offense.” Coach McIver
Kills: Runyan 12, Esquibel 10, Oropeza 3, Gerlach 3, Pike 11. Aces: Stevens 4, Runyan 2, Moralez 2, Cruz 3. Digs: Stevens 3, Runyan 4, Esquibel 6, Moralez 12, Oropeza 2. Assists: Stevens 16, Esquibel 14, Moralez 1, Cruz 1.
By Dicy Chambers
Sports Writer