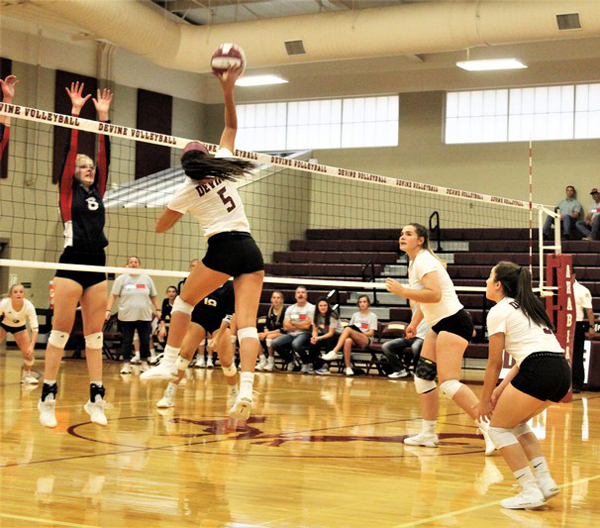 Tuesday, September 27th was another tough loss for the Varsity Arabians against Wimberley. “Even though we lost I don’t think we have anything to hang our heads down about. We played the best defense of the season tonight. The hitters were being aggressive even though they had such big blocks in front of them all night. I really feel that we took a giant leap forward from where we were. Now we just have to stay there and keep moving forward.” Coach Leigh Ann McIver
Devine lost 11-25, 12-25, 16-25. Kills: Bailey Oropeza 7, Gabby Rodriguez 1, Aleyna Gerlach 2, Janaee Wofford 3, Madison Pike 1, Jasmine Pompa 1. Aces: Macey Hein 2. Digs: Allison Stevens 8. Myla Miles 11, Oropeza 11, Rodrigues 8, Hein 11, Gerlach 1, Wofford 1, Pike 2.
Next Tuesday the Arabians will start a 6 game road trips including Poth, Floresville, Antonian, Fredericksburg, Cole, and their first district game against Carrizo Springs on September 27th.
By Dicy Chambers
Sports Writer