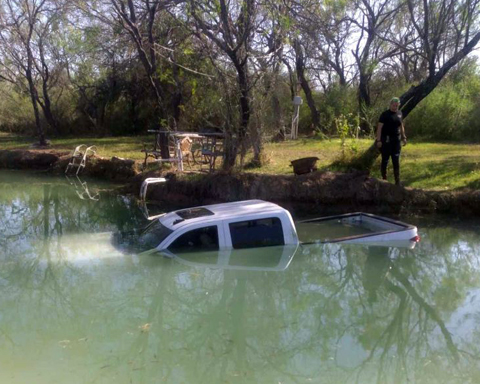 Several families living in the remote Moore area were awakened Thursday night to see several deputies flying through their family ranches along with two choppers circling overhead, searching for smugglers. Just a few hours later, another smuggler led authorities on a pursuit down FM 2200 and ended up with the stolen truck sunk in a fishing pond.
The pursuit that began Thursday night and went well into the early morning hours of Friday morning began all the way down on Hwy 57 in Zavala County before transferring to I-35 and coming into Frio County. Approximately 11 illegal immigrants were eventually captured in the pickup truck which fled all the way into Moore, where smugglers fled down a small county road that dead-ends into several family ranches. Desperate to get away, smugglers busted through at least 4-5 fences on different properties.

Ranchers in Moore were still fixing their fences, when we received word of another pursuit that had ripped through a family ranch on FM 2200 just a half mile or so down the road from Devine Middle School. This pursuit ended with the fleeing white pickup truck flying into the property owner’s fishing pond Friday afternoon. Unfortunately, the group of approximately eight illegal immigrants was able to scatter and get away in the Friday afternoon chase.
When we got a chance to catch up with two local sheriffs’, Medina County Sheriff Randy Brown reiterated what he’s been saying for months now, “This has become an everyday thing.”
Frio County Mike Morse was surveying some of the damages of the Moore pursuit as we spoke to him. He commented “We’ve assisted with at least five pursuits this past week.”