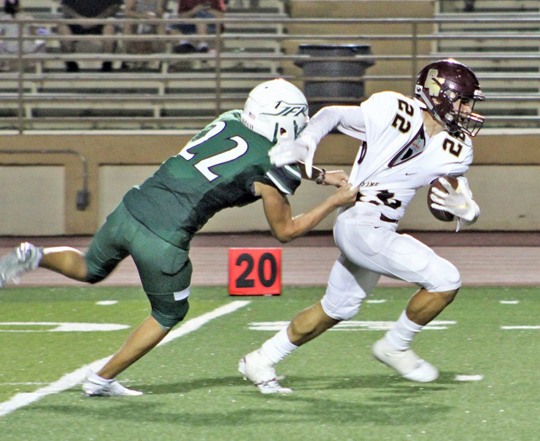 The Devine Warhorses opened up their 2019 campaign the same way they opened 2018 with a victory over the San Antonio Kennedy Rockets. This year, however, while the Horses offense put on a good showing by scoring 34 points, Devine’s defense held the Rockets out of the end zone entirely to finish with a shutout the first game out of the box.
“It was a good win for us on Friday night!” stated Head Coach Paul Gomez. “It’s a good way to start the season. Even though we made mistakes our effort was great and a lot of times it covered up the mistakes that we did make.”
Devine won the toss but elected to defer to the second half. The Warhorse defense, led by Sergio Martinez and Christian Gerlach stuffed the Rockets early and often, forcing a three-and-out on Kennedy’s first offensive possession.
Senior quarterback Isaiah Oropeza cashed in the Warhorses first touchdown of the season with 7:06 remaining in the first quarter, giving Devine a 6-0 lead they would never relinquish. Devine’s defense shut down the Rockets on their very next possession as well.
On Devine’s first snap, junior halfback Justin Contreras sprinted 71 yards to bump the lead to 14-0 after Oropeza’s two-point conversion run. The onslaught was on from there.
Devine’s defense put points on the board with a scoop and score by Martinez from 69 yards. That defensive touchdown was “Great!” according to Gomez. “It was great hustle by Gerlach to get to their quarterback after a high snap and a great job by Martinez to scoop the ball up and take it for the touchdown!
It was a very exciting play that changed the whole game because Kennedy had a good drive going and were threatening to score so it was a big play for us.”
The offense produced two additional touchdowns on the night that sandwiched a safety as Kennedy’s punter recovered a bad snap in the end zone with 3:49 in the third quarter. Leonard Pompa scored on a 4-yard run with 3:40 left in the second and Martinez scored on a 3-yard run with 2:30 left in the third quarter.
Gomez said, “Offensively, we executed pretty well with the offensive linemen and tight ends are doing a better job of communicating with our combo blocks. I still would like to improve running our feet after contact but we are getting to our assignment and occupying them so we were able to get some tough yards running the ball.
The big guys get their recognition in the Tidbit article in this edition as well but Gomez, once a ‘big guy’ himself, knows the recognition is not quite there for offensive line groups as it is with the so-called skill position players.
“You never hear their names called out,” stated Gomez, “but if there is a big game on a run or a big pass play that scores a touchdown, then these guys clear the path for us. We definitely need them to keep grinding and working to get better!
Offensive Coordinator Coach PJ Wells did a good job spreading the ball around to all our skill kids. Justin, Mason Burford, and Leonard all had important catches for us. We just have to keep improving and working hard; keep climbing that ladder.”
That next ladder comes in the form of the Somerset Bulldogs. Devine’s home opener is Friday night and all of Warhorse Nation is cordially invited. Kickoff is set for 7:30pm.
By Jerel Beaty
Staff Writer