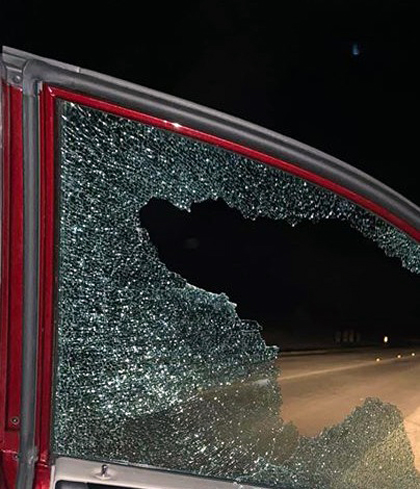 “It sounded like Hail…It sounded like popcorn…It sounds like getting shot with a shotgun.” Those are the remarks of local residents whose windows were busted or damaged from loose gravel after the seal coat construction was performed on Hwy 173 this Saturday. By Monday morning, county officials issued a warning to avoid Hwy 173 due to dangerous driving conditions. As we go to press Tuesday morning, the sheriff stated the road is in much better condition. However, stories and reports of damages from the past few days continue coming into the newsroom.
“I got hit all over my vehicle as I drove down 173 this morning, and the sheriff’s office has gotten at least 10 reports from vehicles damaged. It looks like the contractor should have timed out the construction better…..We have been in contact with TxDot and the contractor for TxDot. My suggestion for anyone who has had damage is to call the contractor for TxDot and file a claim.”
The phone number for the contractor given to us by TxDot is 1-800-460-6786.
As of Tuesday morning, the sheriff stated the road has been swept, and is now pretty safe to drive. Look for the number at the end of this article to file claims that have occurred in the past few days.

The Bowyer family is one of many families whose windows were shattered as they traveled down Hwy 173, as you can see in the pictures.
“A giant rock was kicked up by the passing car and shattered the driver window. It sounded like a gunshot. I had to break out the entire window before I could drive home. There were shards of glass everywhere,” Mrs. Angela Bowyer said. “We were in a rental so we had to pay our $500 insurance deductible to get the window fixed. We also had to drive all the way to SA and exchange our rental which put a delay on our trip.”
As this article was being written, more and more reports of windshield and window damages came in to the news office, not previously reported to the sheriff’s office.
Blanca Aguirre’s driver side window was shattered as well, “Saturday around 10:40 I was coming on 173 going south when a pickup truck from was driving in the opposite direction threw rocks at my truck, one of which hit my driver side window on my dump truck shattering the window…I was really scared didn’t know what to do. I couldn’t even stop, and there were rocks flying everywhere from oncoming traffic. I just told my daughter to cover herself with her jacket. I had to drive about 3 more miles after the window shattered. It was horrible.”
Lance Cote, of Biry, stated ” Every time I passed someone, I just turned my head away from the windshield and hoped something didn’t come through it. It was horrible. I guarantee there have been thousands of dollars of damages to people’s vehicles in these past three days, and someone needs to be accountable. I got 14 cracks and chips in my windshield and numerous paint chips down the side of my vehicle just within a 14 mile stretch. I called the contractor in SA at 210-661-6785 and got to talk to a receptionist. As of this morning (Tuesday) they sent me an email with a claim form attached, so I took pictures of my damages and mailed it in. We’ll see what happens.”
Susie Manning of Devine stated, “My daughter Bonnie and I both got several cracks from rocks on Hwy 173 this Saturday. Right now they are just pebble-sized, but I was told that anything larger than a quarter-size crack means you might have to replace the whole windshield, and that’s really costly. It sounded like popcorn every time we passed an oncoming vehicle. Those rocks should have been swept off.”
That pop corn sound is costing many residents hundreds of dollars a pop, especially for those who will have to replace a windshield. According to a local contractor windshield replacements can average $250 to $390 for the average common vehicles, but some can top out at $900 to a $1,000.
The Haby family is one that will have to replace a windshield after this fiasco, “Our truck windshield got a crack across it but thankfully didn’t shatter. It happened Sunday morning around 8:30. I haven’t filed a claim but I am going to try since our windshield will have to be replaced and I don’t feel like we should be responsible for the cost,” said Katie Kothman Haby.
Tommy Allen of Devine commented, “My wife works in Hondo. She was driving a brand new vehicle that we bought on Saturday. We counted 11 chips in the windshield and numerous chips in the hood. She said it was mainly from the traffic going the other direction. There was no getting away from the flying rocks. She called TxDot, and they said call Clark and make a claim. She called Clark, and they said submit pictures and claim by mail. We will see. But we are not going to let this go. The truck barely had 100 miles on it.”
Rocky Delgados share a similar story. “An 18 wheeler traveling southbound on 173 passed my wife on Hwy 173 and threw up all the loose gravel that was left on the roadway. The gravel cracked the windshield of her brand new truck. A few miles up the road another vehicle passing caused more gravel to hit her windshield which caused even more damage.”

Jordan Wofford commented, “I turned onto 173 right there by Biry on Monday morning and it sounded like hail…. looked at the my windshield and there were about 4-5 of those little star-shaped chips. I know the damage I had is not near as bad as some people, but they’re all over.”
The county courthouse warned residents….”WARNING!! TXDOT has overlaid rock on Hwy 173 between Hondo and Devine. The loose rock is causing a VERY large number of broken and/or damaged windshields. It is recommended that you use an alternate route, except for emergencies. TXDOT is aware of the issue.”
Medina Glass owner Jay Dishman commented, “We have repaired 9 vehicles this Monday. We suggest if you travel 173 to keep a good amount of distance 250 or 300 feet between vehicles in front of you, until TxDot gives update on road condition.”
TxDot’s media representative Laura Lopez was contacted, and sent the following response:
“Due to an 18-wheeler that locked his wheels this morning (Monday) on the seal coat work performed yesterday, it resulted in aggregate loss (loose gravel). Our contractor reacted immediately and has been addressing it since this morning (Monday).”
We pointed out that many of the accidents with the gravel or rocks occurred on Saturday, and TxDot responded, “TxDOT received concerns this morning (Monday) regarding issues this morning, nothing over the weekend.”
Laura Lopez said complaints should be directed to the local Hondo Office but claims need to be made with Clark Construction – 1-800-460-6786.