Some time during the 70s, on a trip back from Colorado, our family traveled through Post, Texas. Post. Who names a town Post? We found it so novel that once home, our son, Vance, gave the name of Post to a newly acquired dog. Over the years, I’ve often reflected on that West Texas town’s strange name. (I didn’t think to look at the Main Street sign!)
Fast forward to 2019. We’re watching the History Channel when a story comes on that reveals the origin of that town’s name. Am I the only one who didn’t know this or the town’s unique history? Well, assuming that I am not, and even if some of our readers also viewed that TV segment on the History Channel, (or noted the street sign), let me elaborate.
Post is located at the crossroads of U.S. Routes 84 and 380 in Garza County on the edge of the caprock escarpment of the Llano Estacado (Wikipedia), which is the southeastern edge of the Great Plains. John Bunyan Slaughter owned the U Lazy S Ranch there until selling it in 1906 to Charles William (C.W.) Post, who became the cereal manufacturing giant. So, why would this businessman from Illinois, who at his death had amassed one of the largest fortunes of the early 20th century, choose such a location for investment?
Post was an inventor, working first as a salesman and manufacturer of agricultural machinery. He is credited to having invented and patented several farm implements, including a plow, a harrow, and a hay-stacking machine. Then, as a result of stress from his work, in 1886, he moved to Texas.
At this time, Post began venturing into real estate on the outskirts of Fort Worth. He obtained 200 acres on the outskirts of Fort Worth, platting the land for streets and homes and constructing two mills. However, stress of this work brought on Post’s second breakdown in 1891.
After extensive traveling to discover health remedies, in 1895, Post founded Postum Cereal Co. (There’s a wealth of information about his cereal company.) He then returned to real estate investments, which brought him to West Texas. The purchase of the Slaughter ranch, along with other land amounting to 225,000 acres in both Garza and Lynn Counties, was made with the objective of creating a utopian community. He platted a new town, naming it Post City. He planted shade trees; laid out farm parcels; established a school, a gin, and a textile plant; built churches; built trim houses; established a bank; built the Algerita Hotel; constructed a department store; and established The Double U Company to manage it all. To create the lifestyle he desired alcoholic beverages and brothels were prohibited. 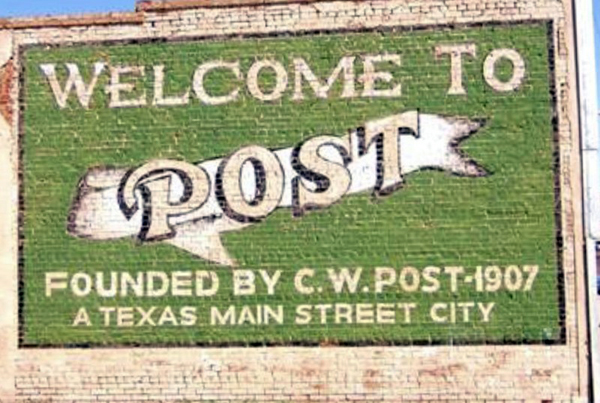 The Double U Company rented and sold farms and houses to settlers. Post City’s post office was founded in 1907. The Post City Post was the town’s newspaper – today going by the name of Post Dispatch, the Garza County paper. The railroad reached the town in 1910.
From 1910 to 1913, Post experimented in attempts at rainmaking by detonating explosives into the atmosphere at timed intervals. This was not successful.
Post City was incorporated in 1914, changing its name to Post. This, by the way, was the same year of C.W. Post’s death. By this time, Post, Texas, had a population of 1000, ten retail businesses, a dentist, a physician, a sanitarium, and several churches, including Baptist, Methodist, and Presbyterian.
Postex Cotton Mills began production in 1913 with 250 employees. By 1945, when the Post interests sold the business to Ely and Walker Dry Goods Company of St. Louis, the plant was producing six million yards of cloth a year and employed 375 workers who manufactured Postex cotton sheets and Garza Pillow cases. Burlington Industries purchased Postex in 1955 and employed 450 persons. The mill has since closed.
Interestingly, in 1916, the Post estate pledged $75,000, and the town raised $35,000 to bid unsuccessfully to become the site of the proposed West Texas Agricultural and Mechanical College.
The population of Post has fluctuated, with the development of local oil bringing it to its highest numbers of 4,800 in 1964. It sits at around 3,800 today, with ranching and farming continuing to be important to the economy. The former sanitarium in Post is preserved as the Garza County Historical Museum. And, the OS Ranch Museum, with hybrid exhibits from the American West and Asia, is a noted attraction.
Post’s notoriety includes its having been designated as a Texas Main Street City in 1987. Main Street is lined with gift and clothing stores in restored historic buildings. The Garza Theatre (1920-1957) on Main Street dates back to the age of the silent screen. It has been renovated and reopened for community events, and the town is the site of an interesting scene in a popular 2016 movie, Hell or High Water.
Post ISD has an enrollment of 869 (2017-2018). Its mascot is the antelope. That seems fitting; after all, it might have been the Toasties.