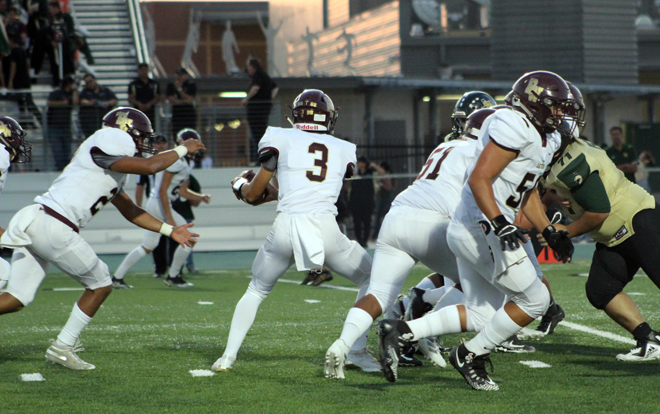 Pleasanton flies into town this week with a perfect 3-0 record on the still-young 2019 season. After a season opening 39-14 victory over San Antonio Edison, the Eagles beat San Antonio Lanier 49-33 week two. Last Friday, Pleasanton beat one of Devine’s 29-4A members 28-0. The Horses will have their hands full, but Head Coach Paul Gomez feels his squad is up for challenge #4.
“Their quarterback Nathan Acevedo (#8) has been improving every game and comes in playing his best football,” Gomez began saying. “Pleasanton has a big offensive threat with senior WR #80 Dalton Hobbs. He is a 6’4” receiver that is strong and fast. He has big play potential every time he touches the ball. He had a great game against us last year so we will have to have a plan for him. He is going to get his catches but we have to limit his runs after the catch because that is where he is dangerous.
They also have another good WR in junior #11 Alonzo Duran. He keeps the chains moving for that offense and does a good job of working the middle of the field. They lost a lot of offensive linemen to graduation last year but those big boys that they have now have improved every game that they have played.
Coach Liska and his staff have done a great job with this team. They will definitely be a tough matchup for us. They have sophomore running back Joel Arevalo (#4) that is very, very good. He was on varsity as a freshman last year and did some really good things for them. He is a strong and explosive back that is hard to bring down once he gets going. I have been really impressed with his game this year.
Defensively they have a new Defensive Coordinator in Danny Sanchez. He is the brother of former Warhorse Trainer Manny Sanchez who now runs his own clinic in Castroville. Danny knows football and he has that defense pointed in the right direction. They have a quick and aggressive defensive front. They run the 3-4 defense and sometimes get in the 6-2 in short yardage situations.
They have some good aggressive linebackers and definitely put pressure on their opponents with blitzes. Our offensive line will have to be focused in order to pick up their stunts, which come very frequently. They have good cover people and they try to give teams a good mixture of man-to-man and zone coverages.
Once again, the only thing that we can control is our effort and our focus this week. So, we will definitely put our heads down and go to work.”
Kickoff is set for 7:30pm.
By Jerel Beaty
Staff Writer