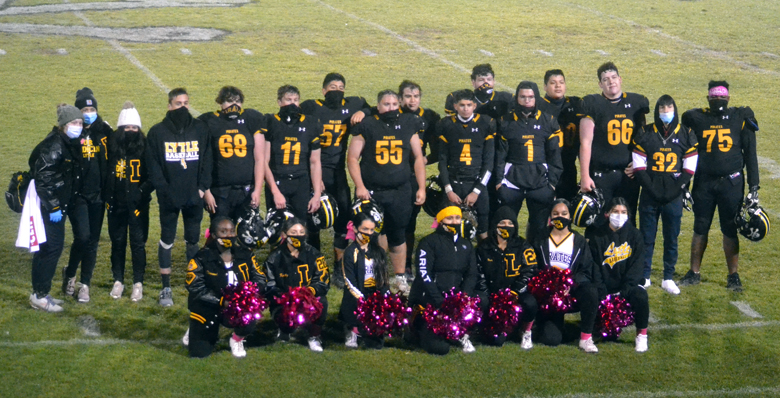 Lytle hosted the Jourdanton Indians Tuesday on a cold, misty night. The Indians wasted no time proving that they are the top team in district 14-3A D2, but both teams did some great things. The Pirates are now 5-5, 3-3 in district play. Two more games remaining for other teams in the district will determine if the Pirates make the playoffs.
In the first quarter, Jourdanton scored on a 13-yard pass at the 9:45 mark followed by a 33-yard TD pass at the 5:15 mark. The PAT on both touchdowns was good bringing the score to 14-0 in favor of the Indians. Late in the first quarter Jourdanton was driving deep in to Pirate territory when the Pirate defense stopped the drive on the 5-yard line. Jourdanton went for the score on fourth down, but a solid tackle by Kody Villarreal and Rylan Wagner stopped the drive ending the first quarter with the score still 14-0 Indians over the Pirates.
Jourdanton scored three times in the second quarter. First on a 9-yard TD pass, followed by an 8-yard PD pass and finally on a 23-yard TD pass. The PAT’s were good bringing the score at half-time to Jourdanton 35, Lytle 0.
The Lytle Pirate band was able to show the crowd their complete contest performance during half-time. Despite the rain and cold the band put on an excellent show as always.
Jourdanton scored at the 8:27 mark of the third quarter on a 33-yard TD pass. Once again, the PAT was successful bringing the score to 42-0.
Lytle’s offense started to move on gains by Justin DeLeon, Vincent Casanova, and Mark Cantu. Cantu would run for 27-yards; however, the drive was stalled forcing Lytle to punt. The Indian punt receiver muffed the ball and Pirate Albert Aguilar recovered the loose ball at the Indian 10-yard line. Mark Cantu wasted no time in getting the Pirates on the scoreboard with a 3-yard run followed by a 7-yard TD run. The PAT by Daniel Aguirre was good bringing the score to Indians 42, Pirates 7 with 4:28 remaining in the third quarter.

The Pirate celebration was short-lived as the Jourdanton kick-off returner ran the Pirate kick-off back for a 70-yard TD aided by a clear block in the back that was not called. The PAT was once again good bringing the score to 49-7.
Lytle responded with the best Pirate drive of the game. Runs by Vincent Casanova, Mark Cantu, Malakai Castro and Collin Aldridge led to a 14-yard TD run by Mark Cantu. The PAT was good brining the score to 49-14 with 10:09 remaining in the game.
Lytle got the second break of the game when Pirate Jonathon Cantu recovered an Indian fumble at the Pirate 23-yard line. Malakai Castro started the Pirate drive with and 18-yard run followed by a 23-yard run by Vincent Casanova.
Cantu ran for 25 yards, but the play was nullified by a holding penalty. Short runs by Casanova, Cantu, Castro led to a 2-yard touchdown run by Cantu as time ran out. The PAT by Aguirre was successful bringing the final score to Jourdanton 49, Lytle 21.
On offense Mark Cantu and Vincent Casanova were the leading ball carriers. Mark Cantu also led the passing attack with Collin Aldridge as the leading pass receiver.
Defensive highlights included a muffed punt by Albert Aguilar, and a fumble recovery by Jonathon Cantu. Logan Wilson and Zakry Placido each broke up two Indian passes, and Cort Haltom and Collin Aldridge each broke up one Indian pass. Leading tacklers were Rylan Wagner, Collin Aldridge, and Cort Haltom.
The Pirates finish the season with a 5-5 overall record with a 3-3 district record. This is the most wins since 2014. Thanks to everyone who made this a great season: the players, coaches, cheerleaders, the Pirate band, announcer Ricky DeLeon, and the many Pirate fans who attended every game.
After the game, Coach McConathy stated, “I would be remise if I didn’t use this email to talk about our seniors. Starting with the guy that we asked a lot of last night in Mark Cantu. Last night was his 30th varsity game…..but his first taking snaps as our quarterback in a game. We have been getting him snaps at practice since August 3rd as a just in case scenario. Last night was that scenario, fellow senior Carson Aldridge was out as he had a season ending injury last Thursday at Cole. To ask an 18 year old to step in and lead the offense in his last home game on two days of practice is a tough ask, he did a commendable job and we are all proud of his effort.”
“Our offensive line and defensive line is led by seniors. Roberson Harold, Kody Villarreal, Brenham Sevier, Jonathan Cantu, James Black, Diego Garcia-Hernandez they all have done a great job on both sides of the ball. Rylan Wagner over the course of the last three seasons he has accumulated over 300 tackles, and is the captain of the team. Rylan is like having a coach on the field getting our defense lined up. Our offensive skill players are Carson Aldridge, Logan Wilson, Vince Cassanova, and Quen Syma. This group battled injuries, extreme bumps and bruises, and still found a way to put points on the board. Last but certainly not least Santiago Garcia. Santi has been dealing with a leg injury since week 3, but continues to find a way to contribute every game.”
“These 13 young men have been a pleasure to coach over the past 6 years since they started in junior high football. We will miss them dearly.”
“A small miracle in and of itself, we played 10 games this year. We played 10 games in crazy 2020, not every team can say that. I’m proud our guys. Thank you to everyone that made this possible, Administration, Transportation, Custodial, Cafeteria, and the Coaching staff,” McConathy adds.
By Bill Herring