It is said, “Marine Corps recruit training is the most difficult recruit training in the Nation and a tough undertaking for all who accept the challenge to become a United States Marine.” (M. J. Palma, Colonel, U.S. Marine Corps)
Graduation as a Marine is preceded by his laboring intensively for thirteen weeks, beginning at the Marine Corps Recruit Depot. Ten weeks of recruit training is followed by an excruciating 54-hour endurance challenge called the Crucible at Camp Pendleton. During this rigorous training, the recruits’ “minds, body, and spirit are challenged in a series of eight events revolving around obstacles, warrior stations, movement courses, and reaction problems tackled over a grueling 40-mile course.” Sleep and food deprivation add to the rigor of the course, (only three MREs [meat, ready-to-eat] and 4 hours of sleep are provided), designed primarily to develop teamwork and camaraderie through shared hardship.
The last challenge in the Crucible is mastering a “hill” called The Reaper. This legendary trek is comprised of a 9.7-mile hike that includes a 700-foot tall mountain. It is the final test in the Crucible, and finishing the reaper is a major accomplishment. One seasoned Marine stated that on reflection he actually did not think he would be able to do it.
Upon cresting the Reaper and reaching the final descent, the recruits line up before their drill instructors and are finally praised for their accomplishments. One fellow said, “It was strange to hear our drill instructors praise us on our performance during the hike.” With most of these recruits’ faces streaked with tears, the men finally receive the coveted Eagle, Globe and Anchor and are, for the first time, proclaimed “Marines”. “It is the ‘right of passage’ and is an experience a Marine never forgets. With that memory and the core values learned in recruit training, they will be able to face any challenges in their path.” (MarineParents.com) 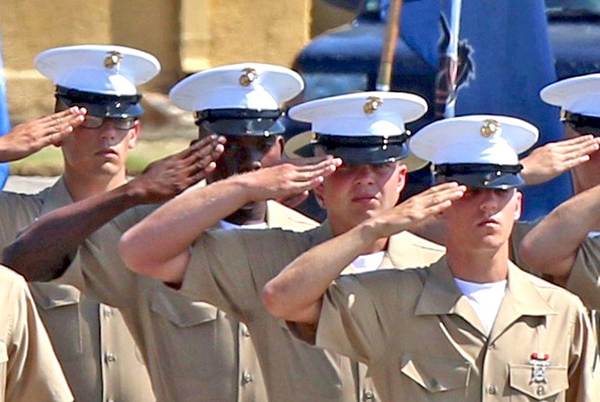 Following the Crucible, the new Marines spend another two weeks back at MCRD San Diego. (All men trainees west of the Mississippi train in San Diego; all men and all women Marine trainees east of the Mississippi train at Paris Island, SC.) They will continue training, but now as Marines rather than as recruits. Graduation occurs in week 13, followed by a 10-day leave. After this time, the new Marines report into the School of Infantry (SoI). During that two-month phase, the new Marines are prepared with the technical expertise they need to excel in their Military Occupational Specialties (MOS). The SoI occurs at Camp Pendleton, San Diego; the MOS takes place at Quantico, Virginia. It is said that these training phases are even tougher than the ones experienced during basics!
The graduation events occur every other week at MCRD, and they begin on a Thursday with Family Day. It is at this time that the family members are given their first opportunity to see their loved one, now a Marine. The first order of activity is where, in this case, all 251 graduates, comprised of six platoons, make a final motivational run. Then they disappear.
Next, a program is presented in the theater. An hour or so later, eager family members once again congregate to glimpse their new Marine in uniform for the first time. That is very emotional. Each platoon marches in, and family and friends frantically search to spot their Marine – not an easy task because they are all so drastically changed. Devine resident Patti Richard said about her recently graduated Marine son Sam, “He was emaciated!” Yes. One has to concur. A former high school and college football player no longer looks like a linebacker! But, the officers affirm that these men are in the best physical shape of their entire lives.
After teary and warm embraces, yet somewhat restrained on the Marine’s part, the reunited families gather for a well-orchestrated lunch at the Bay View Restaurant on the base. The Marines can spend the afternoon at liberty until reporting back at 5:00 – but always at least 10 minutes early – and in military language that’s 16:50! Graduation will take place the next day, Friday.
Friday morning begins with Presentation of the Colors at 7:30am (07:30). That is an inspiring, patriotic program including the Marine Corps Band in full glory. Then, families move to the stands that face the sacred Parade Ground, an area onto which visitors are admonished not to cross or walk. Only men in uniform can walk on that Parade Ground. (Keep in mind that with 251 graduates, there were a lot of family members. In our group alone, there were twelve in attendance, including a group of Heath’s high school friends who flew out to witness this event.)
The long wait is finally rewarded by the beginning of the ceremony, including “Attention”, “Adjutant’s Call”, and the “National Anthem” played by the Marine Band. Then, one can hear the entrance of the platoons. The second group, Delta Company Platoon 1062, is the one we’re watching. Each of the six platoons marched at slow cadence down the Parade Ground, in front of the stands – with each platoon standing before the spot designated for their family members. After further pomp and ceremony, the platoons marched back down the ground before returning for the final presentation and review. To send further chills down the spine, the Marine Band played “Anchors Aweigh” and “The Marines’ Hymn”. 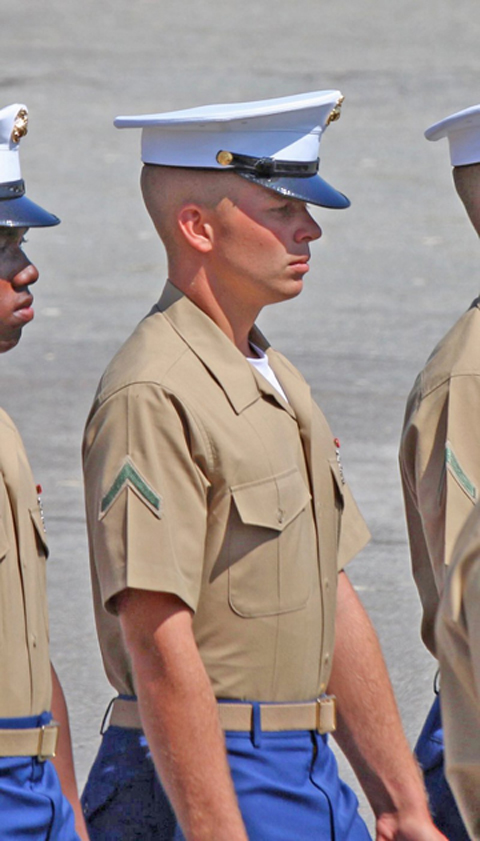 With binoculars and a powerful camera, we spotted our Marine. Upon close inspection, his Expert Marksman medal is seen on his uniform, dress blue delta and white cover. It brought a lump to my throat the first time I saw Heath salute. Wow. Our young man is a Marine! God speed.