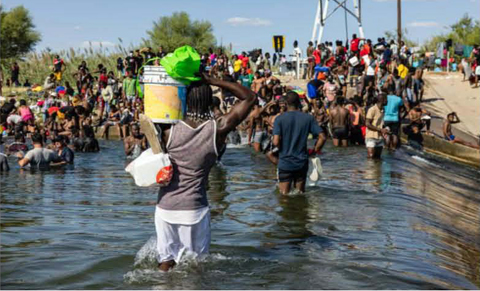 Migrant caravans, reportedly from Haiti, have come in faster than Del Rio personnel can accommodate and process them, so the scene quickly became chaotic with as many as 16,000 reportedly living under the bridge for days after the bridge was shut down.
The number of migrants at the border “shanty town” on American soil has been a fluid number as many have been processed and released as more came in. Reports explain that each person was given a “carnival-like” ticket with a number, and when their number is called they are able to processed (finger printed and given a court notice) and released if they are seeking asylum.
Border Patrol agents, troopers, officers and other personnel on the ground are growing more and more weary as any and all resources are spread thin.
Two local men, TJ Richardson of Devine and Dave Gast of Natalia, answered a call to help lift spirits and provide a hot meal to 230 men and women working day and night to secure our border and deal with the unprecedented situation in Del Rio.
“We could see hundreds of CBP, DPS, Military members and law enforcement officers working in the area and it made us feel like our efforts were not near enough to meet the demand. It was if we were trying to put out a brush fire with a glass of water,” Richardson wrote after returning home Monday evening, encouraging citizens to volunteer any effort they can toward the crisis (see more in separate article).
A writer for the Center for Immigration Studies recently interviewed several of the migrants attempting to get a grip on how and why this situation developed the way it has, so quickly.
“The surprising answer, which the migrants provided independently in different places and at different times, was universal: on Sunday, September 12, the Mexican government effectively sent a mass of migrants it had bottled up for months in its southern states to the American border,” the article published Saturday, September 18, states. “Out of the blue,” one migrant explained, he was told he was free to leave without papers “in celebration of Mexican national independence the following week” (referring to the El Grito celebration and holiday).

While border patrol agents are occupied trying to process and bus migrants, Texas DPS troopers from all over the state, including local troopers, have been called to hold the line. A striking image shows over a hundred trooper vehicles lined up along the river to deter migrants from crossing.
A border patrol agent told the Washington Post- “Literally, we could not have any semblance of control down here without DPS. DPS has thankfully come out here and helped us out dramatically. We literally could not control this or have even some semblance of control without DPS, National Guard, and all the other local stakeholders that are out here.”
Migrants were previously able to go back and forth from Mexico to American Soil to get supplies for the migrant camp, where some have reportedly built huts made from Carrizo cane found along the river.
The AP news and national news report that the federal government will begin flying migrants “back to Haiti” starting this week. Though it is unclear exactly how many are being released rather than flown out, or who.
A few days after 16,000 arrived in caravans, this Sunday, Department of Homeland Security tweeted “If you come to the United States illegally, you will be removed. Please do not attempt this perilous journey.”
A blogger for immigrationreform.com gawked at that statement, saying “.unless you bring a kid with you…unless you say you’re under 18, unless you claim ‘sanctuary’ in a church,” and the list goes on and on. “As currently interpreted, the law allows virtually any migrant to apply for asylum. Since the immigration court dockets are so backlogged, applicants can stay almost indefinitely to plead/appeal their cases.”
A frustrated few have begun trickling back to Mexico according to some with their ears to the ground.
A recent article on immigrationreform.com quoted an officer helping to hold the lines, saying, “It looks like a third world country down here, NOT America.”