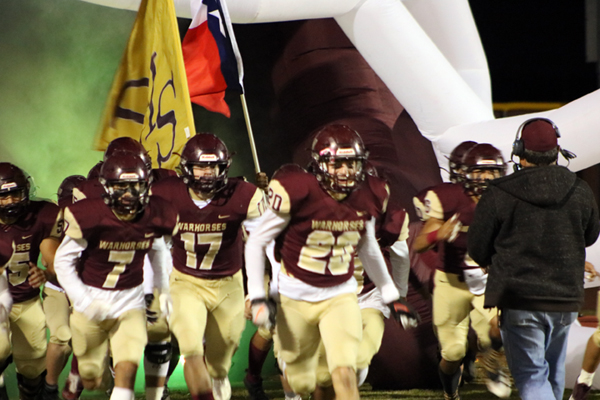 Devine tackles Ingleside Friday night at Harlandale Memorial Stadium. The two 8-2 teams square off as the Warhorses represent District 15-4A DII while the Mustangs come out of District 16-4A DII.
Devine finished 4-1 in district to claim the second place spot. Ingleside also went 4-1 to get third place.
Mustang season flow
Ingleside kicked off its 2021 season with six consecutive victories including a 15-10 win over usually tough Mathis in the first game of the year. After their week one win, the Mustangs defeated Aransas Pass 68-6, Gonzales 35-19, Rio Hondo 34-21, Robstown 44-8, and Corpus Christi West Oso 37-20.
The Mustangs tasted defeat for the first time in week seven in Rockport-Fulton as they went down 14-49. Ingleside found their winning ways twice more, once against Port Isabel 52-14 and again versus Raymondville 21-6.
Ingleside enters Friday’s Devine matchup coming off a 30-16 loss to Sinton in their district finale. There was no shame in that Sinton loss as the Pirates went a perfect 7-0 in district play and 9-1 overall.
Gomez’s take
Devine Head Coach Paul Gomez shared his weekly assessment of the Warhorses upcoming competition.
“Ingleside is a really good team. They are 8-2 and have played some really good teams. Offensively they are led by their quarterback (#3) who runs their wing-T offense. They have a good fullback (#28) that runs hard and the other three, #15, #7, and #6 have big play ability. They have a big offensive line with a big tight end (#20). They are a running team primarily, but they have the ability to spread you out and throw the ball as well.

Defensively they are solid. They held Sinton to 10 points through three quarters and to 13 points into the 4th quarter before Sinton took advantage of some Ingleside miscues and won 30-16. They have a very good defensive line led by their big noseguard (#76). They run a 3-3 stack defense and their tackles are big and very aggressive. Their linebacking corp is very good, led by middle linebacker #28. He is as good as they come. All of their backers have good size and can run. The back end likes to disguise their coverages but most of the time they will end up in cover-3 or man-free. Their defense can be a game changer, so we have our work cut out for us. But, it is the playoffs and that’s what it is supposed to be like.
Every team will be good from now on. We have to raise our level of play and execute at a high level. We are excited for the opportunity to compete in the state playoffs and I know our boys will leave everything on that field Friday.
When the dust settles we will see where we stand. I have a lot of confidence in our group of young men.
We are not ready for this season to end and our boys are excited to be here!”
Ticket information
Good old fashioned money can be used to watch the Horses take on Ingleside for the Bi-District Championship at Harlandale Memorial Stadium in San Antonio at 7pm. Tickets can be purchased with cash only at the gate. Adults $7, Students $4.
By Jerel Beaty
Staff Writer