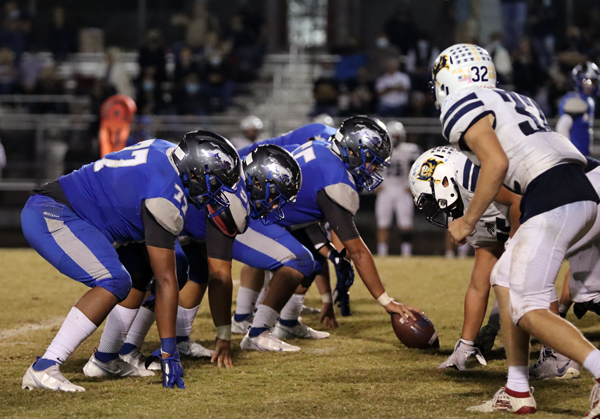 The Natalia Mustangs (6-3, 4-2) will square off with the Hebbronville Longhorns (4-2, 3-1) Friday Night in LaSalle County at Myers Stadium. This will be the 2nd ever meeting between the two programs. 2020 marks the 32nd playoff appearance for the Hebbronville Longhorns and the 12th for the Natalia Mustangs including their 5th since 1989 and their 3rd in the last four seasons.
“I will never take marking the playoffs for granted,” Natalia Head Coach Ilyan Martinez stated. “Especially during these times when football is not guaranteed literally day to day. We are excited to get back into the playoffs and excited about facing Hebbronville.”
Hebbronville Outlook
The Pride of Jim Hogg County, Hebbronville got off to a late start due to Covid restrictions in their county. The first game of the season for the Horns was on October 2nd, as they picked up a lop-sided 66-7 victory over the Falfurrias Jerseys. Hebbronville lost their final non-district battle 28-20 to Bishop, before beginning a very shortened 16-3A action.
In district play, Hebbronville beat Santa Rosa 40-7, won a forfeited game due to Covid vs. Monte Alto, beat Banquete 60-14 before falling to Odem in a District Title game last week 28-0. This district was separated into two zones to shorten district play resulting in the shortened schedule.
A season ago Hebbronville based the majority of their offense out of the Wing-T and the Natalia defense came to play at Jourdanton Indian Stadium. Natalia held the Hebbronville offense to just 87 yards and on 39 carries and forced the Horns to do something they don’t like to and that was throw the football. Hebbronville managed 117 passing yards, but Natalia forced five interceptions and three fumbles lost.
This season, the Horns have added a wrinkle to their offense according to Coach Ilyan Martinez.
“They have surprisingly run more spread this year than they have in the past, but they still jump into their Slot-T package, especially in short yardage situations,” Martinez said. “Up front they are typically big and physical and this year is no different.
According to Coach Martinez, their QB Matthew Tolentino is now a junior and much improved.
“When they jump into their Slot-T formation, RB #32 Sophomore Joshua Almaraz is their bell cow. He is very athletic and does a great job with the ball in his hands.”

Defensively, Hebbronville gave up 246 rushing yards and only 43 passing yards a season ago to Natalia.
“They base out of the 4-3 cover 2 defense and again they are big up front and try to establish the line of scrimmage,” Martinez said. “Defensive tackle #52 Senior Daniel Gonzales has great ball get off and creates some issues up front for us. We will have to account for him all night. While they are young in the secondary, I am really impressed with their athleticism. Their linebacker core is led by # 50 sophomore Paul Baez and he is a downhill player.”
I reached out to Coach RJ Montalvo on twitter, but as of press time he had not responded to my questions in reference to the Bi-District Playoff game.
Natalia Outlook
The Natalia Mustangs are coming off one of their best Friday night appearances in program history where they came up short vs. # 3 Poth despite leading the Pirates in two separate occasions.
“I am really proud of our kids and coaches and I thought we represented our town and community with pride vs. Poth,” Martinez said. “We have been building a culture here for a long time and to see us go toe to toe with one of the best teams in the state if something I could not be happier for.”
“Hebbronville is a different team from a season ago, but so are we and I like the match-up,” Martinez added. “We are excited to represent our town in the state playoffs again.”
Last week vs. the Pirates, the Mustangs were without two crucial starters, but ti didn’t slow down the boys in blue. Martinez mentioned a week ago, how positive it is that his squad has the next man up mentality. This season, Natalia has been without at least 1-2 if not up to six starters in each of their games, but the boys in blue have not used that as a crutch to not produce.
This coming Friday, the Mustangs should be able to find success on the ground and thru the air vs. the Longhorns. Patience will be key and ball security as four turnovers proved to be the difference vs. Poth along with a few calls that didn’t go their way.
Vs. the Poth Pirates, four different players touched the ball on the ground and eight different players touched the ball when it was put in the air. This will be needed in order to be successful vs. Hebbronville along with a physical front and defensive effort as we saw a week ago also.
Playoff is set
The Hebbronville Longhorns and the Natalia Mustangs will battle at 7:30 p.m. at Myers Stadium in Cotulla Friday night. Cotulla does have some of the most stringent Covid restrictions of any school district and will keep fans socially distanced all night long.
Natalia will be the home team Friday night and tickets will go on Sale Wednesday morning School Events Tickets “Search Cotulla or Natalia Football”. Tickets will be pre-sale ONLY and are very limited.
Come out, Be Loud, Wear Blue and White and let’s make Myers Stadium just like we made Mustang Stadium last Friday night- A True Home Field Advantage! #TTP
By Eric Smith
Staff Writer