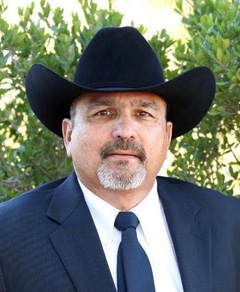 Mike Morse was elected Frio County Sheriff during the General Election held on Tuesday, November 3.
Morse, who ran as a Democrat, tallied 3,267 votes in defeating Republican challenger Richard Gandara, who received 1,949.
Morse will replace outgoing sheriff Albert DeLeon, whom he defeated in the Democratic primary run-off election in July. In that election, Morse received 1,660 votes to DeLeon’s 1,041.
According to the county’s election summary report, 10,460 votes were cast, including 1,362 ballots by mail, 6,121 during early voting, and 2,977 on Election Day. All 11 voting precincts have completed their returns.
Results are unofficial until votes are canvassed, which by state law can be completed no later than the 11th day after an election.
By Marly Davis
Staff Writer