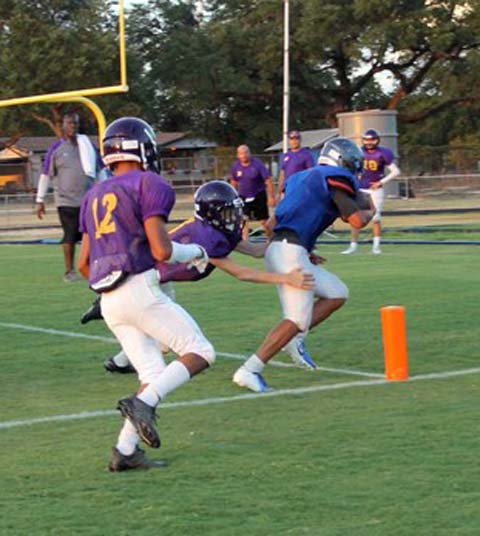 The 2019 Natalia Mustangs wrapped up final preparation for their 2019 season last Thursday evening at Mustang Stadium. Overall improvement was evident versus Sabinal and St. Anthony, as the Stangs looked more explosive offensively and much more gritty on the defensive side of the football.
As a result, the boys in blue were able to score on a number of occasions while pitching an overall shut-out versus the two visiting programs.
“I was very pleased with the way our kids played,” Coach Ilyan Martinez said. “We were the most physical team on the field and that is always a focus of ours.”
One week prior to the scrimmage, the Mustangs looked a bit inconsistent during their road trip to Brackett. Coach Martinez was asked his thoughts on what improved from the Brackett scrimmage and he had the following to say: “”I thought that we cleaned up the penalties and turnovers from scrimmage one. I also felt like we showed a lot of growth in fundamentals.”
Offensively versus the two teams last Thursday, the Mustangs looked very balanced with their run and pass game and had a number of individuals shine. There was also improvement from the men up front when it came to protection and opening key holes resulting in much improved overall success.
Season Opener versus the Cole Cougars
Cole Cougar Outlook- The Natalia Mustangs will open the 2019 season at Ft. Sam Houston Friday night against the 15-3A (Div.I) Cole Cougars. A season ago, the Cougars were able to pitch a 19-0 shut-out victory over Natalia as inconsistency offensively and a few broken coverage’s defensively proved to be the difference.
The Cougars are coming off a 9-3 overall season where they finished 4-2 in district play. This season, the Cougars welcomed back four offensive starters offensively and five defensively to their squad not counting any players who possibly moved into district due to their military placement.
The Cougars are picked by most to finish in 4th place in a very challenging district behind the talents of Jourdanton, Marion and Randolph. Cole is picked ahead of Cotulla, Lytle and Karnes City. Natalia will face a total of four teams during non-district from this district.
“Cole is a good football team,” Coach Ilyan Martinez said. “Coach Reyes and his staff always do a great job of having their guys ready to play. They are young, but very athletic and dangerous. We will have our hands full on Friday.”
The Cole Cougars will continue to base their offense our of a spread formation.
“They have a really good running back who can move when he gets out in space,” Martinez said. “We will have to find a way to slow him down.”
“Defensively, their line is aggressive,” Martinez said. “They have some big strong interior lineman and some athletic defensive ends. We will have to do a good job up front keeping them on their heels and off balance.
Natalia Mustang Outlook- The Mustangs will continue to show improvement offensively and gain confidence with every snap. This was evident from the start of two-a-days, up until last Thursday.
Offensively, we will have to keep them off balance,” Martinez said. “Defensively, running to the ball and being great tacklers will be imperative.”
Playing fundamentally sound defensively will be key due to their explosive speed. Many times over the history of the two programs, Natalia has been the better team, but once or twice a game, broken coverage resulted in a running back getting out in space and the fact was, Natalia didn’t have the speed to catch him.
“We are excited and anxious to get the season started,” Martinez said. “We know we have a special group of kids and we have been putting in a lot of work since the season ended a year ago. We feel like our record didn’t represent what we were about. When you have a season like that, now we have the opportunity to get it right and that can’t come soon enough. We know we have a group to do special things and this will be our goal weekly.”
The season opener will begin Friday night at 7:30 p.m. at Ft. Sam Houston recently renovated Cole Cougar Stadium. Remember to enter the base at 4001 Winans Road in San Antonio as this will be the ONLY gate you can access the stadium from. This is the same gate Natalia fans have used for years for all sports.
Be sure to come early, be loud, wear blue and cheer on the Mustangs as they look to start the 2019 season with a victory over the talented Cougars.
By Eric Smith
Staff Writer