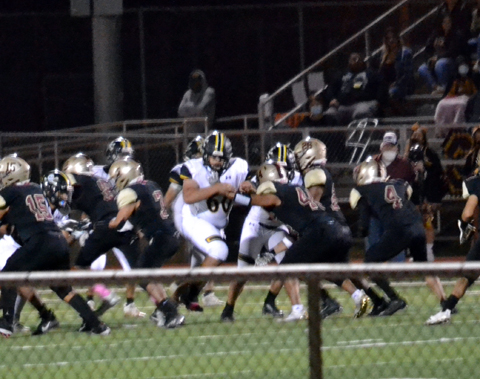 The Lytle Pirates travelled to Cotulla for their fourth district game of the season. Cotulla would not allow visiting fans into the stadium; however, they graciously allowed the Pirate fans to watch from the Southeast parking lot.
Lytle won the coin toss and chose to defer to the second half. Defense of both teams ruled the night in the first quarter. Lytle got the first break of the game when Bubba Solis recovered a muffed snap by the Cowboy punter to give the Pirates a 1st and 0 on the Cowboy 41-yard line. Lytle settled on a 35-yard field goal by Daniel Aguirre late in the first quarter. The first quarter ended with Lytle leading 3-0.
The second quarter was a defensive struggle with neither team able to mount scoring drives. Finally, Lytle drove deep into Cowboy territory thanks to a long gain on a screen pass from Carson Aldridge to Vincent Casanova. The Pirate drive stalled on the Cotulla 15-yard line forcing a field-goal attempt. The kick was no good, but a roughing the kicker penalty gave Lytle a first down. The Lytle drive was stopped when a 4th down Pirate pass fell incomplete. Lytle got another break when Pirate Rylan Wagner recovered a Cotulla fumble on the 15-yard line. Lytle wasted no time in scoring on a 15-yard touchdown pass from Carson Aldridge to Logan Wilson. The PAT by Aguirre was good bringing the score to 10-0 at the 3:41 mark of the second quarter. Cotulla responded with a long drive into Pirate territory until a Cowboy was intercepted by Collin Aldridge on the Pirate 10-yard line. Neither team scored so the first half ended with Lytle in the lead 10-0.
The third quarter was all Cotulla with the Cowboys defense bottling up the Pirate offense. Cotulla opened the third quarter with a 1-yard touchdown run. The PAT was good cutting the Pirate lead to 10-7. Lytle fumbled on the next series giving the Cowboys a 1st and 10 on the Lytle 45-yard line.
The Pirate defense held, forcing a punt. The defensive stop was lost when the Pirate punt returner muffed the Cowboy punt on the Lytle 10-yard line. The football was recovered in the end zone for a touchdown. The PAT was good giving the Cowboys a 14-10 lead. On the next series, once again the Pirate offense was stalled and Lytle punted. The Lytle defense forced a punt when a third-down pass was knocked down by Cort Haltom.
Once again, the Cotulla punt was dropped by the Pirate return man giving Cotulla a 1st and 10 on the Lytle 12-yard line. The third quarter ended with Cotulla leading 14-10.

Cotulla scored quickly to open the last quarter on a 5-yard run. The PAT was good bringing the score to 21-10 in favor of the Cowboys. Now when all hope for a Pirate victory seemed to be vanishing, the Pirate offense got rolling. After recovering a Cowboy on side kick on the Pirate 31-yard line, Lytle mounted a scoring drive. After two running plays resulted in a 1st and 10 for the Pirates, Mark Cantu scored on a 51-yard run. The PAT by Aguirre was good cutting the Cotulla lead to 21-17. Cotulla was stopped once again by the Pirate defense and the Pirates took over at their 35-yard line. Runs by Collin Aldridge and Vincent Casanova resulted in the Pirates driving into Cowboy territory. A Cotulla pass interference penalty resulted in a 1st and 10 on the Cowboy 25-yard line. The Pirates scored on a 25-yard run by Daniel Aguirre. The PAT was unsuccessful leaving the score Lytle 23, Cotulla 21. A 15-yard penalty on Aguirre’s touchdown run resulted in Lytle kicking off on the Cotulla 45-yard line. The Lytle on side kick was recovered by Santiago Garcia giving the Pirates a 1st and 10 on the Cowboy 30-yard line.
Pirate Vincent Casanova rambled 30 yards for another Pirate touchdown bringing the score to Lytle 29, Cotulla 21. The PAT was no good, but Cotulla was offsides giving the Pirates another chance. Lytle tried to go for 2 points, but the 1.5-yard run was stopped short leaving the score 29-21.
Cotulla mounted a drive that resulted in a 22-yard touchdown bringing the score to 29-27. Just like last week’s game with Randolph the game came down to a 2-point PAT. Carson Aldridge stopped the attempt to tie the game with a saving tackle just inches from the goal line.
Cotulla’s on-side kick was recovered by Pirate Darren Martinez on the Pirate 43-yard line. The Cotulla defense forced a Pirate punt and took over deep in their territory. A Cowboy 30-yard run was nullified by a 15-yard personal foul penalty forcing the Cowboys back to their 10-yard line. Cotulla made two first downs, but their final trick play of a pass reception followed by 5 laterals or backward passes ended the game when the Cowboys receiver fell down. The Pirates won the game 29-27!
Leading the Pirate rushing attack were Mark Cantu, Vincent Casanova, Daniel Aguirre, Carson Aldridge and Collin Aldridge. Carson Aldridge was the leading passer with Vincent Casanova and Logan Wilson leading the receivers. On the defense, Pirates were led by a great team effort. Leading tacklers were Rylan Wagner, Vincent Casanova, Robey Harold, Albert Aguilar, Bubba Solis and Diego Garcia-Hernandez. Wagner recovered a fumble, Solis tackled the Cotulla punter on 4th down, and Collin Aldridge had an interception. Other stand-out plays included Cort Haltom batting down a pass and recovered on-side kicks from Darren Martinez and Santiago Garcia.
Special thanks to the Cotulla administration that allowed the Pirate fans to tailgate in the parking lot. Also, many thanks to Ricky DeLeon and his equipment that allowed the fans to watch the live-streaming of the game. Many thanks to the Cotulla cheerleaders for leading us in a Pirate cheer demonstrating their fine sportsmanship.
The Pirates travel to San Antonio Thursday, October 22nd to face the Cole Cougars. I hope to see all you Pirate fans there!
By Bill Herring