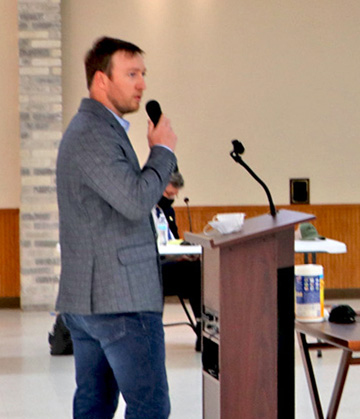 Councilmen David Emery and Sam Cortez were sworn in at the Lytle City Council meeting this past Tuesday, May 10th, and also discussed was the third council race between Joseph Morrow and Guadalupe Castro, which came down to one vote. Election results showed Morrow won 11-10, but two voters came forward noting they believed they voted in the wrong district. The Elections office said the election will stand as is, however Mr. Morrow stated he would not feel right about accepting the elected position, knowing these facts. His opponent Mr. Castro encouraged Morrow to go ahead and accept. Both candidates are extremely gracious about the error, and want what is best for the community.
District 1 Incumbent Councilman Castro said, “He won. He should take office. I had accepted that. He won.”
According to election laws, the vote stands as is. The only way to change the outcome of the election would be for either candidate to file a lawsuit and that wasn’t an option either one of the candidates wanted to pursue.
Mr. Morrow was not present at the meeting, but stated in a letter to council and to the community, “While it would indeed be an honor to serve our community as Alderman of District 1, I cannot do so at this time in good conscience. It has come to my attention that there were two votes in my favor that were cast in the wrong district and should not have been counted. It turns out that two votes were enough to tip the election. While it would have been my joy to serve on the council, and under Mayor Gonzalez, with this information coming to light it is clear that the voters of district 1 elected Guadalupe Castro to represent them, and I, therefore, must decline the appointment as Alderman for district 1. Lord willing, I will run again in the future and, if I should win, it will be reflective of the wishes of the voters. I thank you all for your time, and perhaps in the future I will have the blessing of serving on the council. My sincerest regards, Joseph Morrow.”

Since Morrow declined the position to Castro, and Castro felt like Morrow should go ahead and take the seat, council will instead have to appoint someone. They plan to accept applications and appoint someone to fill the seat for the next year until the following May election.
Council to consider abatements
Lytle City Council will consider offering tax abatements requested by developers who want to build a new upscale apartment complex. Collin Stoudemire and Dan Leverett presented the idea of building 175 upscale apartments in Lytle, asking for tax abatements. The council agreed to hear their proposal in upcoming meetings. This initial plea was to ask for the opportunity to propose their plan and to ask for a 10 year tax abatement as a show of support and need.
Stoudemire said the one to three bedroom apartments were designed to look like homes. Nice apartments in a community setting with amenities like a pool and playground, and on staff maintenance. If approved it would take up to 3 years to be fully operational possibly. The first year for planning and investing, the second year for building it, and the third year to get all 175 rented. He stated there is nothing comparable to this in Atascosa County and in an unproven market, so they would need incentives to attract investors. Financing would most likely be through HUD but it was noted this would not be low rent homes. He stated these apartments would be very nice market value rentals. The hope is to increase quality of living for residents with a high quality development and increase city revenues, and be a population consolidation from surrounding communities.

The development team is Stoudemire and Dan Leverett, who has 30 years experience and has developed over 5 million square of multifamily, rental, office, and hotel. Leverett is the founder of Place Development and has a MBA in Civil Engineering from Texas A & M.
Collin is a 3rd generation Lytle resident, Lytle Volunteer Firefighter/EMT, Air Force Veteran, UTSA graduate in Real Estate Finance & Development Masters Program. Joshua Consemiu, an Analyst with Mason Joseph Company was also present to explain finance opportunities and answer any questions about HUD.
By KK Calame and Kayleen Holder