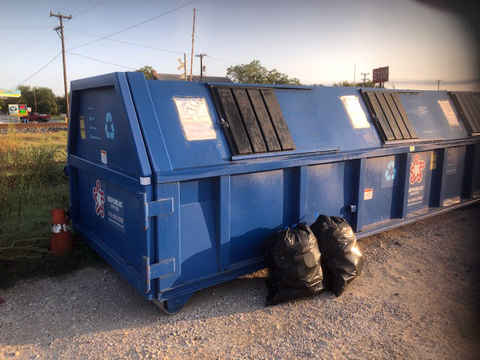 Trash collection bills are going up in La Coste, but customers will get more service for their money.
Beginning in November, the basic monthly charge for a single-bin pickup will be $27.35, up from $24. The higher fee includes a 75-cent increase levied by Republic Services, the city’s contracted collector.
The City Council on Sept. 22 raised the monthly bill to $27.35 to double the number of brush and bulk item pickups in the community. Those curbside collections will now occur quarterly instead of semi-annually.
City Administrator George Salzman expects the first quarterly pickup to be in January. “It will be after Christmas when there’s a lot of packaging that needs to be disposed of,” he said.
As before, the pickup date will be announced on city water bills, on La Coste’s reverse 911 call system and on notices posted around town.
The same collection rules – which include prohibitions on items like construction material, tires, batteries and concrete – will apply, Salzman said.
Councilman Wade Tschirhart predicted that the city “will be cleaner” with more frequent pickups scheduled.
Mayor Andy Keller was skeptical. While supporting more pickups, he cited chronic complaints about brush and bulky items cluttering streets weeks before designated pickup days. Residents are supposed to put items out no sooner than 10 days ahead of the collection date.
On a related topic, the council had looked at adding residential curbside recycling service, but at an additional $7 per month the cost was considered prohibitive.
A large roll-off container in the City Hall parking lot has been used as a community collection point for recyclables. But the expense – compounded by widespread and illegal use by outsiders – made that program unsustainable, Salzman told the News.

“People from outside the city have been filling it up,” he reported.
At $700 per pickup, the city was paying Republic roughly $16,000 a year for the single-point service. With so much of the “donated” material coming from out of town, it was a charge the council decided it could no longer shoulder.
And with Republic among the big waste haulers reporting slack demand and collapsing prices for recycled materials, the service cost to La Coste taxpayers would likely continue to climb.
Republic will roll away the city’s recycling container for good at the end of September, Salzman said.
At its Sept. 22 meeting, the City Council approved a 2020 property tax rate and 2021 budget.
While the council kept the rate at $0.55 per $100 assessed value, higher property values will mean slightly higher tax bills for most property owners in the city.
An average 6.58 percent increase in taxable values will boost the average homestead tax bill from $464 last year to $495 this year, according to Medina County Tax Collector-Assessor Melissa Lutz.
La Coste’s 2021 budget was set at $1,114,350. Among the new expenditures:
Two new (or lightly used) vehicles for the Public Works Department. Salzman estimated that leasing two “basic two-door trucks” would run a combined $1,000 per month.
A 3 percent raise for city employees. Salzman said that would be the average increase, with some workers getting less and others receiving more, based on performance.
Filling vacant positions in Public Works.
Giving a brief update on the city’s ongoing road project (see story in the Sept. 23 News) Councilman Tschirhart, who serves a mayor pro-tem, said more city streets could be resurfaced than originally planned.
“Low material prices and free labor (via an inter-local agreement with the county) – it’s the perfect storm for us. We might be able to do every street in the city before this is all done,” he said.
By Kenric Ward
Reporter