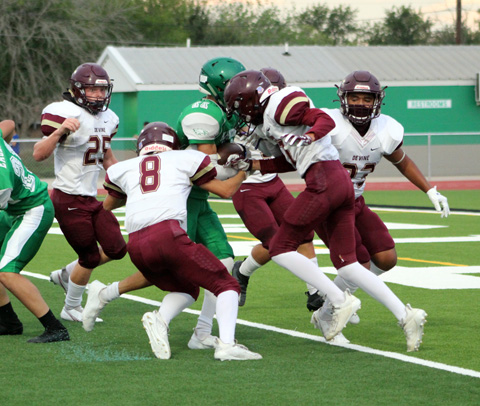 The Devine JV Horses lost 14-20 on a walk-off 70-yard interception return as time expired in Pleasanton last Thursday evening. Although that was the game’s final play, Devine missed several opportunities throughout the contest that could have catapulted them to victory.
According to Coach Heath Poppe, “We scored both our TDs in the second quarter. Both were by Elijah Sanchez on 4-yard runs. Jonathan Weinkam ran in the two-point conversion. Pleasanton had one score in the second quarter and another in the third to tie the game at 14.”
The game remained tied until late in the game. Devine had a goal line stand with a minute left to go in the game that appeared to at least seal a tie.
The Horses do not settle, we all know that by now. On a third and 10 from the 50, the Eagles picked off a pass and returned 70 yards as time ran out giving the Eagles a 20-14 victory.
Devine had no less than three opportunities to score inside the twenty but failed to do so.
Rocky Balboa
Even though this game did not work out in the Horses favor, one cannot blame the coaches for going for it late in the game. There is an old saying that a game ending in a tie is like kissing a sister. I honestly cannot say if that is true or not but to “Go For It” and try to pull out a great win is what sub-varsity teams should do.
Sub-varsity teams are not playing for playoff position or a gold ball. Developing a winning attitude begins with trying to win every time players step onto the field.
Better luck next time, Warhorses and keep playing the game to win until time runs out! Even Rocky lost at the bell one time…
By Jerel Beaty
Staff Writer