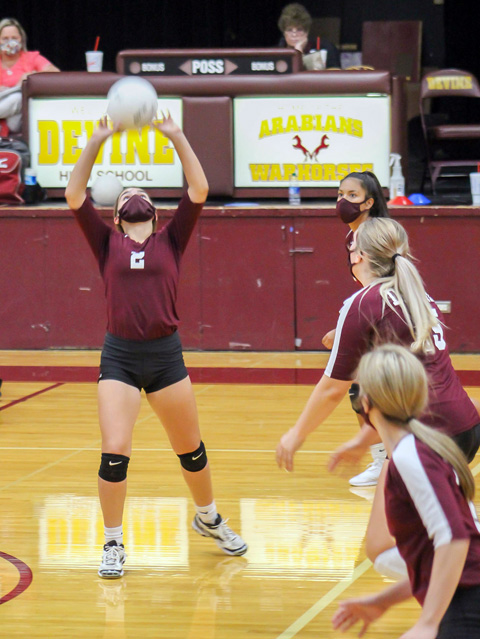 The Freshman Arabians suffered their second loss of the season when they faced Antonian Prep on September 15th. Falling 21-25 and 24-26, they fought hard against the tougher school and made them work hard for every point. This loss puts them at 12-2 for the season.
Kills: Denise Contreras 4, MaKayla Rivera 1, MaKayla Schnautz 4, Avery Mobley 1. Digs: Yancey Parson 1, Kelsey Dishman 2, Contreras 7, Rivera 1, Liz Beth De Los Santos 4, Schnautz 4, Mobley 2.
In their second game of the week, the Freshmen took on Poth and won 25-9 and 25-21. They took command of the game and played at an aggressive pace and the Billies could not dig out their kills. The Arabians also made good work of their serves and placed the ball well enough to tally 12 aces in the two sets.
Kills: Contreras 5, Romano 5, De Los Santos 1, Schnautz 9, Mobley. Digs: Parson 1, Dishman 1, Contreras 2, Romano 1, Schnautz 1. Aces: Parson 1, Contreras 3, Romano 1, Schnautz 5, Mobley 2.
By Dicy Chambers
Sports Writer