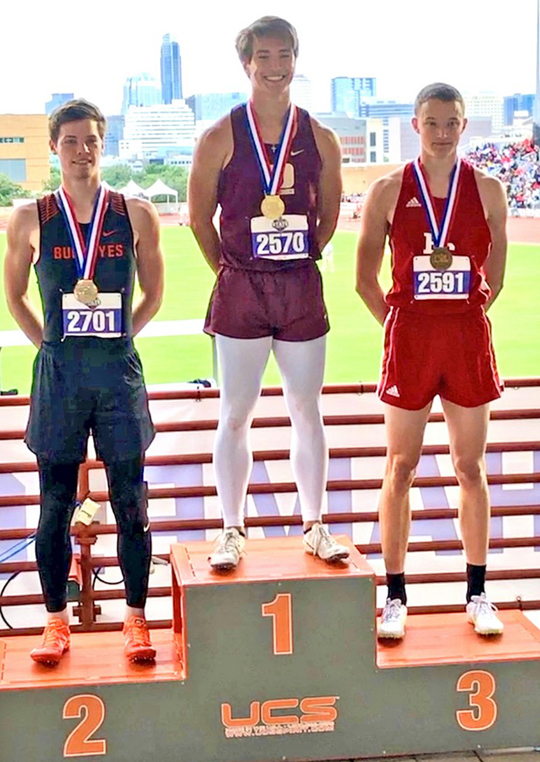 Going into a track event with the best time and then actually coming out with the fastest time is easier said than done. However, Guido Zapata made six years of unwavering dedication and extremely hard work look easy as he captured the Class 4A State Championship in the 110m Hurdles in Austin last Saturday evening.
With a throng of Warhorse Nation marooning out Mike A. Meyers Stadium, Guido fed off the local vocal support to cruise to his personal best 13.84 on the state’s biggest stage in the final event of his high school career.
“Guido ran a flawless race,” stated Head Coach Lon Cozby. “The kid from Silsbee beat him to the 1st hurdle but Guido caught him at the second and by hurdle #3 Guido was out in front and never looked back… until the end to see his time!
“He looked confused too because the rest of the field was so far behind! When it showed 13.84, he let out a huge yell and pointed to his cheering section in the stands.
“It is such a great accomplishment for such a great kid. He did not lose a single race this year in the 110s. And from district on, each race he has gotten faster…and faster…and unbelievably fast at State.”
Not so close
Guido beat runner-up Parker Dodd of Gilmer by .37 seconds (14.21). That .37 seconds sounds close, but in track terms it is politely considered a “tail” whooping.
Six classifications with nine hurdlers from each class provided a field of 54 runners that ran the 110m Hurdles over course of State Championship weekend. Of those 54, the only one to top Guido’s time was Class 6A, Clear Springs hurdler Kirk Collins who ran a 13.82, or .02 seconds faster than Zapata.
Now, .02 seconds…THAT’S CLOSE!
24 hours
To paraphrase Guido, the 24-hour period leading up to the race did not go exactly as planned. Guido summarized it this way…
“Friday morning started good as the high school, middle school, and elementary each had a send-off. The high school and middle school were drive-outs but all four of us got to walk through the elementary kids. They started chanting “Go Guido Go!” which was really cool.
The night before the race, I could not sleep at all. When I went to bed, I was not able to fall asleep. I was awake until 2:30-3:00 in the morning just lying there thinking about the race. I finally fell asleep, but woke back up around 6:30am.
It was pouring rain and cold so we went to eat lunch before going to the stadium to watch Matthew Boling of Strake Jesuit long jump. By the time we got there, he was not jumping anymore.
After I stretched and warmed up, before I knew it they were leading me onto the field. I looked up into the stands and saw all the maroon shirts from Devine. Seeing all those people, and hearing the shouting from Mr. and Mrs. Benavidez, really relaxed me and let me know that I was capable of winning the whole thing.”

Two school records
Guido’s 13.84 time beats the old school record of 14.06 accomplished by Jared Cassiano back in 1996. The gold medal is also the first in school history for the Warhorses.
It is believed the first Warhorse to medal at State was Billy Hoover in 1977 in the 1600m Run. Dillon Ricord earned a bronze medal in the 100m Dash and a silver in the 200m Dash in 2016.
If anyone knows anything to the contrary, please share and my apologies to that athlete and his family.
A little help from my friends
Last week when I remarked off-the-cuff that practices were a little lonely for Coach Cozby and Guido, I failed to mention two outstanding members of his support group that have helped with practices and just about anything else within reason leading up to State.
Seniors Donavon “DVO” Camacho and Dylan Aguirre worked tirelessly to support, encourage, and prep Guido for his gold-medal winning 13.86 seconds.
DVO’s and Dylan’s main responsibilities during practice included setting up hurdles, stretching Guido, and about anything else that was asked of them. Although each were with Guido every day and at the meet, each were also nervous, anxious, and excited for the opportunity that was lying ahead for the eventual state champion.
“I wanted him to win and was nervous for him because in a race like that anything can happen,” DVO stated. “He was a little behind going into the first hurdle or so then by the time he hit the fourth hurdle we all knew it was over.”
Even though Dylan had some nerves going as well, he took a little more comic approach to the race by showing up in a track uniform.
“I wanted to be ready just in case Guido couldn’t run for some reason,” Dylan said tongue in cheek. It was a great trip to Austin and it was exciting to help Guido along the way.”
Guido heaped praise for his traveling-crew as well. “Those guys made the trip more fun and helped relax my nerves. We laughed a lot and I appreciate them for helping me achieve my goal.”
Coach Cozby knows big accomplishments take a total team effort saying, “DVO and Dylan kept Guido relaxed and calm. They kept him from overthinking.” 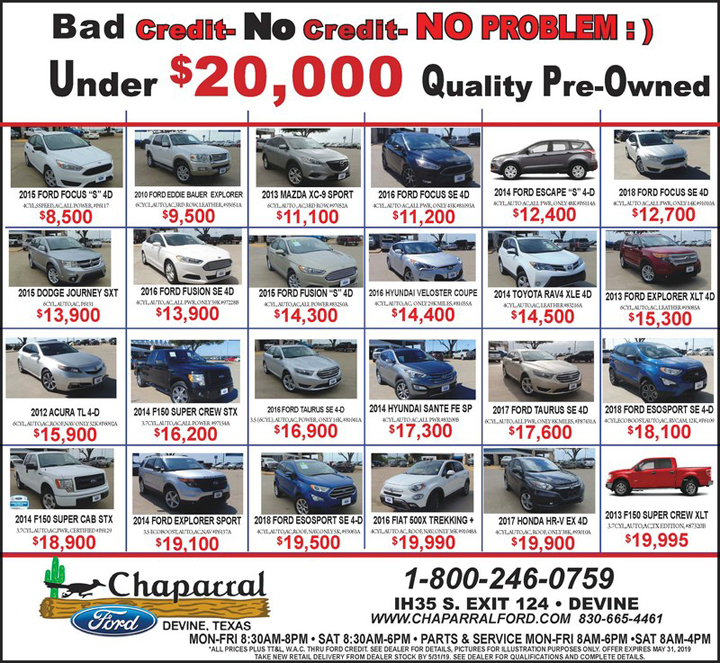 From the stands
Preslee Quisenberry, senior, UIL Editorial Writing State Champion—By the fourth hurdle, all of us in the stands KNEW he was going to win. I don’t know much about track but I do know that race was not even close!!
Alissa Stehle, senior—I felt myself gradually getting nervous for him as we were walking to the stadium. Then, when he was walking across the field and getting set, I stood still holding Dana Aaron’s hand because we all couldn’t wait to watch him. All I wanted was him to do his best. He deserved it after 6 years of practice and all that has happened.
Kim Aaron, Devine Athletic Booster Club Treasurer/Secretary—Experiencing that State Track Meet with our Warhorse, Quentin Zapata, was exhilarating to say the least. We anxiously awaited the start to cheer Quentin. His work ethic and dedication to his sport were evident that day. We were ecstatic to be able to experience this rewarding victory with Quentin and his family. It is an experience we will not soon forget.
Chad Quisenberry, Devine Athletic Director—This kid has been a tireless worker and it paid off. To run a personal best at the State Meet means the moment was not too big for him. We are all extremely proud of Guido!
Quentin?
If you did not read Guido’s Senior Spotlight during football season, many of you may not know that his real name is Quentin. So how did you become ‘Guido’, Guido?
“As soon as I was born, my dad called me ‘Guido’. He loved watching Italian Mafia movies and said I was his ‘little Guido’. The nickname stuck and now most people that know me call me by that name.”
Video
No doubt there was a strong contingent of Warhorse Nation fans in attendance. However, if you were not able to witness Guido’s championship performance first-hand, Jim Sessions has it loaded onto his Facebook and Twitter accounts. Watch it a time or two, and give it a thumbs up.
Class 4A results
1. Guido Zapata, Devine, 13.84
2. Parker Dodd, Gilmer, 14.21
3. Philip Hundl, El Campo, 14.30
4. Tommy Bowden, Brownwood, 14.50
5. Demetrius Uplegger, Venus, 14.64
6. Darshon Turk, Silsbee, 14.69
7. Christian Marshall, Wimberley, 14.81
8. James Rodriguez, Lamesa, 14.85
9. Tra Fluellen, Gilmer, 15.37
State Top 10
1. Kirk Collins, LC Clear Springs, 13.82
2. Guido Zapata, Devine, 13.84
3. Treyvon Mays, Spring, 13.85
4. Ryan Williams, Arlington Bowie, 13.88
5. Trey Smith, Frisco Independence, 13.99
6. Colin Price, Killeen, 14.10
7. Cale Kassen, Valley View, 14.12
8. Jeremy King, Dallas Life Oak Cliff Trinity, 14.15
9. Dalton Holland, Mount Belview, 14.19
10. Parker Dodd, Gilmer, 14.21 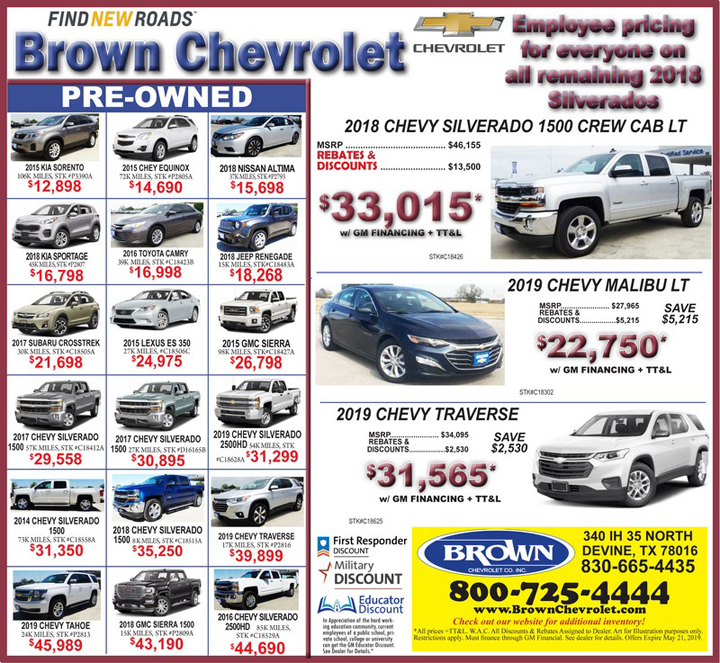 What’s next
I asked Guido how many college scholarships he has had since he won 4A and finished second overall out of all six UIL classifications. Sadly, he stated “None.” If there is anyone out there looking for an outstanding person, and dedicated athlete, and one heck of a hurdler, you should contact Guido ASAP.
Guido went from running a 15-something his sophomore year to running a personal best 13.84 as a senior. He wants to compete at the next level and having that “want” is the first step to continued improvement.
Final thanks
Guido, you did Devine High School, the Devine community, your family, your friends, Warhorse Nation, Region 4, and the entire state of Texas proud by winning that gold medal. You deserve the title “State Champion” just as you deserve the opportunity to compete at the collegiate level.
Personally, thank you for not only always being one of the first to respond to my unending texts and needs for quotes after football games or track meets but mostly for being the most respectful, genuine human being you could possibly be. You were definitely raised right.
Warhorse Nation and Devine ISD wish you the absolute best in your future endeavors. Thank you for all the memories you provided to so many people during your outstanding Warhorse athletic career.
By Jerel Beaty
Staff Writer