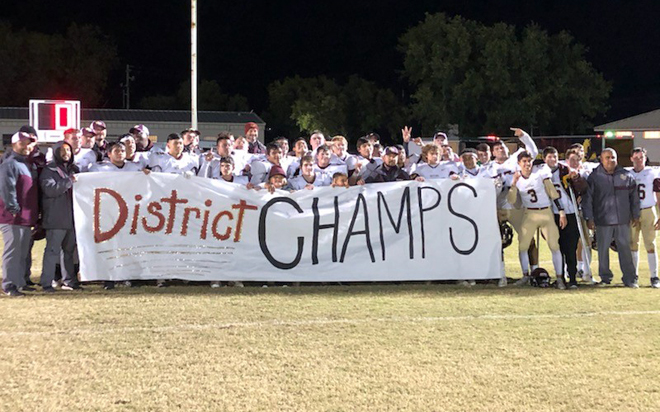 Devine Head Football coach Paul Gomez is excited for Friday night’s bi-district showdown against the Llano Yellowjackets. A year with a few ups and downs culminated with a district championship clinching victory over Carrizo Springs on November 9. Just as the pre-district and district portions of the Warhorses’ season is over, a new portion began shortly after 10:00pm last Friday night.
“Our next preseason goal after winning district was to make a run in the playoffs. Well that starts now,” Gomez began saying about Devine’s upcoming opponent. “We have a very good Llano team that we are facing on Friday. District 13 is one of the toughest districts in the state. When Cuero does not make the playoffs after giving district leader Navarro a run for their money two weeks ago and then beating the district number two team Wimberley this past Friday, then you know it is a competitive district. However, we know that everybody in the playoffs is good.
We just have to make sure we have a great plan for the week and then our focus and intensity has to be there. That has been the right formula for us during district and we are going to keep doing what has worked. Our boys are excited and ready to go and so are we! I feel very good about our team and where we are right now so we are 100% all in! We will be ready to go and definitely up for the challenge.”
Offensively, Gomez said, “Llano is a spread-type offense. They have a very good quarterback that throws the ball really well and has great scrambling abilities which gets him many of his big plays. He is very slippery and when he scrambles, his receivers know to turn and run towards his direction, and he normally makes a big play that way.

They have very good receivers! Case Kuykendall (#1) is their biggest deep threat with his speed but they have all made big plays this year. They all can get open and their offensive line has done a very good job keeping the offense rolling. They have good size and play with good leverage. Their running back Donaven Arellano (#3) runs very hard and has great vision. Even being spread they still are around 55% pass 45% run so that is still pretty balanced.”
Defensively, Gomez stated, “that their defense is hard-nosed. They are base ‘okie’ defense with lots of movement. Their T-N-T’s slant and twist a lot and their linebackers and outside linebackers stunt quite a bit. We will definitely have to follow blocking rules and keep our eyes up for blitzes. They have two good linebackers in #35 and #34. They are hardnosed and aggressive and make lots of tackles. The secondary mixes it up going man and zone so they definitely keep things different for offenses.”
Overall, Gomez knows what it takes to win playoff games. It starts with a great week of preparation, which turns into a solid performance on game night.
Gomez wrapped up the preview by commenting that his team and coaches are “excited for this week and ready to go. Now the second season begins and everybody has an opportunity to make a run. We tell the players that these days are the best days of your life!”
Understanding the important a raucous crowd can make, Gomez’s final plea was to Warhorse Nation. “We hope to see everybody at New Braunfels Canyon Cougar Stadium on Friday night at 7pm. Wear your maroon and gold and be loud! These boys need you!”
How they got here
Llano has the identical 6-4 overall record as the Warhorses. Llano comes into the matchup as the fourth place team in District 13-4A DII, finishing 2-3 in district play.
Llano’s season unfolded this way (*denotes district games): Llano 33 Hondo 0, Llano 59 Luling 14, Llano 49 Brady 24, Llano 28 Lago Vista 42, Llano 41 San Angelo Lake View 21, Llano 14 Navarro 55*, Llano 35 Cuero 16*, Llano 21 Bandera 28*, Llano 27 Wimberley 48*, Llano 49 Austin Eastside Memorial 0*.
By Jerel Beaty
Staff Writer