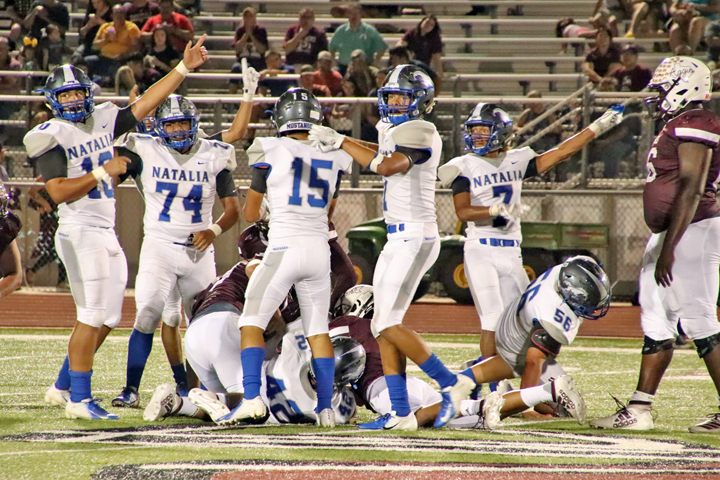 The Natalia Mustangs(7-3, 3-2) are gearing up for their 11th overall playoff appearance and their 4th since 1989 as the Hebbronville Longhorns are looking forward to their 31st playoff appearance in their program history including a seven year streak of qualifying for the playoffs.
The two programs which are separated by 145 miles, will meet for the first time in program history, Saturday night in Jourdanton at beautiful Indian Stadium in the Bi-District round of the playoffs.
Hebbronville Outlook
The Longhorns which call Jim Hogg County home are under the leadership of Head Coach RJ Montalvo who is in his 5th season with the black and gold. The Longhorns are 6-4 overall and 4-2 in 16-3A (Div.II) with losses coming this season to Falfurrias (22-18), Refugio (42-0), London (14-9) and Odem (9-7).
Wins this season have come versus Freer (43-21), San Diego (30-28), Santa Rosa (20-14), Monte Alto (65-0), Banquete (49-20) and Taft (49-18).
The Longhorns returned 6 starters on offense and 5 on defense from their 2018 squad that won Bi-District over Skidmore-Tynan 29-20 before falling to state ranked East Bernard 52-0 in Area.
“Hebbronville is a big, physical football team,” Coach Ilyan Martinez said. “They are aggressive off the ball and they have some skill kids that can run. They have been in some tough games and know how to win. It is going to be a good, physical football game and we are excited about the challenge.”
One issue that is a concern, is the fact like Skidmore, the Horns base their offense out of the Slot-T offense although they can be multiple at times as well.
“Their offensive line is senior led and they do a good job of moving people off the ball. They are really aggressive,” Martinez said.
Defensively, they run an even front with a mix of cover four and three depending on how their opponent lines up.
“I am really impressed with how fast they are on the back end,” Martinez said. “Their secondary does a great job of covering a lot of ground. Up front, their defensive line comes off the ball as good as anyone we have seen this year.”
According to Martinez, their stand-out player is their QB #7 Jonaven Gonzalez who plays safety also defensively.
Another offensive standout is senior fullback Reno Alarcon, who has 1,176 rushing yards and 16 touchdowns on 142 carries this season, an average of 8.2 yards per carry.
Coach Montalvo answered a few questions about his team and the matchup with Natalia.
What has been your team’s strength this season?
The team’s strength has been our defense and our running game,” Montalvo said. “Our speed on defense has been key.”
What has been an area you struggle, if any?
We had a few struggles early due to lack of experience,” Montalvo said. “But once we found the right fit for our players, we got rolling.
Thoughts on facing Natalia?
I think Natalia is a well-coached ball club,” Montalvo said. “They have a good QB and their receivers catch really well. They also have good size on the line.”
What will you need to do to be successful?
To be successful, we’re going to have to protect the football, play good run defense, contain and pressure the quarterback, and eliminate mental mistakes,” Montalvo said. “It all comes back to blocking and tackling and we have to do a good job at those basic fundamentals.”

Natalia Outlook
Natalia will be hungry to get back onto the field after a disappointing appearance a week ago versus the Bobcats. Natalia’s Woodson has another week of practice under his feet and should feel more like himself when he takes the field versus the Horns.
One key to victory will be how Natalia battles on the front line. It is plain and simple: When Natalia wins the battle up front with their line, they win games. When Natalia is out-worked up front, things don’t go to well.
Natalia will have to provide protection and time for their QB Woodson and also get out in space and block for their backs and receivers in order to give them an edge.
Defensively, Natalia will have to be in proper position to make plays and also tackle on first contact unlike last Friday night.
Coach Ilyan Martinez was asked how his team can put the Skidmore game behind them and get back on track for Hebbronville
“It’s not something you do overnight,” Coach Martinez said. Unfortunately for years in our program we’ve had to handle a lot of bad things and find ways to come back for more. Our kids are no stranger to adversity and our program has and will continue to be about trusting the process that’s in place and putting our heads down and going back to work. There is no secret recipe to this thing we will ride what got us here and that’s being physical and tough while out working our opponents for four quarters. We have resilient kids and I expect them to show up and play their best game on Saturday night.”
Playoff Game is set
Natalia did win the toss and elected the Jourdanton Indian Stadium as their home stadium. Had Natalia loss the flip, we would have been headed down to Laredo most likely for the playoff game this weekend.
Natalia will be the home team and there is a LARGE Indian home side bleachers that is ready to be filled with plenty of blue and white Saturday night. The weather should be great and we have a 20 minute drive compared to an almost 2 hour drive by Hebbronville. Be sure to head to J-Town Saturday night for the 7:30 p.m. battle and Back The Blue!
“We are hoping we will have a sea of blue Friday night in Atascosa County,” Coach Martinez. “Our squad has worked extremely hard to accomplish getting into the playoffs and we will need everyone behind us Saturday night.”
The winner if this Bi-District Playoff will get #2 state ranked East Bernard in the Area Round of the playoffs most likely as the Brahmas battle 4th seed Sonora in Bi-District.
Other Bi-District 15-3A vs 16-3A battles include Odem vs. Stockdale, London vs. Nixon-Smiley and Poth vs. Taft.
By Eric Smith
Staff Writer