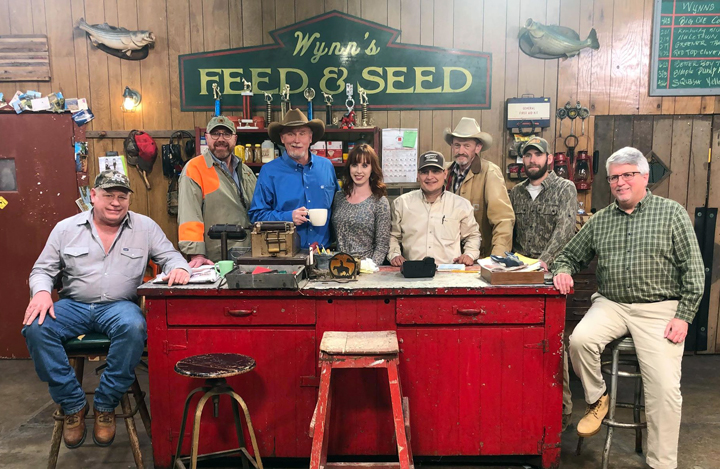 Lytle’s Gabe Garcia has put on a new hat as he takes on the role of one of the main characters in a new comedy sitcom for RFDTV. The show entitled “Wynn’s Feed & Seed, and Anything Else You Need” will premiere on RFD-TV this April.
“I play one of the main characters, named Alfonso,” said Garcia. “My character has been working at the feed store for quite awhile and is the owner’s right hand man. I’m hard working and he always has me goin’, helping him keep the store afloat. It’s a good comedy show. There’s always a couple guys in the feed store playing cards, and another guy who’s always sitting there reading the newspaper….He’s the problem-solver of the group.”
Garcia landed the role after getting a phone call from Nashville buddy and songwriter, Wynn Varbel, who plays the star of the sitcom, and owner of the feed store.
The comedy sitcom will have several guest artists on it as well, and Gabe will perform a song once as well.

“Wynn is a hit songwriter in real life, but he also plays the role of a songwriter in the show. He plays a songwriter who inherits a feed store from his dad, so he kind of takes a break from songwriting in the show, but his buddies in the music industry stop by the feed store when they are passing through town. So we’ll have a guest artist on each episode. We just filmed an episode with Kevin Denny singing “That’s just Jesse”, and we filmed one where I sing one of my songs “Country Looks Good on You”, which was written by me, Arlis Albritton, and Tommy Calame.”
When it comes to acting, Gabe says, “It’s definitely tough remembering so many lines. It’s harder than remembering songs! But it’s been fun just getting to learn something new that I never thought I’d be doing….I never thought I’d be an actor of any sort. Also being back on the TV screen again has been fun. It’s been awhile since Nashville Star, so it’ll be nice to get back out there, and I think this will just continue to open more doors for me.”
“We just filmed four episodes this week, and I’ve gotta head back to Tennessee to record more,” Garcia said in an interview this week. “We were there from 7 in the morning til 6 in the evening. We had one day for rehearsal and then we shot four of the thirty-minute episodes in about two days.”
The show is being filmed about an hour from Nashville, in Columbia, TN.
¬According to the Columbia Daily Herald, “It was spearheaded by Rory Feek and songwriter (and main star) Wynn Varble. The duo have collaborated in the past, most notably co-writing the hit “A Little More Country Than That,” which was recorded by Easton Corbin and reached No. 1 on the country singles charts in 2010.
The show is set in the fictional town of Muletown, where the main character, Varble, inherited the “Feed and Seed” shop from his late father.
The Herald notes, “Each episode centers around what he can do to “keep the doors open,” while encountering certain awkward situations, such as bringing an old business into the modern world of social media, interacting with quirky small town characters and understanding what it takes to run a feed store.”
RFD-TV is available to approximately 52 million pay television households in the United States.] It is currently carried by satellite providers Dish Network and DirecTV, as well as through cable providers such as Mediacom, Charter Communications, Cox Communications and Armstrong. RFD TV is Channel 345 (HD) on DirecTV and 231 on Dish Network.