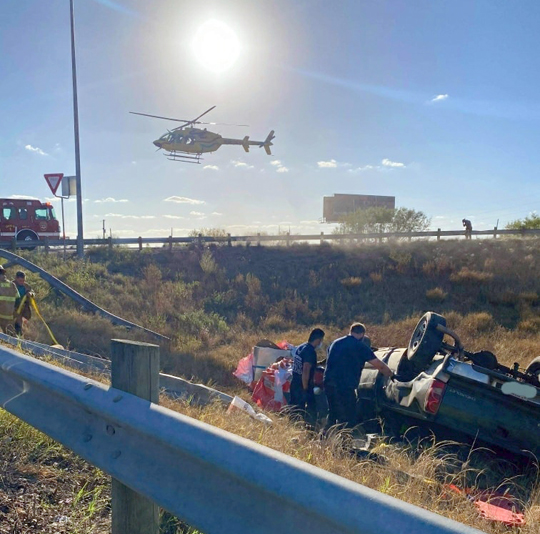 The trailer of an 18 wheeler coming around the curve struck this pick-up truck and caused it to roll down the embankment at the intersection of FM 3176 and the south bound I-35 access road. First responders were toned out for the three vehicle accident with an entrapment just outside Devine around 3pm on Wednesday, November 18th, and together, they were able rescue the driver, 60-year-old Hector Rangel of Moore.
Rangel was trapped inside the pickup truck with a 7,000 pound roll of steel sheeting pinning him inside the vehicle, and first responders worked together for close to an hour to get him out safely.
“The 18 wheeler carrying an extremely heavy load was coming up FM 3176 headed into town, and lost control at the curve right before the overpass. At that time, there was a man in a pickup truck sitting at the stop sign, and one car waiting behind the truck as well. The 18 wheeler had five rolls of steel sheets weighing about 7,000 pounds each, and as the trailer swung around, the chains snapped. At the same time the trailer struck the pickup truck and knocked it off the steep access road,” according to reports.
“The truck rolled and landed on its roof at the bottom of the ditch, where the man was trapped. One of the metal sheet rolls (weighing 7,000 lbs) was pinning the man inside the truck as it came to a stop against the door.”
Volunteer firefighters Mike Walker, Ethan Yanta, and Daniel and Austin Ehlinger responded to the scene for Devine VFD. The rescue crew hooked the heavy roll up to a winch and pulled it off using a fire truck, and then cut the man out of the vehicle. Amazingly, the man is expected to be okay.
“The man was thrown into the passenger side and entangled under the dashboard with his feet near the driver’s seat,” said firefighter Daniel Ehlinger. “So first we cut off the passenger side door to see how the patient was doing and how he was positioned. Then we had to cut off the driver’s side door very carefully as our tools were very close to the driver’s feet. It was one of the most involved extrications I’ve ever helped with, and also one of the most rewarding.”
FM 3176 was shut down to land air life, and the pickup truck driver was flown to the hospital by Methodist Air Care. First responders were at the scene several hours.
The trailer also struck the car that was at the stop sign when it swung back around.
Volunteer today
Calls like that rollover remind everyone how important our local volunteer firefighters are, and the many different ways that they help the community…not just with fires, but wrecks, and extrications that nobody else in our area has the time and training for. Only the fire department is trained to do and has the equipment to do extrications.
“There is always a need for more people to help at the fire department,” Ehlinger said. “When you see an accident like this, and you have the training and ability to help out, it’s just a tremendous blessing to me. It’s a good feeling. The fire department and volunteers play such a crucial role in a small community like ours where we don’t have a big paid fire department. When we were able to get that patient out of the vehicle and saw that he was okay, and get him off on the helicopter, that was a good feeling.”
If you would like to volunteer with the fire department, come by any Monday or Thursday night at 7pm. Monday is when meeting is held, and Thursday is the vehicle maintenance night.
Vehicle fires
It’s been a busy week for first responders with multiple fires and the bad rollover accident.
Just a few hours after completion of the first call just around 10pm the Department was toned out for a Vehicle Fire IH 35 South at MM 124. No injuries. Our thoughts and prayers are with all involved. Devine Allegiance EMS, Devine PD, Devine Fire Dept, DPS, and Medina County deputies responded to the call.
On Friday, November 20th around 3:20 PM first responders were toned out to a vehicle fire on IH 35 North at MM 119. This 18 Wheeler and cargo were burned pretty badly.
On Sunday, November 22, just after 9pm first responders were toned out for a Vehicle Fire at 127 IH 35 South at the Park and Ride. One vehicle was fully engulfed causing damage to the second vehicle parked next to it. Thankfully there were no injuries. Responding were Devine VFD, Natalia VFD, Devine PD, and DPS.
Our thoughts and prayers are with all involved. Thank you to all who assisted with these calls.
By Kayleen Holder
Editor