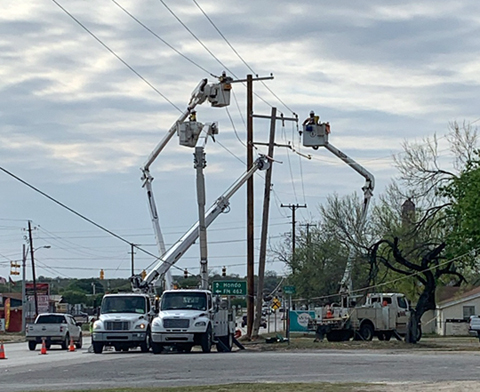 Friday, April 2nd, a driver crashed head on into an electric pole on East Hondo at Rossville Ave. and Briscoe Ave. in between the Viva Zapata restaurant and Nellie Ruth’s coffee shop. Fortunately, no one has been reported as hurt.
“The river fell asleep at the wheel of his Ford F150 and crashed directly into the pole,” Fire Chief Atkinson said. “He refused care, supposedly fine, and found a way home.”
The pole was severely damaged but not completely downed. It was a meeting point for both cable and electric lines.
“If it had gone down, the entire town would be out of power,” Chief Atkinson said. “It’s a vital junction.”
Once on the scene volunteer firefighters were called to the scene at 11:30 am to divert traffic, and make sure the scene remained safe. Even after a line crew arrived, the volunteers remained to keep an eye on the scene, not leaving until 8:30 pm, 9 hours after being called.
When asked at the scene. Chief Atkinson said, “We’re just here to keep it safe and clean for now.”
By Noah Davila
Staff Writer