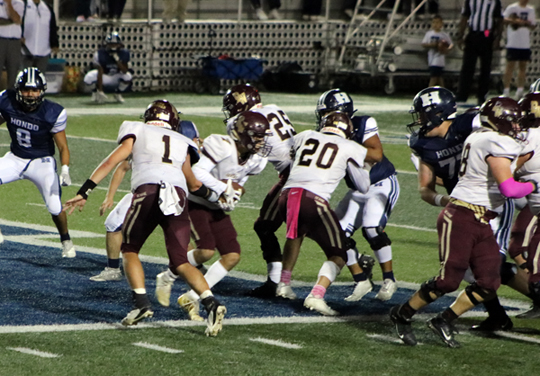 Devine defeated Hondo 33-14 last Friday night at Barry Field as the Warhorses ran for 351 yards and four touchdowns on only twenty rushing attempts. After an early score for Hondo, Devine’s defense effectively shut down the Owl offense for the remaining 47-minutes of the ballgame.
“Well, it was a much, much better night this past Friday than it was the previous Friday!” said Head Coach Paul Gomez in comparison to beating Hondo and losing to Carrizo Springs a week prior. “This was a much needed win against a very good Hondo team. I have got to give credit to our defense! They’ve been getting better every week and it is their best game to date.”
Early on, Warhorse Nation fans may have gotten to feeling a little uneasy about things as Hondo scored on a middle screen from72-yards out on their third play from scrimmage. Facing a third and long, Owl quarterback dropped back out of the shotgun position to hit running back Brandon Andreas behind the line of scrimmage to the offensive left side of the formation. Andreas got the two blocks he needed to sprint up the Devine sideline all the way to the end zone with only 0:50 off the Barry Field game clock.
Hondo did not score again until the 4:35 mark of the third quarter, after the Horses had already taken complete control of the ballgame.
“Coach Villa and the rest of the defensive staff did a great job preparing for the game. We had a good plan going in and our boys trusted it and executed well. You know our boys just played really hard, and we gang-tackled all night long” Gomez said about Defensive Coordinator George Villa and the effort of the defensive unit.
Devine’s first possession began at their own 16-yard line. A couple of runs by quarterback Brady Hackebeil and running back Gabriel Esquibel set up Ethan Santos’s first of three touchdowns on a 64-yard run. Santos outran a pursuing Owl defender to knot the score at seven with 7:59 to go in the first quarter.
Kicking off from their own 40, Warhorse kicker Luke Friesenhahn pooch-kicked the ball high in the air. The ball hit the artificial turf on the Hondo thirty-eight and bounded into the air where a sprinting Hayden DuBose gathered the ball momentarily before it fell to the ground. DuBose was able to gain possession, giving Devine the ball back in great field position at the 39-yard line.
Even though the Warhorses turned the ball over on downs at the 13, they forced Hondo into a shanked punt and got the ball back at the 32 with a fresh set of downs.
Ethan Santos quickly took advantage of the punting miscue to rush from 20-yards out to the right pylon to boost Devine’s lead to 14-7 with only a minute and some change to go in the first quarter.
“We broke some tackles early on offense and Brady finally let it loose, and man was he great! I think maybe he had been pressing and trying not to make a mistake and he has been hesitant. I told him on Monday to just let it loose and just go hard,” Gomez said about Hackebeil’s leadership and play against Hondo.
The Warhorse ‘D’ stuffed the Owls once again to force a Hondo punt. The ball took a Warhorse-bounce from the 39 back to the 44 where the Horses once again took over in great shape.

Nice runs by running back Xavier Contreras including a 16-yard burst on the first play of the possession, put the ball on the Hondo 38 yard line. Santos, lining up between the left hash and numbers streaked down the hash mark and hauled in a 38-yard touchdown strike at the eight. Hackebeil, throwing from the 46 hit Santos in stride as he got behind an apparent lackadaisical Hondo defender. The resulting 21-7 score from Santos’s third touchdown of the half held up through the first four minutes of the third quarter, although Hondo did have one opportunity to score.
Facing a 4th and 16 inside the 25-yard line a Hondo pass attempt to the back left corner of the end zone was well played by Esquibel who was the Devine defensive back defending the receiver. Devine was able to run out the clock to take the game into the break.
Esquibel and the Warhorse offense came out of halftime and imposed their running-will on the Hondo defense. Several powerful runs, including a 27-yard run putting the ball in Warhorse territory.
Hackebeil, who had already put together several tough runs in the opening two quarters, popped the Owl defense for a 40-yard score with 8:15 left in the third quarter for that frame’s only touchdown by either team. Hack’s run boosted the Devine lead to 27-7 as the extra point attempt failed.
On the play, Hackebeil took the snap directly from center and faked the pitch to Esquibel who was in motion to the left side. He completed a 360-degree turn back into the Warhorse offensive line, before taking the ball out the back right side of the formation unscathed to the right pylon for his first of two touchdowns on the night.
Hondo found a groove temporarily late in the third quarter as English hit Owl receiver Jacob Bailey for a 36-yard completion to the Devine 20-yard line. The next play, English hit a wide open Carson Winchester for a 20-yard scoring strike up the left sideline pulling the Owls closer at 27-14.
With 3:49 to go and the ball at the Warhorse 42 in the middle of the field, Hackebeil took the shotgun snap and sprinted right, high-stepping and tip-toeing his way to a 58-yard run to put the final touches on Devine’s 33-14 victory.
“Brady definitely had a great game! Not only the big runs that he had but he also threw a big 3rd and long TD pass and then threw some great blocks that resulted in big run plays for us,” Gomez said looking back at the overall performance of his quarterback.
Fittingly, on Friesenhahn’s final pooch-kickoff of the evening, an Owl returner muffed his fair-catch opportunity and Santos, yes, the three-first-half-touchdown Santos, recovered the loose ball to effectively lock up the Hondo victory bell on this beautiful Friday night.
Devine did not play a flawless game as most high school teams do not, heck even pro teams make mistakes as far as that goes.
“Did we make mistakes on both sides of the ball? Yes. But, we covered up those mistakes with effort! All of our backs ran really hard and determined! Ethan Santos had a great game as well! He did a good job trusting the play and then accelerating once he hit the hole. Hayden DuBose made some tough runs for us as well in the second half to pick up some big first downs. Special teams play was really good for us as Peyton Carr had some good punts with defenders in his face, and Luke Friesenhahn had some great sky kicks that resulted in turnovers for them. It was a great playoff-type atmosphere in Hondo! I am glad we picked up the W!” Gomez said in closing.
By Jerel Beaty
Staff Writer