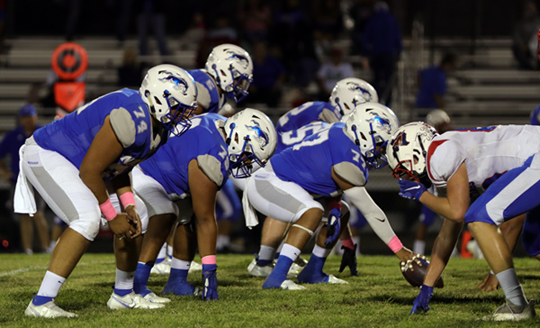 The #21 state ranked Natalia Mustangs put on a show for their season high Homecoming crowd last Friday as they dominated the Nixon-Smiley Mustangs in a 50-6 victory. Although things did start a tad slow, the Natalia offense and defense adjusted quickly and took over never looking back as they improved to 7-1 overall and 4-0 in 15-3A.
“I am proud of our team and I feel like we got better as the game moved along,” Natalia Head Coach Ilyan Martinez said. “Our offense had several explosive plays and we were able to really get our run game going for us.”
Nixon-Smiley got the ball to start the game and went to work with their Wing-T offense which gave Natalia issues in their opening drive. N-S began at their own 30 yard line and used eight plays to march to the Natalia 36 yard line before the Natalia defense rose and stopped the visiting Mustangs on a 4th and 2 play.
Natalia took over at their own 36 yard line. Natalia used ten plays to march down field with a good mix of runs and passes to get the job done. During this drive, the three biggest plays included an Adrian Vasquez 22 yard run, two big passes from QB Ryan Rizo to Gabriel Perez for gains of 19 and 17 yards. Natalia on play 10 of the drive was faced with a 4th and 3 at the Nixon-Smiley 3 yard line with 3:10 to go in the 1st quarter. Natalia’s Ryan Rizo found Manuel Garcia, who caught the ball near the visitor sideline and bulled through a defender to score. The PAT sailed left thanks to a stiff wind, as Natalia took a 6-0 lead.
On the second drive of the game for N-S, Natalia’s defense showed immediate adjustment and shut down the red and blue Mustangs in three straight plays forcing a punt.
Natalia got the ball back at their own 36 and went to work as they used 12 plays to march to the N-S 19 yard line before stalling out.
Nixon got the ball back at their own 19 with 9:22 to go in the 2nd quarter, but once again the Natalia defense was impressive holding the Mustangs to six yards on three plays forcing another punt.
Natalia got the ball in great field position after a tough punt at the N-S 44 yard line with 7:22 to go in the 1st half. After three less than impressive plays in the drive, QB Rizo found Nate Banda who made a great catch, shook off a defender and raced in for a huge 43 yard strike with 6:05 to go in the first half. The two point try failed, as Natalia led 12-0.
On the ensuing kickoff to Nixon-Smiley, the Gonzales County squad fumbled as Natalia’s Rene Vasquez recovered. Natalia took over with great field position at their 33 yard line. Natalia used three runs by Elijah Banda, a run by Nate Banda along with a Rizo pass to G. Perez followed by two Adrian Vasquez runs including one that scored but was called back due to a hold. This set up Natalia with a 1st and 17 at the Nixon-Smiley 17 with 3:03 to go in the 1st half. This time Rizo found N. Banda again as he made a nice grab and score on a slant pass for the Natalia touchdown. This time, the PAT by Manuel Garcia was good, as Natalia extended their lead to 19-0.
Nixon put together their lone scoring drive of the game on the ensuing possession. They began at the Natalia 40 yard line and marched down field using 11 plays. Nixon-Smiley capitalized on a bad call by the officials on a 4th down and 9 at the Natalia 14. The ball not only sailed over the receivers head, but out of the back of the end zone, yet Nixon managed to get a pass interference call giving them new life when Natalia had held on defense. One play later, Luke Moses found Holden Canion for a 1 yard touchdown. The two point try failed, as Nixon got as close as they would at 19-6 with 5 seconds to go in the first half.

Natalia received to start the second half of play, as Natalia took over at the Nixon 49 yard line. The Stangs used four straight runs by A. Vasquez (12 yards, 3 yards, 32 yards, 0 yards) to get down to the Nixon 2 yard line. QB Rizo was able to bull in for the Natalia touchdown. The PAT failed, but Natalia extended their lead to 25-6 with 10:38 to go in the 3rd quarter.
Nixon-Smiley got the ball back, but two plays later Natalia had their second turnover of the game as David Silva recovered the ball caused by Jaiden Burford. Natalia needed just one play, as Rizo launched a beauty over the middle that might have been slightly over thrown. This was no problem, as N. Banda showed his speed and his athletic talent as he made a great catch and raced in for an impressive 45 yard strike with 9:30 to go in the 3rd quarter. Nixon found a way to disrupt the PAT again, this time blocking it, but Natalia’s lead was now 31-6.
Nixon Smiley was able to get a rare 1st down on their next drive, but stalled out at their own 41 yard line seven plays later punting the ball back to Natalia where the Stangs took over at their own 39 yard line with 6:04 to go in the 3rd quarter.
Natalia used a nice 12 play drive with a good mix of runs and passes to march down field. Natalia’s Rizo was able to pass for his 5th touchdown of the game, as he found G. Perez for a 16 yard strike with 1:22 to go in the 3rd quarter. The PAT failed again on a rare night of attempts that were unsuccessful, but the lead increased to 37-6.
The boys in blue rose to the test again on the ensuing drive by Nixon-Smiley, as they held the Mustangs and got the ball back at their own 28 yard line with 8:50 to go in the game. Natalia used four nice runs by Luis Buentello to move down field to the Nixon-Smiley 12 yard line before Buentello had a nice 5th run in a row scoring for Natalia with 7:02 to go in the game. The PAT was good, as Natalia extended their lead to 44-6.
Natalia made one final stop, before striking for a final time in the game. Natalia got the ball back at their own 6 yard line with 3:56 to go. On the third play of the drive, Natalia’s Adrian Vasquez broke loose up the middle, showed off his speed and raced 76 yards for one final home-coming touchdown for the home squad. The two point pass failed, but Natalia took a 50-6 lead for good en route to their 7th victory of the season.
“It was a great Homecoming week and homecoming atmosphere and we want to thank Mustang Nation for packing the stadium,” Coach Martinez said.
The crowd was by far the largest home one of the season, as the home stands were full with folks wrapped around the end zone of the stadium and toward the visiting section as well which was a great sight to see.
Defensive Excellence
The Natalia defense held Nixon-Smiley to 129 yards of offense on 45 plays for an average of just 2.9 yards per play. This included 126 rushing and just 3 receiving yards.
“I was happy with our defensive adjustment which led to more negative plays in the early downs,” Martinez said. “That put them in a position where they became a little more predictable.”
Assists-Elijah Banda 7, Manuel Garcia 6, Gerardo Colchado 4, Austin Sutton 4, David Silva 4, Christopher Saldana 4, Devin Perez 3, Gabriel Perez 3, Tyler Taylor 3. Solo Tackles- Garcia 7, Adrian Vasquez 5, Silva 4, Sutton 4, Nate Banda 4, Jaieden Burford 3, Elijah Banda 3. Caused Fumble- D. Perez 1, Burford 1.
Offensive Domination
The Natalia Mustangs accounted for a season high 529 yards of offense on 57 plays. This included 183 passing yards and a season high 346 yards of rushing with 25 1st downs.
Natalia QB Ryan Rizo was 10-18-183-5TDs on the night. His go to was N. Banda who caught 3 balls for 105-3TDs. G. Perez was 6-75-1TD. Rushing- Vasquez 13-187-1TD, Buentello 11-94-1TD, E. Banda 9-35.
Turnover Battle Won again
Natalia was able to force two more turnovers during their game vs. Nixon-Smiley. For the season, Natalia has forced 26 turnovers compared to just surrendering 4 as a team.
Scoring big Points
Natalia has now out-scored their opponents 267-71 with eight games plays so far this season.
Open Week
The Natalia Mustangs will be off this week as they prepare for the District Title showdown in Wilson County vs. Poth on October 29th.
“This will be a good week for us to re-charge our batteries and focus on some fundamentals,” Martinez said. “Our goals don’t change. We know every week we have to get better and the bye week will be no different. We will focus on a lot of fundamentals this week and find ways to improve.”
By Eric Smith
Staff Writer