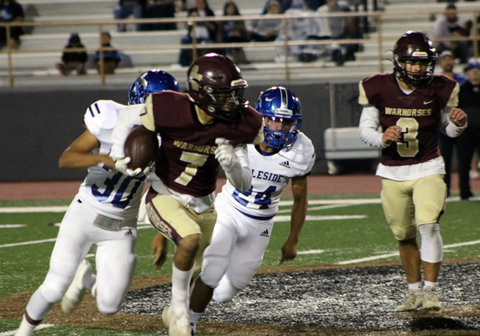 At least two crucial officiating calls that did not go in Devine’s favor squashed their feverish attempt to rally back from a fourth-quarter 24-7 deficit to possibly winning last Friday’s bi-district match up against the Ingleside Mustangs at Harlandale Memorial Stadium.
Ingleside held off the Warhorses 31-27 to advance in the state playoffs against Wimberley in Area.
The first call that went against Devine led directly to a Mustang field goal as the horn sounded going into the halftime break. Another call may have been the nail in the coffin as a pass completion by the Warhorses was incorrectly ruled an interception for Ingleside, as Devine was on a momentum-swinging drive that could have swung things heavily in their favor with nine minutes remaining in the ballgame.
“It was a tough, tough loss,” Head Coach Paul Gomez said about the season-ending ballgame. “Got to give credit to Ingleside and the coaching staff, they did a great job.”
Devine received the opening kickoff and busted the Mustang defense on a 21-yard reverse that would have put the ball near midfield. A phantom holding penalty negated the big play, and the Horses had to punt the ball after failing to move the chains.
The Mustangs scored first soon thereafter on a 4-yard run to take a 7-0 lead into the second quarter. Ingleside scored on a 31-yard pass play on the first snap of the second quarter to go up 14-0.
The Horses got on track offensively as they strung together their first scoring drive of the game when quarterback Brady Hackebeil hit Gabriel Esquibel on a 29-yard pass play that put Devine on the scoreboard. Esquibel leaped high with his back to the end zone to snag the ball helmet-high at the one-yard line before falling onto the goal line for the six-point catch, cutting the Mustang advantage to 7-0 after Caden Hanson converted the point after attempt with 7:36 on the second quarter clock.
Ingleside, benefited by gifted 30-yard completion that replay clearly shows their receiver landing with his left hip out of bounds, was able to kick a 24-yard field goal as time expired in the first half to take a two-score, 17-7 lead into the break.
Ingleside’s kicker, Brandon Hernandez, has a strong leg and is accurate. However, the 24-yarder should have been a 34-yarder as the Mustang quarterback while trying to stop the clock to get the field goal unit onto the field inadvertently spiked the ball into the center’s leg, which is a 10-yard penalty. Chances are, he would have made it anyway, but a 34-yard attempt would have been a little more difficult.
The Mustangs added another touchdown on a four-yard run to increase their lead to what looked like an insurmountable 17-point lead going into the fourth quarter.
The never-say-die Warhorses had other thoughts on their mind, however, as they put together a 20-point fourth quarter that began on a Hayden DuBose 2-yard run that cut Devine’s deficit to 13-24.
DuBose’s score was set up by a 39-yard pass completion from Hackebeil to Xavier Contreras that put the ball inside the five yard line.
Warhorse defensive end Aiden Zapata stripped a Mustang ball carrier, and Ethan Santos recovered the fumble to give Devine possession at the Ingleside 49.
On the first play after the turnover, Hackebeil launched a perfect pass to Santos who caught the ball with both hands into his chest as he fell backwards in the air. After Santos clearly hit the ground with possession, a Mustang defensive back stripped the ball away as they rolled on the ground fighting for the ball.
The play should have been ruled dead as a completion in the Warhorses favor, but Ingleside was awarded the ball on the 12-yard line. Even though Devine forced a punt on Ingleside’s ensuing possession, a great opportunity for the Horses to close the gap earlier was denied by an incorrect call on that possession.
“Ethan makes that great catch and comes down with it then after being down gets the ball taken away from him, was a tough pill to swallow,” Gomez said about a call that the whole stadium minus the seven officials saw correctly. “To have that taken away from us after getting the momentum back on our side was a tough hump to get over. Just was not the right call to make in a playoff game. I let them know about it too but obviously they are not going to change any calls and admit that they were wrong.”
A Hackebeil to tight end Mason Martinez 46-yard pass completion set the Horses up quickly at the five. Esquibel ran it in, cutting Ingleside’s lead to 24-19 with 9:01 still to play.
Although momentum was clearly on Devine’s side at this point, the Mustangs busted the Warhorse ‘D’ for a 31-yard score to jump back in front by two scores at 31-19 with 4:42 to go.

Devine scored once more, finishing off a 9-play, 49-yard drive on a Santos 11-yard reception. Contreras had a big 27-yard catch on the drive, as did Peyton Carr with his own 11 yard reception on the right sideline.
Santos’s score and Hackebeil’s two-point pass to Esquibel cut the lead to 31-27, but only 35-seconds remained in the ballgame. Devine absolutely had to get the onside kick for a chance to pull out the victory.
Unfortunately, the ball did not take a Warhorse-bounce as Ingleside recovered, and knelt the ball to run out the clock on Devine’s 8-3 season.
Defensively
Ingleside went into the bi-district tilt averaging 33.3 points per game, so the challenge was there to shut down a potent offense. Defensive Coordinator George Villa had a perfect game plan going in, but Ingleside capitalized on a couple of big plays at crucial points of the game to put points on the board.
The Warhorses held Ingleside below their typical average, giving themselves a chance to win the game.
I couldn’t be more proud of our athletes,” Villa stated after the game. “We changed up our defensive scheme/system this year because of what most offenses have evolved to and our kids did a great job adjusting and becoming a very good defensive team. We were a very physical team and it was evident because every week, I got a call or a text message from either the offensive coordinator or the defensive coordinator from our opponent, complementing our defense. We were never the biggest and fastest group by far on any given Friday night….but one thing you could be certain of when playing the Warhorses…you better be ready to get HIT!!!!”
Gomez added, “I think we had a great plan going in defensively. We caused them to change their offense just like they did to us. They hurt us in some passing situations where our coverage was just too soft and we had trouble defending the slip screen. We did a good job reading our keys and played really hard.”
Offensively
Although the Horses are primarily known for their ground game, Brady Hackebeil put on a show the last three games or so utilizing his vision and arm strength rather than the legs that rushed for over 600 yards this season.
“I am very proud of how Brady competed out there. He has improved greatly on reading defenses and it was by far his best last three games passing that he has had in his entire career. He was confident and let it loose. He had some great throws the other night.”
The running by committee benefited the Warhorses greatly this season. Utilizing a multitude of quality backs that were unselfish in sharing the workload, Devine rushed for over 3,500 yards and fifty-plus touchdowns on the year between them.
Another quality amongst the backfield players is they had the dual ability to catch the ball as well, even while in the process of Devine incorporating a new offensive scheme this season.
“Our backs and receivers did a great job making plays out there. We spread it out and found the open guys and allowed them to make plays. We have come a long way offensively. Learning a new offense and the lingo that goes with it and then expanding on it with the spread game all in one year without spring ball has been tough but our kids responded great. We got better every week and slowly began to make it our own. These guys really care about getting better. We are tough on them but they respond positively and not negatively and that is refreshing.”
Ups/Downs
The season had its share of ups and downs, just like the Ingleside game did. One thing that no one can ever accuse any of these players or coaches of is not caring enough or not wanting to win badly enough. Hard work, dedication, and desire encapsulates this entire Warhorse family.
“Our boys left it all out there and that’s all we could ask for,” stated Gomez. “Yes, I’m upset that we didn’t do enough to win that game, but I’m very proud of our boys for the fight that they had. We never gave up. I told them that there would be ups and downs in this ballgame and to just keep believing in each other and they did. They really did. All year long we’ve been the smallest team and every week we went out there and gave everything that we had. We fought toe to toe with all our foes and our boys played with so much heart. I’m very proud of them!”
Final roster
#1 Brady Hackebeil, #2 Sam Guardiola, #3 Ethan Santos, #4 Wero Torres, #5 Gabriel Esquibel, #6 Xavier Contreras, #7 Nate Ramirez, #8 Aaron Saenz, #9 Jonathan Weinkam, #10 Marcus Rodriguez, #11 Luke Friesenhahn, #12 Aiden Zapata, #14 Edwin Belor, #15 Nick Ortiz, #16 Brayden Reyes, #17 Mason Martinez, #19 Jacob Rodriguez, #20 Hayden DuBose, #22 Aiden Salazar, #23 Gus Puente, #24 Brandon Martinez, # 25 Peyton Carr, #27 Trinidad Hernandez, #30 Seth DeLeon, #32 Caden Hanson, #34 Edward Perez, #35 Tate Wisenbaker, #36 Miguel Posada, #38 Eli Contreras, #40 Jose Morales, #42 Jayson Ramirez, #44 Ryan Castro, #45 Gavin Socoras, #50 Kannon Ramirez, #51 Logan Camarillo, #52 Enrique Ramirez, #53 Ethan Appling, #54 Edwardo Gonzales, #55 Jared Fernandez, #56 Jonathan Hyzer, #58 Michael Girtz, #60 Carter Faubel, #61 Charles Key, #62 Richard Hernandez, #63 George Saenz, #64 Kolt Hackebeil, #65 Adam Guerrero, # 66 Hector Bernal, # 68 Hadyn Brumage, #70 Corey Dirck, #71 Wyatt Stevens, #72 Wyatt LaFond, #73 Mason Wallace, #74 Zack Martinez, #76 Luis Jimenez, #77 Sam Diaz, #78 Joseph Rojas, #80 Tony Saldivar, #81 Ayden Leal, #82 Alfredo Ramirez, #84 Samuel Mills, # 85 Tyler Pike, #86 Teotimo Stafford,& #88 Matthew Gomez.
By Jerel Beaty
Staff Writer