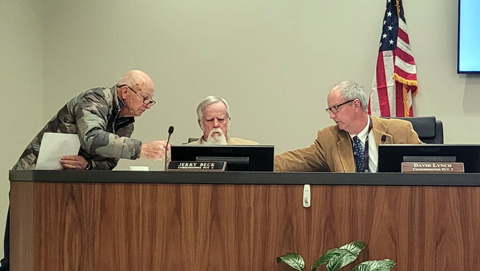 February 10th, 2022 the Medina Commissioner Court meeting began with a presentation of an award to the County, held a lengthy discussion on a potential Master Drainage Plan by Westwood Engineering and ended with the approval of a study on potential ways of alleviating traffic in Castroville. Commissioners Jerry Beck, David Lynch, Judge Schuchart, and Commissioners Larry Sittre and Timothy Neuman were all present for the 10 a.m. portion of the meeting.
Subdivision Approvals
The court then moved on to approving several items involving subdivisions, starting with the re-visitation of the preliminary approval of vacate and replat Lot 17 of Peanut Valley Subdivision; Located in Precinct 3 off of County Road 6825. During it’s original court date January 13th, 2022 Rakowitz Engineering & Surveying request for a variance to Section 6.2.3.4. of the Medina County Subdivision regulations specifying that the minimum frontage on every lot be on a County Road be 60ft was denied, leaving the Rakowitz to search for another way to get around the issue.
Narrowing at the front and tapering at the back, making the property into a ‘pizza slice’ shape, it failed to meet the minimum frontage rule of 60ft for every lot located on a County Road. Returning this week a Rakowitz representative presented the idea of dedicating .14 acres of each of the three lots at the front of the plat to the County in order to make up the difference.
This plan was approved by the court and after tabling the preliminary approval of Rihn Acres Subdivision, precinct 3 off of highway 173 the court then approved the Master Development Plan for Megans Landing Subdivision; located in Precinct 2 off of FM 1957, with 156 lots each being half an acre in size.
Immediately following this the court quickly approved the release of the Maintenance Bond of Hunters Ranch Subdivision, Unit 8; located in precinct 2 off of FM 1957 (Potranco Road).
Westwood Engineering Flood Prevention Plan Presentation
Next Mark Miller, from Westwood County Engineering took the stand to introduce Alan Stanton, Drainage and Flood Control Leader as the head of the coming conversation regarding identification of projects and funding sources for ongoing flooding issues.
“He’s here to talk about what you said: to identify quadrants in Medina County and funding mechanisms to create projects to get some of those flooding issues addressed,” Miller said.
Stepping away, Stanton took his place and began to paint a fuller picture on the potential of implementing a Master Drainage Plan (MPD) to the court.
“Master drainage plans address the needs for current and future drainage infrastructure, needs to mitigate flood risks for residence, businesses and roadways,” Stanton said. “…the process of a master drainage plan is to facilitate public input meetings, discussions, gather historical data, update flood risk maps with new data, identify all the buildings, residences, the commercial properties, and roadways in the flood plain; develop short and long term plans and identify funding mechanisms…A proactive drainage plan will increase the resiliency of the medina county against flooding …”
Stanton then presented a small map, explaining to the court how it showed that all four precincts had major flood risks, identifying that over 2200 new properties were in these effective flood plains. He also said that this was likely less than the actual number as well as the Federal Emergency Management Agency (FEMA) map shown had been completed in the early 2000s and the county had grown since.
“Our team has completed some of the MDPs for cities and counties in South Texas and we’ve had success in getting the projects funded and constructed and its important to have this plan in place before other opportunities come,” Stanton said. “And as ya’ll are having more development, to also minimize risk to newly proposed developments and existing developments.”
When asked by Judge Schuchart to elaborate on how the plan process would work, Stanton answered that the plan would look at every problem and then identify alternative forms of costs to address them.

‘Spirit of Health’Award Presentation
Cody Knowlton, President and CEO of Baptist Health Foundation San Antonio (BHFSA), alongside Chairman of The Board Dawn Stockton kicked off the meeting with a presentation of the Baptist Health Foundation of San Antonio 2021 ‘Spirit of Health’ Award to Medina County.
“For outstanding leadership and courage in the COVID-19 pandemic,” Stockton said.
According to Cody Knowlton, the presentation also comes with a $1000 award usually given to a non-profit within the county receiving the gift. For Medina County, that would be HANK, Inc. Knowlton then followed this up by explaining the BHFSA’s history with the county and what led them to eventually giving out the award.
“… that award typically goes to an organization or individual who’s improving the health of our community but it typically goes to one group, one individual,” Knowlton said. “This year our board chose to give that award to each of our eight counties and so we’ve been going around making this presentation to each of our counties and are honored to finally be here today to give the Spirit Of Health Award to Medina County.”
Knowlton said that in the past the BHFSA has given over 8.6 million dollars in grant money to the eight counties to give to their various non-profits.
“And one of those was right here in Medina County, the Medina Healthcare fund, which received from us a $125,000 grant for extra equipment.”
Knowlton said that he’d just learned that day that since 2006, Medina has received over 1.4 million dollars from their foundation and given it to their fund, just adding to the reasons the foundation had to present the council, one behalf of Medina County, with their award.
County asks TxDot for route around town due to traffic from new subdivisions
The Medina County Commissioner’s Court discussed the need for traffic alleviation due to the booming subdivisions in the Castroville area where subdivisions cropped up on most of the farm land.
At the last meeting, the court moved to approve the action of making a request for TXDOT to make a study of an alternative route or bypass around Castroville to help alleviate traffic problems.
“… just something to get around Castroville to alleviate traffic problems. I mean the whole county drives through Castroville on any given day, and runs into a traffic problem and it’s only going to get worse,” Judge Schuchart said.
Commissioner Sittre closed the short discussion as he made his urgency on the need for this potential traffic solution clear.
“I don’t care if I’ve got to go around it over it, it’s got to get done,” Sittre said.
By Christian Toler
News Correspondent