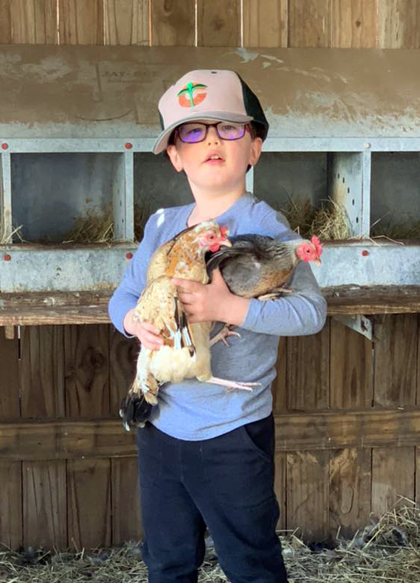 A child with special needs gets to keep his roosters after the Devine City Council granted his family a variance to that effect during the Special meeting on Tuesday, November 24.
Jeffrey and Summer Cannon, who reside on Malone Drive, requested the variance to Chapter 14 of the City’s Code of Ordinances on behalf of their young son, who has medical issues that include severe anxiety.
The Cannons’ request included letters from Kandi Morris, a Licensed Professional Counsellor, who concluded that the boy “meets the definition of disability under the Americans with Disabilities Act, the Fair Housing Act, and the Rehabilitation Act of 1973,” and requested that he be able to keep his roosters, Nitro and Jack, as they provide emotional support.
Nitro came to the family injured and unable to crow, though Jack does.
According to a letter signed by the Cannons, one of the greatest triggers for their son’s anxiety is separation, and that removing the chickens would have a significant effect on him and the family.
“His chickens give him purpose, as he tells us he is a Chicken Farmer,” the Cannons wrote. “He helps clean their coop, delivers hay with his Power Wheels truck, and says it is a delivery from Tractor Supply, feeds them and gathers eggs daily.”
District 3 Councilman David Espinosa thanked the family for providing a detailed request.
“On my behalf, personally, I’ve got no issue with granting a variance,” Espinosa said, and made the motion to do so.
District 5 Councilwoman Debra Randall, who represents the Cannons, clarified that only one of the roosters crows, and asked if any neighbors minded the crowing.
One neighbor, Kevin Stephens, said there are roosters all over town, and requested that Council grant the variance.
“This is a different situation for this young man that’s here,” Stephens said. “This child has a disability, and this is a comfort for this child.”
District 2 Councilman Steve Lopez said he was also in favor of granting the variance.
Mayor Cory Thompson said that he hated granting one-time variances.
“So if y’all want to grant the one time [variance], fine,” Thompson said. “Then I would go ahead and recommend to Council we go ahead and look into this whole Chapter 14 and consider amending this entire chapter accordingly at a later date.”

Council amended several chapters of the Code of Ordinances during 2020 and also worked on Chapter 14, Animals and Fowl. Amendments to that Chapter were passed later in the meeting.
District 4 Councilwoman Kathy Lawler pointed out that the Cannons’ variance request is due to special circumstances.
“I know,” Thompson replied, “but like anybody on Council will tell you, whenever we’ve had other one-time items come in, I’ve warned Council, or let Council know, that one time really means every time because that’s just the way it ends up working.”
“Yeah, we’re opening the door,” Randall said.
“I have no problem with it, but I’m just recommending to Council that we go ahead and look at amending this whole chapter, Chapter 14, I guess for fowl or for chickens or whatever at some point to correspond with the allowances that we’re making,” Thompson said.
Espinosa said that other animals that are also prohibited by Chapter 14 are kept in town, and that the City isn’t enforcing the Ordinance.
“We need to go back and look at this,” Espinosa said. “We’re not really enforcing this. [But] For this particular young man, absolutely, let’s do it.”
District 1 Councilman Rufino “Flipper” Vega provided the second to Espinosa’s earlier motion to grant the variance, which passed 4-1 over Randall’s objection.
“I’m gonna vote against it,” Randall said after the motion passed, “although it’s passing, because everybody else is going. I don’t want to open the door for the whole entire town.”
“It’s not the whole town that needs this,” Stephens said from the audience.
“I’m sorry, but that’s what I’m afraid of, and I don’t want to do it,” Randall said.
Chapter 14 amendment
Later in the meeting, Council passed Ordinance 11-20B amending Chapter 14 to require that dogs and cats within the City limits be registered with the City. Registration can be done via microchip or tags, and dogs and cats must also wear collars that include owner identification and rabies vaccination tags.
Failure to do so is a misdemeanor punishable by a fine of not less than $1.00 and no more than $2,000.
The Ordinance goes into effect on January 1, 2021.
Rabies vaccinations must be kept current and registered with the Devine Police Department once every calendar year.
By Marly Davis
Staff Writer