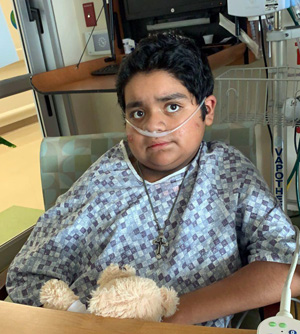 The Hondo community has been hit the hardest in recent weeks. Covid is pulling the heart strings of local families, seeing so many of our kiddos struggling so unexpectedly. In a very short time frame, three Hondo students that we know of have been battling Covid so severe that it put them in the ICU and one on a ventilator– Caleb Ramirez 12, Jonathan Lee Hernandez, 14, and Robert Gonzalez, 16. Two of their siblings, senior Natasha Campos, 18, and Alexis Gonzalez, 18, were also hospitalized.
This is by no means a complete count as the number of hospitalizations in the county are no longer reported routinely; these are just a few of the families who have shared their stories with the community. As of last week, the school district had 55 active Covid cases in students and seven active cases in staff. A prayer vigil was held in the community last week.
Caleb Ramirez, 12 still fighting in the ICU
One of those students, 12-year-old Caleb Ramirez, is still in the ICU, and his mother says today marks 19 long days there by his bedside, however she is so grateful that he is now off the ventilator.
“Caleb is doing better. He was able to start eating and sitting in a chair and trying to stand on his own. He is still very weak in his muscles, but I push him to keep going,” said his mother Mrs. Elizabeth Campos. “He has a long recovery road ahead of him, taking baby steps, they said for now. But I’ll take anything. I’ve waited so long for this moment.”
Shortly before being put on a ventilator over two weeks ago, he wished for a teddy bear from the gift shop. Last Wednesday, she said, “He was taken off the ventilator today, and what a better way to wake up, to a teddy bear somebody sent him. God is good, and so is everyone who prayed for my son and also my daughter Natasha who was hospitalized 11 days.”
You can also send Caleb Ramirez a gift from the Methodist Children’s gift shop to cheer him up.
Jonathan Hernandez, 14, hospitalized
Fourteen-year-old Jonathan Lee Hernandez was admitted into ICU and spent several day in the hopsital. He tested positive toward the end of August, and things took a turn for the worse about a week later.
“He started with allergy symptoms, and then on Friday evening started getting a high fever that lasted through Tuesday. There have been lots of ups and downs, mom says, “At first we were trying to fight the fever which got up to 103.9, and then after the fever broke, his oxygen level went down, and made it worse, because then he was fighting for air.”
She is so grateful for the friend who suggested getting a pulse-ox to monitor oxygen saturation levels, a simple device that clips onto the patient’s finger.
“I started monitoring his oxygen level Wednesday-Sunday and noticed it was going down,” said his mother Dora Miranda.
“That’s the only reason I was able to get my son in time to the emergency room in San Antonio, and then he got transferred downtown. His oxygen level was down to 87, and by the time we got to the emergency room, it was down to 82. I never knew oxygen level was so important when it comes to Covid, and the way it attacks the lungs. You have to be careful of blood clots, and it is a good thing I started monitoring it before it attacked his lungs more. I didn’t know he was struggling to breathe until his oxygen level was already hitting 88-90,” Miranda added.
Going on Day 6 this Monday, she is grateful that she is able to be by her baby’s side.
A friend who started a Go Fund Me for the Hernandez family stated, “She will need to stay by her son’s side and no work means no income. If you have it in your heart, please donate, and if you can’t, saying a prayer for Jonathan would be such a blessing.”
The Go Fund Me is organized and listed under family member Tammera Hernandez in Hondo, TX. If you would rather mail a donation, you can mail it to Dora Miranda, PO Box 694, Hondo, TX 78861. You can also send Jonathan Hernandez a gift to cheer him up. Message his mom on Facebook for details.
Robert Gonzalez III, 16, recovering after 6 days in ICU
Robert Gonzales III, 16, is now at home recovering with family, along with his sister, a 2021 graduate, who was also hospitalized.
You could hear the sound of relief in the voice of Mr. Robert L Gonzalez, Jr, last week, as he gave an update on his son, a Hondo varsity football player Robert J Gonzalez III, who was battling Covid in the children’s ICU. After many days of not eating, and needing heavy hi-flow oxygen to breathe, the16-year-old is finally smiling and able to walk around again.
“My son is recovering thank God, and he feels 90% of himself,” Mr. Gonzalez said.
Before he even left the hospital, Robert was lifting weights with physical therapists in the ICU, to exercise his lungs and get his strength back. He is always preparing for that next football game under the Friday night lights he loves so much, and he can’t wait to get back.
In an interview last week, while he was still in the ICU, his father shared what Robert’s battle has been like.

“The prayers are working. My son is smiling and getting his strength back,” Mr. Gonzalez said, adding, “He is one of the biggest, healthiest kids on the team. We never expected it to hit him like this. With as healthy as he is….When it dropped my baby boy like that, I was like what can Covid do to other people? It scared me. It gave us a run for our money.”
This all started on Friday, August 19.
“We had gone to the scrimmage in Poteet, and from that day on he started saying he was feeling dizzy and achy, especially his back ached. We thought it was just the heat. He did okay a couple days, and then on Sunday, my wife took him to the ER to get tested. But they said it would take five days to get the results. Before we got the results, on Wednesday, he started getting really nauseous. Thursday, he started going down on us. By Friday he was feeling really bad, and was lying in bed watching the football game when he fell asleep. Around 3 am, we heard him and we ran in there and he was just shaking and gasping for air. He said ‘Dad I can’t breathe.’ With the chills and sweating, he was soaking wet like he was swimming.”
EMS arrived and transferred him to Methodist Children’s in San Antonio.
“They put him on oxygen and they kept having to use more and more, each time he had a coughing fit. It got to the point where he was on a very high amount of oxygen and vapotherm,” Mr. Gonzalez said. “He was also having chest pains, so the doctor said he might have possible blood clots in his chest.”
In the middle of all this, Robert and Maria’s daughter came up positive too.
“What my son and daughter told us when we started video chatting, that’s when I just really broke down,” Gonzalez said, with a crackle in his voice. “They didn’t even want to see each other, because she said ‘I don’t want to see my brother like that.’ And meanwhile, he was telling my wife, “I don’t want to see my sister like this in here.”
Thankfully, doctors and nurses delivered good news that no one expected so fast.
“Today (Wednesday, August 1), has been a really good day,” dad said. “They have been able to lower my boy’s oxygen more and more to 10L at 40%. He ate a hamburger today, and that was good to see. He hadn’t eaten in 6 days.”
“He went from the worst to…With God’s blessing and prayers, he is recovering dramatically,” Mr. Gonzalez said. “Compared to 24 hours ago, the doctor said, it is just amazing. My boy went from barely being able to move and not eating anything, to smiling and getting his appetite back.”
“He is a great kid. He is the kind of person who would give you the shirt off his back,” said dad, who can’t wait to see his boy again.
Thankfully, mom is right there by Robert’s side, but only one parent was allowed.

“She wasn’t about to let her baby boy out of her sight,” Gonzalez said, glad that she is fully vaccinated and that he too had gotten his first shot, so they can be there for the kids (one sick at hospital and one sick at home). “Knock on wood, even having the contact that we had, neither me or my wife has gotten sick. That’s another miracle.”
RG3, as the Hondo Owl football team affectionately calls him, can’t wait to get back on the field and neither can his teammates and fans.
“He hated missing that last game when was sick, and I feel sorry for the quarter back of the opposing team when he gets back in the game, because there’s going to be a lot of sacks!” said dad, his #1 fan, with a smile.
The family has faced many tough circumstances, with severe tornado damage to their apartment back in April, to going back and forth and staying in hotels to care for sick kiddos this August.
“The way the community came together…we are so grateful to the whole community. They are angels. They don’t know how much it means to us. I could never put it into words,” Mr. Gonzalez adds. “And those football moms, they are all watching over him as their own.”
Not long after this article, Robert’s sister, Alexis (a 2021 graduate), was also hospitalized, and because she is 18, mom and dad were not allowed to stay by her side. Thankfully, she was able to return home after a short stay in the hospital.
If you were unable to attend the benefit for Robert Gonzalez III’s family, but want to make a donation, you can reach out to Shannon Zepeda on Facebook or mail a donation to Robert Gonzales at 2208 14th Street, Hondo, TX 78861.

Editor’s note: This article was updated to the print edition on Sept. 9, 2021.