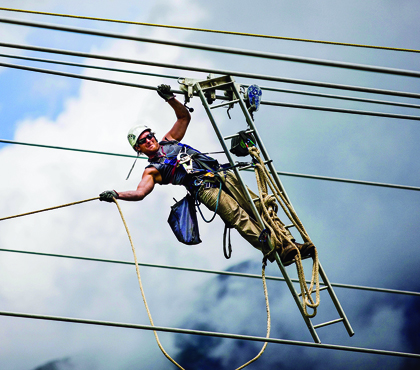 Like the rest of Texas, our local Medina Electric Coop was also hit hard by forced outages. There were as many as 8,000-12,000 MEC customers who were without power at any given time from early Monday morning until Wednesday. That’s roughly a third of their 32,000 customers, with some forced outages still ongoing throughout the day Thursday.
“We had a plan. Everyone had a plan, but this was way beyond the worst case scenario,” said an exhausted Medina Electric Communications Supervisor, Katie Haby. “It’s fair to say an event of this nature and magnitude has never occurred statewide, and we hope it never does again.”
Forced outages over 24 hours have never occurred for Medina Electric customers until this past week when some were without power for 30 hours.
“From 1:47 AM Monday morning until Wednesday we had an average of 10,000 offline at any given moment,” said Haby. “What happened is a lot of generation went off line all of a sudden, so our supply had fallen by a large percentage. Simultaneously, the demand for power and heat was going up.”
All electric companies were asked to shed their fair share of the load percentage wise, so why some other providers, like AEP in Devine and Uvalde, had forced outages lasting for days on end is unknown.
Before the lights went out in Texas, many will recall a TV news meteorologist stating “Every single county in Texas is under a Winter Storm Warning. You may never see this again in your lifetime.” In the days that followed, national news sources like the Washington Post described Texas as “Ground Zero” for the Winter Storm that caused power outages in over 4 million households in Texas.
A Medina Electric representative, who cannot speak for other companies, did their best to explain and answer all of the questions locals are asking about how MEC was affected.
“What happened to the rolling 30-45 minute outages we expected, is that ERCOT had to ask us to shed more and more load,” Haby explained. “So we would turn one feeder off, and within minutes, they had to ask us to shut off another feeder and another. Some of those feeders are in groups. That made it hard and complicated to keep outages ‘rolling’. It’s not as simple as one for one because different feeders carry different loads, and there are some feeders that we cannot shut off, and then there were layers of feeders that acted as our fail-safe.”

Medina Electric has about 90 feeders, and about half of those had forced outages. Less than 10% serve critical loads, which cannot be turned off. Critical loads include hospitals, natural gas plants, etc. The remaining feeders are in three different groups and are basically a fail-safe; if things get even worse, they are immediately shed to keep the grid operating, no questions asked.
“Sometimes our forced outages were compounded by actual damages. On top of that, it was hard for our linemen to find the problem or to know if they fixed the problem when there were so many forced outages in the area,” Haby said.
The differences in the way systems are set up in the big cities and what you see in rural areas matter too. In a big city, feeders can be very dense, which could possibly make it a little easier to roll outages.
“Ours are spread out amongst almost 11,000 square miles in 17 counties, all the way from Hondo down to Rio Grande City and west to Uvalde,” Haby said.
Nearly every electric company in Texas is part of ERCOT, with the exception of a few near the borders of Texas, for example, that can connect to another power grid in another state.
“Everybody is angry with ERCOT right now, but had ERCOT not taken the steps they did, it’s impossible to say what might have happened.”
In short, if the power grid would have truly failed, it could be catastrophic and caused a lot of damage that would take a long time to rebuild.
Medina Electric Coop also wants to assure customers not to panic about the information in many news stories about electric bills. They can’t say what the exact impact of this unprecedented event will be, but it won’t be the outrageous $6,000 bills some companies are reporting.
“The honest answer is we don’t know the exact cost impacts yet,” Medina Electric CEO Mark Rollans said in a press release. “We can say that we do not expect a drastic spike like many other utilities are predicting for customers.
“The incredibly high bills you are seeing in news reports are for people who buy electricity from providers who are heavily involved in market pricing. Do not use those news reports as your gauge for what your bill might look like. That is not the situation for the cooperative. We purchase power through our wholesale power supplier and they own generation, or what is used to produce power. This means they do not have to make market purchases like some other participants do,” they added.
They note that because of the thousands of forced outages, it could take weeks to sort through all the data to determine exactly how many were forced outages versus damages.
By Kayleen Holder
Editor