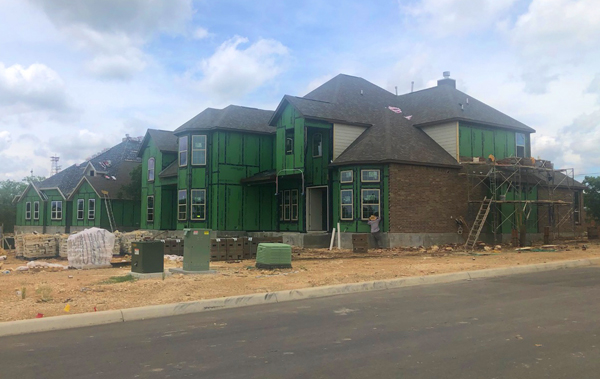 MEDINA COUNTY– No. That headline is not a misprint. Medina County Commissioners expect another 17,000 new homes coming to Medina County in the next few years. The Castroville area, once surrounded by farmland with of rows and rows of crops, is now filled with rows and rows of half million dollar homes in gated subdivisions. The growth yielded 8% more property tax revenue for the county last year, but it also caused homes and land all across Medina County to increase in value which then increased the average tax bill by 7% very quickly. This year, the valuations have gone up even further. Many property owners are seeing their property taxes increase by 40% – 60% in one year, and according to authorities this is largely due to a rising number of home sales, and the rising average cost of the homes being sold in Medina County.
While a homestead is limited to a 10% increase per year, land is not. We asked the Chief Appraiser for Medina County to explain what’s happening in the local area, and she stated, that the market is driving the value increases as well as the cost to build new homes. Most of the growth is in Precinct 2 (Castroville area). Pct 2 Commissioner Larry Sittre had some very interesting things to say about the growth in that area, which he calls “astronomical.” And that’s no exaggeration.
When asked for a specific example of what’s driving the market up so suddenly, Medina County’s Chief Appraiser, Johnette L. Dixon stated, “We show the average residential sale in 2019 was $222,390. In 2020 the average residential sale was $257,590.”
That’s an increase of over $35,000 in one year on the average home sale in Medina County.
“The figures were based on the 458 sales we had in confirmed in 2019 and the 545 sales we had confirmed in 2020,” Dixon adds.
By comparison, just four years ago “in 2017 the average sales price was $171,174.”
That’s an increase of $86,416 when compared with the average home sale just four years ago.
“We have to appraise properties at what it would sell for based on what similar properties have sold for. The Comptroller’s office audits us every two years and verifies that our sold and unsold properties are appraised at the same values within 5% below and 5% above market values. If we are below the 5% mark the school’s state funding may be compromised and if that happens then more of the burden falls on the taxpayers. The market is driving the value increases as well as the cost to build new homes. There are some cases where buyers are paying more than asking price. I believe the biggest factor right now is the supply versus the demand. The demand is greater than the supply in some areas which will drive the market up,” Dixon also explained.
Commissioner Sittre stated that there are an expected 17,000 homes that the county has either approved plats for or has pending plats for. He is seeing 1 acre selling for as much as $35-$40,000 and up to $50,000–just an acre of land with nothing on it.
“17,0000 is equal to about 1/3 of the county’s current population, and all of this development is happening right here in 5% of the County,” Sittre said. “All of these subdivisions are in Medina Valley ISD.”
When discussing the population growth that comes with 17,000 homes, he stated “I am told that the homes valued at around $250K have an average of 4.5 kids and the homes valued at $600K and have an average of 1.5 kids that will be coming into the district. The school district is going to need another high school in the next 2-4 years definitely. And school districts are going to have to get creative at how they spend money.”
Medina Valley ISD has rapidly expanded, and is scheduled to be opening their 5th elementary school this Fall. They have 2 middle schools as well, and a new high school will be needed soon.
“The majority of the new 17,000 homes will be above $300K. The lower end is $275K. The average is close to $350-$400K. On Potranco Ranch, those houses are building up to $600K. In Potranco Acres and Double Gate, they are averaging $700K. These are all gated communities.,” Sittre said.
“As an elected official this is what I have fought for. If not for the first TIRZ we did, than the Potranco Ranch development would have been a trailer park. As you can see, I have a lot going on, I don’t just sit around and wait for a commissioners court meeting. I am in the middle of getting quality homes built, meeting with developers, engineers, attorneys weekly. Anyone can sit back and get a trailer park, I have lived in hone, no one wins but the mortage companies, everyone else loses.”
While the values of these new homes is greatly affecting the values of homes that have been here for years, Commissioner Sittre asks residents to look at the way the State is driving taxes up.

“Only about 35% of your tax bill goes to Medina County itself, and that funds the sheriff’s department, courthouse, and precinct operations,” Sittre said. “What do you want us to cut? Randy needs more deputies to keep up with the growth. We needed a new courthouse. We haven’t had a courthouse built since 1887. We now have two new precinct offices in Devine and Castroville. Before we were renting some property and that doesn’t make a lot of sense.”
“A lot of people don’t realize how much the State does. They State can raise the taxes on your homestead by 10% every single year, yet they tell us 3.5%. Why don’t they stick to 3.5%? I wasn’t happy when I saw my tax bill this year either, and I went straight to my representative who said ‘Larry, we have to get these tax valuations up to what they actually are.’ If your neighbor sells their house for $300K and it’s a similar square footage to yours, guess what yours is worth?” Sittre said.
“The big ranches are disappearing fast. Every single ranch north of Potranco Rd is sold, or about to be. I have seen thousands and thousands of acres in Medina County sold just this past year. The big question is if you’ve got 500 acres and you’ve got 5 kids, what do you do with it when you pass on? Most ranchers are just selling the land and dividing up the money. It’s the easiest thing to do. Working cows is a dying trend. I’ve got land, I’ve got kids, and not a single one of them has come out to help me work the cows.”
Much of the growth was sparked by a TIRZ that the county offered a developer in 2008. The positive and negative impacts can be debated all day long.
“If we hadn’t of made that a TIRZ, Potranco Ranch might have been a trailer park. Instead it is a gated community building out homes up to $600K. We get 30% of the property tax revenue on those new homes for another six years or so (the developer gets the other 70% per the incentive agreement). Still, it’s a lot more revenue than we would get off of a $100,000 home even at 100%.”
One Devine area resident in Medina County, James Hughes wrote a Letter to the Editor which stated, “35 years ago I bought an undeveloped track to land in Medina Co. I planted an orchard, and built my own home. I would much rather stay on my property that I have built, maintained, and improved. These ever-increasing value ratings will someday force me off my land.”
Tax Rates vs Rising Valuations
“I want everyone to know that Medina County’s tax rate is lower than all of the surrounding counties. We have no control over the valuations,” Sittre said. “The county funds we have coming in is going to allow us to reduce taxes in the future. We are working on the budget right now and I invite anyone to come and listen. Although we are expecting this growth we do not use projected revenue in our tax budget.”
About 3,000 of these new high-end homes have already been built out in Medina County, beginning in 2008.
“When I got into office, we had a revenue of 1.8 billion. Right now, we are close to 3.4 billion. Most of the growth has come in the last four years. We have no control over the home values or appraisals,” Sittre said. “My appraisals increased by $700K, and I am not happy with my tax bill either. But I am not going to put the county in jeopardy by lowering taxes to a point that we are going to be struggling. Our bills run about $30M, and we keep $10-$15M in the bank in case anything happens,” Sittre said.
What happened to property tax rates last year?
The county’s proposed tax rate was actually 0.8 percent lower than in 2019, but higher appraised values pushed the average homestead tax bill up 7.46 percent.
Back then, an average homestead property was valued at $164,939, and the the increase amounted to $63, according calculations by county Tax Collector-Assessor Melissa Lutz last year. Total tax levy on all county properties was projected to rise to $20,606,728 — an 8.04 percent increase over 2019.
Commissioners’ Court agreed on a tax rate of $0.5473 per $100 of assessed valuation, with everyone voting in favor except for Beck, who abstained from voting and said that he preferred a lower tax rate which would have kept bills at 2019 levels.
While they lowered the tax rate, the actual revenue they took in is much higher, due to the higher valuations in the county.
For that reason, Beck said commissioners could afford to give taxpayers a break. He noted that the county has been able to put $1 million into its reserve fund annually, while granting raises to employees.
Schuchart said he was reluctant to reduce the tax rate any further at that time, as were other commissioners.
“I would rather wait until next year, hopefully after COVID goes away,” he said. “We should be grateful we’re in a county where [property] values are going up. Think what you’re leaving your kids.”
Beck countered, saying that rising appraised values only help “if you’re in the profession of flipping houses.”
Commissioners’ court will be discussing the budget and tax rate soon for this year. Their scheduled meetings are posted on medinacountytexas.org.
Home Values
The average home in Medina County is far from the average value of the 17,000 new $400K-$700K homes being built in the new subdivisions around Pct 2 of the Castroville area.
Average Home Values for Medina County were as follows:
2017 – $138,052
2019 – $155,957
2020 – $169,092
The 2021 preliminary average home value is $201,368.
By Kayleen Holder
Editor